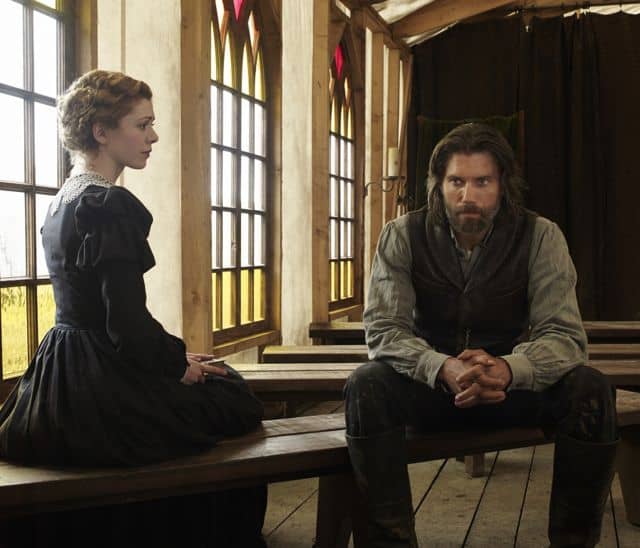 AMC’s HELL ON WHEELS has been back a couple of weeks now, and the third season so far has really shown growth over the first two. There are new characters, new scenarios, and most of the threats come from the outside, rather than internal conflict these days. It’s been quite exciting.

As the season premiere, “Big Bad Wolf,” opens, Cullen Bohannan (Anson Mount) is living in a barren, ice-covered land by himself. Seeing the wolf attack him, finding his dead friend, and watching our hero succumb to cabin fever is almost like watching Cullen die, only to be re-born again as he takes the train to New York City, after a stop along the way to pick up Elam (Common).

I like this Bohannan. We’ve seen a few different sides to the character already, but this Bohannan feels like I imagine the original Bohannan was, prior to the strife in his life, before the war and losing his wife. He is a good man, full of virtue, but also one whom can square himself with reality, rather than just spouting ideals. He does the right thing, and is concerned about his sins.

We see a lot of this when Bohannan visits a couple of churchs and talks with Ruth (Kasha Kropinski, now a main character). She judges him for the sin of killing men, and at first, he takes offense. Upon reflection, though, he realizes she is sort of right, and he needs to not only be sorry, but try to find a better way.

Not that getting out of killing is easy. In “Eminent Domain,” Bohannan has to evict a Morman family off of their land. One of them shoots the police chief, and Bohannan has to dole out justice. Is he right to hang the boy who is said to have pulled the trigger? Well, that may be arguable, but in keeping with the laws and doing no more than what is required to keep the peace and order, Bohannan stays on the right side. He feels some sort of regret at the boy’s death, but he isn’t haunted by it much, nor should he be. Fans of the show will think more highly of him than he does himself for his behavior.

Viewers may not be the only ones to admire Bohannan for long. A dogged, determined reporter named Louise Ellison (Jennifer Ferrin, the latest addition to the cast) comes to Hell on Wheels to write a story about the railroad and finds Bohannan far more interesting. Maybe her interest in him is strictly professional or maybe its romantic. Either way, it not only gives us an opportunity to see Bohannan through different eyes, but could improve the character’s position in life, so her presence is welcome.

As good as Bohannan might seem to be doing, he has no shortage of obstacles to overcome this year. Indianas pose a threat, The Swede (Christopher Heyerdahl) has survived and will presumably makes his way back, Union Army soliders tasked with protecting Bohannan’s crew are uncontrollable and brutal, Sean (Ben Esler) has made a bad deal that casts him as a secret mole, and Durant (Colm Meaney) will do everything he can to sabotage Bohannan so he can take back the project.

Is Durant HELL ON WHEEL’s ultimate villain? Vanquished at the end of season two, he slimily maneuvers his way out of jail and is soon the bee in Bohannan’s hat. He is not easy to get rid of, always working a new angle, and rarely in the public eye when doing so. It makes for some great scenes between Bohannan and Durant, including a recent one at a table with a corpse, and gives the series a pivotal relationship that should serve it well until the conclusion of the final season. Or Durant could die next week and be gone, which would be a shame, but not completely out of left field, considering the setting.

Death hangs heavy in the third season of HELL ON WHEELS. We’ve watched characters die, sure, but with main players taken out and danger all around, suddenly things seem to be just a little bit closer to the edge. Eva (Robin McLeavy),in particular, worries about Elam, especially when Elam’s predecessor as the enforcer in charge is murdered. The show is taking more care to convey the seriousness of the predicament the cast finds themselves in, and it provides an added interest level.

Basically, life on the frontier comes with risks, and while our beloved characters may seem up to the challenge, there is no guarantee. As heartwarming as it is to see them all reunite at the end of “Big Bad Wolf,” combining their skills and attitudes to begin construction anew, there is the definite sense that all will not be around to see completion of the project. Finding out their fates is just another reason to watch a great show.