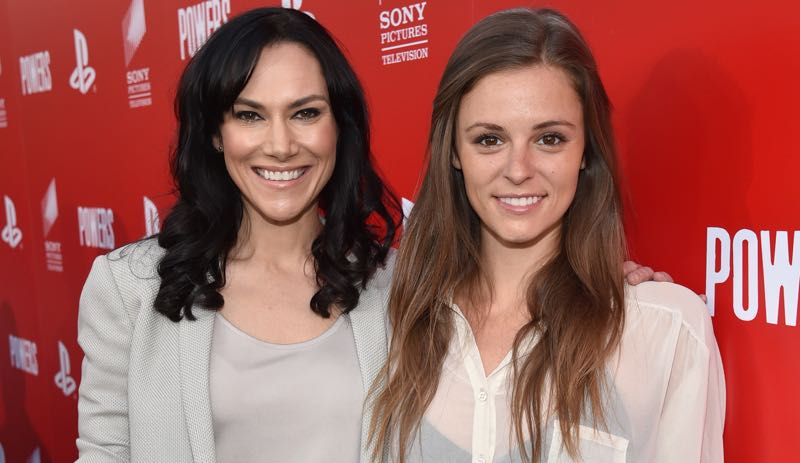 Over halfway through its second season, Syfy’s drama HELIX continues to stupefy and confound viewers with each new twist and turn.  It is simply unpredictable where the show could possibly go next.  As our jaws have dropped with each episode, the characters have taken incredibly journeys from a remote island where an incestuous cult flourished to a small cabin and mass graveyard on the same island 30 years in the future. It is enough to make viewers head spin, but imagine what the actors are thinking of it all.

Fortunately, we caught up with stars Jordan Hayes and Kyra Zagorsky on the red carpet for Sony PlayStation’s new series POWERS and they shared some of their thoughts this season and on what is upcoming on HELIX:

Jordan Hayes talked about Sarah’s “baby fever” and how the baby, once found, will be something freaky and never seen before.  She also revealed that Sarah’s Immortal status may be the furtherest from her mind, but Sarah’s ability to live forever may just mean that we shall Sarah’s story eventually lead to sometime in the future as well.

Kyra Zagorsky teased that Caleb will be back, but laughing said that he may need to get out more and improve his social skills.  She also revealed that Dr. Julia Walker will soon be reunited with Alan and Peter and the show will again explore that unusual triangle of relationships.  As to what the future holds for Julia, well, that is going to be the fun of watching what comes next on HELIX.

To find out if the battle for the human race and Earth itself remains in the hands of the Immortals or if our heroes will find a way to stop a global genocide, be sure to tune in for all new episodes of HELIX on Friday nights at 10 p.m. on Syfy.  Only one thing is certain:  it will be an extraordinary tale worth watching.