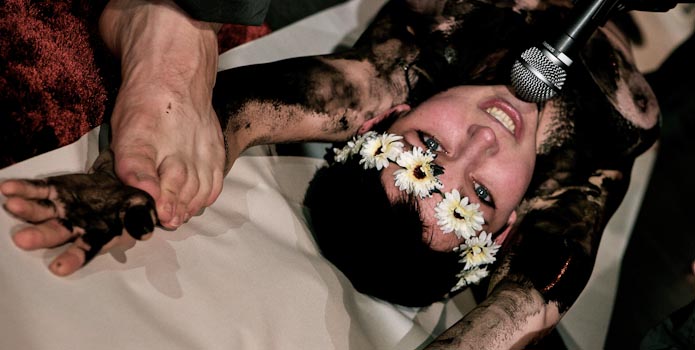 HBO Documentary Films has acquired the U.S. television rights to Madeleine Sackler’s feature documentary DANGEROUS ACTS STARRING THE UNSTABLE ELEMENTS OF BELARUS, it was announced today. The film will have its world premiere Sunday, Sept. 8 at the 2013 Toronto International Film Festival and debut on HBO in 2014.

DANGEROUS ACTS STARRING THE UNSTABLE ELEMENTS OF BELARUS highlights the powerful and innovative work of the award-winning Belarus Free Theatre (BFT) group. Founded in March 2005 by Natalia Kaliada, Vladimir Shcherban and acclaimed journalist Nicolai Khalezin – all of whom currently live in exile in London – BFT creates theater that challenges social and political issues in their home country of Belarus and the current regime of Alexander Lukashenko, often called the last dictatorship in Europe. An associate of the Young Vic Theatre in the UK, BFT has performed at venues around the world, including the Public Theater in the U.S., and has a wide range of international support from various individuals, including Sir Tom Stoppard and Jude Law, who are trustees of BFT.

Sixteen years after Lukashenko took power, the country’s citizens remain quietly choked by censorship and repression. Featuring smuggled footage and uncensored interviews, DANGEROUS ACTS STARRING THE UNSTABLE ELEMENTS OF BELARUS is an intimate look at a modern-day revolution, going behind the scenes as the artists create and perform their work, fighting for their art and safety.

“HBO is the perfect home for DANGEROUS ACTS,” says director-producer Sackler. “After working on this film in secret for the last three years because of the censorship in Belarus, we are very excited to be sharing it with audiences on HBO.”

DANGEROUS ACTS STARRING THE UNSTABLE ELEMENTS OF BELARUS is executive produced by Andrea Meditch (“Man on Wire”) and edited by Anne Barliant and Leigh Johnson. Josh Braun of Submarine negotiated the deal on behalf of the filmmakers.

For more on the show, visit facebook.com/HBODocs and twitter.com @HBODocs #Dangerous Acts.