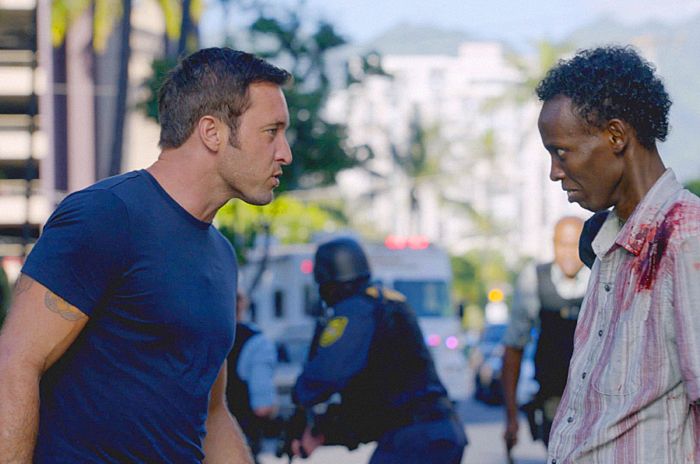 The team had more than just your standard scumbags to tackle in this episode. They had a guy who was a bonafide international war criminal and, boy howdy, was he scary.

Barkhad Abdi (Captain Phillips) was brilliantly terrifying as Roko, the man who killed people indiscriminately and forced children to be in the army in his country. Everyone thought he was dead, but he was living happy as a clam in Hawaii, thanks to a man who accepted blood diamonds in exchange for faking Roko’s death.

As is often the case when the person they are chasing is particularly despicable, the team took this case extra-serious, especially Steve. When Roko had trapped himself in an explosive-laden cab with an innocent family and shot the father, I wondered if there was going to be any chance of the team saving them. But though Steve was the one who marched in there like a badass, it was Kono’s deadly aim that got everyone out safe. She even kept Roko alive so he could stand trial for everything he had done. I call that a win on all counts.

Behind the story of the war criminal, there was a lot of romance in the air. Sparks were flying between Jerry and Mindy and I was so excited when she accepted his advances in the end. He may be a little quirky, but Jerry is a total love bug and I think any girl would be lucky to have him.

Another romance didn’t go over so well and that was Grace’s budding feelings for a boy. Because of a glitch with his phone service, poor papa Danny had to see all of their texts back and forth. Of course it made the overly protective dad upset to see his daughter growing up right before his eyes, but I think overall he took it very well. I mean he didn’t try to arrest the kid on some trumped-up charges, which I wouldn’t have put past him at all.

In the end, Danny learned he had to let go, and his patience paid off. Grace and Danny have always been close and she couldn’t even bear to keep a secret from him for one day. Their relationship reminds me a lot of the one I had with my own dad when I was a little girl and it makes me smile every time I see them together.

All in all, this episode had just the right mix of action and romance which made it the perfect episode before Valentine’s Day.

Danny: “She’s twelve. There should not be any romance in her air space. Period.”

Danny telling the problems of being the father of a teenage daughter to his phone provider.

Jerry: “People go through their lives rarely taking time to say ‘I love you,’ so what’s one day a year when you’re forced to be nice to each other?”

Jerry theorizing that famous brains could be out there somewhere waiting to be put in new bodies. Oh, boy.

Chin can agree with Steve’s theory about putting butter in coffee, but I’m so with Danny on this. Gross.

Hamilton deciding to take himself out before Five-0 could bring him in. Whoa.

Danny pointing out to Grover that “careful” wasn’t exactly in Steve’s vocabulary. Ain’t that an understatement?

Steve: “Monsters aren’t real. You are.”

Kono taking Roko down, but leaving him alive. Nice!

Danny seeing how happy Grace was and letting her be. Aw.

Heart burgers with heart cheese. I so want to do that next Valentine’s Day.

Chin: “There’s a wide spectrum of moments ranging from love at first to restraining order.”

Awww! I so knew that Jerry was going to give that rose back to Mindy. So sweet.

Danny and Grace both coming clean and then snuggling on the couch together. Too cute.

What did you think of this episode of Hawaii Five-0? What was your favorite part, the action or the romance?