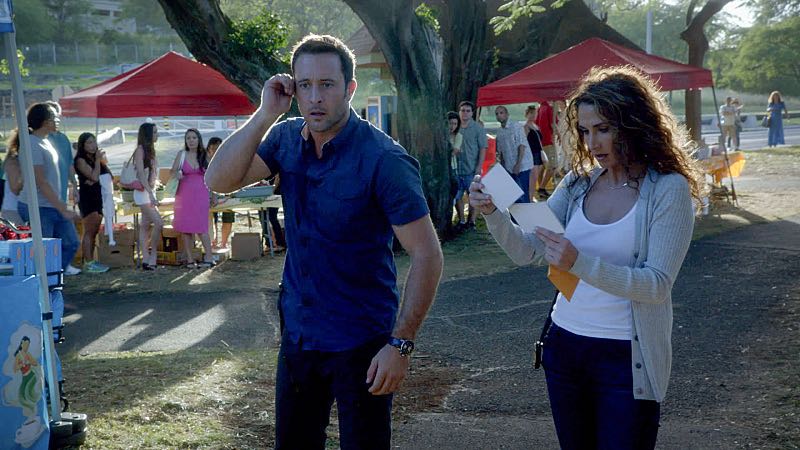 I had mixed feelings about this episode of Hawaii Five-0. As a diehard Danny fan, I of course wanted the entire episode to focus on his story with Amber’s murderous ex-husband. But I thought that the arsonist storyline was pretty good, too.

Half the fun of watching this series is seeing how they put new twists on familiar storylines. The arsonist the team was chasing didn’t just light fires and then go across the street to watch his work, oh no, he took it much farther than that. The guy actually stood in the room, in full fire gear, to watch his victims die right in front of him. That’s a sickness I’ve never seen before.

Steve and ATF Agent Kathy Millwood didn’t get off to the best start. Then again, I found it hilarious that Steve was basically told to get his ass out of his own crime scene. Luckily, the two found a way to work together and it was a good thing, too. When Steve found out how closely connected to the case Kathy was, he could have had her tossed out of the investigation. But he perhaps more than anyone understood her need to get the person that ruined her life and he let her stick around. That decision nearly got her killed, but once again Steve roared in and saved the day. I have to wonder if we’re going to see Duclair again since he stole the guard’s matches. Or was he just planning to set himself on fire like he always wanted?

As for Danny’s story, I had one very strong opinion about it during most of the episode, which was: Where the heck was Steve?? As soon as he knew Danny was in trouble, why didn’t Steve immediately start looking for him? I know the case was important, but there’s an entire police department that could have taken over. Sure, you could say the same thing about the search for Danny, but the difference was Danny was his friend. I just couldn’t wrap my head around that.

In the end though, I’m happy the story played out the way it did. Danny and Amber were completely on their own and they figured out how to handle her ex all by themselves. I had to admire Danny for being able to whup some ass after getting knocked unconscious and with a freaking knife wound in his gut. Just goes to show that Steve isn’t the only badass on the team.

As for Amber – or Melissa as we now know that’s her real name – she wasn’t too shabby herself. When they got into the car, I had a feeling her ex was going to pop back up like some character in a horror movie that doesn’t die no matter how many times you stab him. But I never once suspected that she was going to run the bastard over. I guess that’s one way to ensure that the guy would never come after her again. At least now she can truly start her life over.

Danny suggesting that maybe clothes would be optional for his and Amber’s romantic weekend.

Steve getting golfing tips from Michelle Wie, and the fact he had no idea who she was. Hilarious.

Steve: “No wonder you were drooling, huh?”

Steve and Kathy going head-to-head over the crime scene.

Danny snoozing in the hammock. That looked so comfortable.

Steve finding out the truth about Kathy. Whoa.

Kathy begging Steve not to take away the only thing giving her life purpose.

Danny kicking all kinds of ass, in shorts and with a knife wound. Holy crap!

Amber running over her ex. I felt like my jaw was going to drop to the floor when that happened.

Kathy: “I promise, you will get what you want someday. You will burn in Hell.”

Danny telling Amber, um Melissa, that they could start over. Aw.

Duclair ending up with that matchbook. Uh oh.

Michelle: “If these are your friends, I’d hate to meet your enemies.”

Grover actually calling Steve to give him crap.

Steve calling Grover back to give him some crap, too. Classic.

Hearing, rather than seeing, Steve’s ball go into the cup.

What did you think of this episode of Hawaii Five-0? Do you think the arsonist will be back?