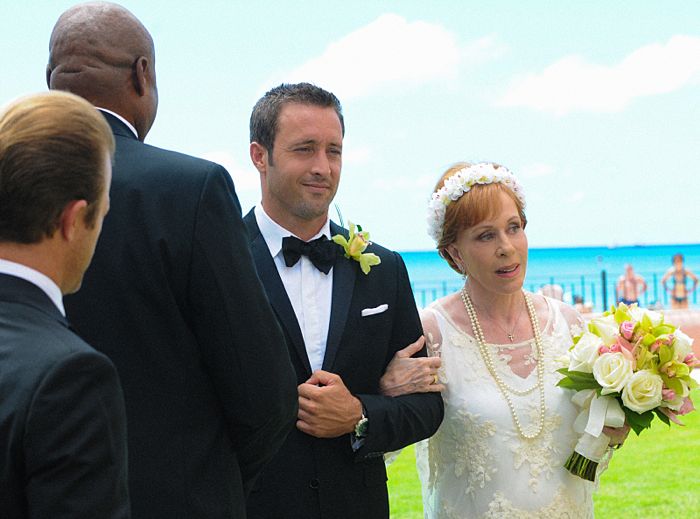 Steve’s Aunt Deb (played by the lovely Carol Burnett) came to the island for a visit and to make a very special announcement.

Of course Steve immediately got suspicious of Leonard when he found out how fast his aunt was marrying the guy and of course Jerry was able to dig up some dirt on him. I didn’t find any part of that story even remotely surprising. But rather than turn this episode into one of those stories where the kindly relative is swindled by some person just trying to get their money (or whatever else), there was much more to it than that.

Steve decided to confront Leonard like a man and discovered what really happened with the evidence that he supposedly tampered with all those years ago. I thought it was pretty clever of Leonard to take the box so that the evidence would disappear and he could, you know, stay alive. But it also allowed him to pull it out someday and use it if he needed to. So he gave it to Steve and put the burden on this soon-to-be nephew-in-law.

Then Steve had to struggle with the decision to do the right thing and ruin what little time Deb and Leonard had together, or break the law and keep it hidden himself. I think locking it up and “accidentally” forgetting it was the best option he had. I know it was technically against the law, but when you’re looking at two people who haven’t got long to live, how can you possibly deny them any moment of happiness?

That was almost the same theme that played out with the case in this episode. I suspected the lawyer was guilty from the first moment he appeared on screen, but I was wrong. I didn’t think for one second that the parents had planned to have themselves murdered so that their children could get the insurance money. It wasn’t until one of the boys mentioned how their parents had always been about the money that it sort of made sense.

The mother and father really thought their boys would be better off with them dead and lots of money to spend. It never occurred to them that they’d rather be poor and even have one parent in jail than rich without them. I also don’t think it occurred to them that their boys would turn down the insurance money. It was sad that they lost their parents, but I think those kids are going to be okay. They already have more guts and morals than their parents ever did.

Okay, I know I wasn’t the only one dancing on my couch when “Turn Down for What” came on.  Don’t even try to deny it.

Finding out how well Deb was doing after her trip.

Steve’s reaction to Deb announcing that she and Leonard were engaged.

Steve’s eyes practically bulging out of his head when he saw Leonard passing around all that cash.

Danny saying exactly what Leonard said when he passed out the money.

Danny saying he’d cracked the mystery of the soft hands and Steve calling him “Nancy Drew” in return.

Poor Danny. Not only does he never get to drive, but he’s always stuck as a passenger with people who drive like maniacs.

Goodman: “As your attorney, I strongly advise you not to participate.”
Danny: “I advise you to shut up.”

Deb asking Steve to walk her down the aisle. So sweet.

Goodman: “This action is in no way an admission of guilt on the part of my client.”
Danny: “You’re the reason I hate lawyers.”

Leonard telling Steve all he wanted to do with the little time he had left was to make Deb happy.

Steve and Danny staring at the box.

Steve jumping through the skylight. as you do.

The brothers trying to come to terms with why their parents thought they’d want money more than them.

Steve and Danny realizing the boys had too much integrity to take money that wasn’t rightfully theirs.

Danny’s socks. That is all.

Danny: “You know what you are? You’re like a big marshmallow filled with testosterone.” – That may be the best description of Steve I’ve ever heard.

Danny (and I) questioning that Rick had the authority to perform the ceremony.

Deb choosing to sing her vows. I kept it together until then, but that’s when I lost it.

What did you think of this episode of Hawaii Five-0? Did you cry during Deb and Leonard’s wedding?