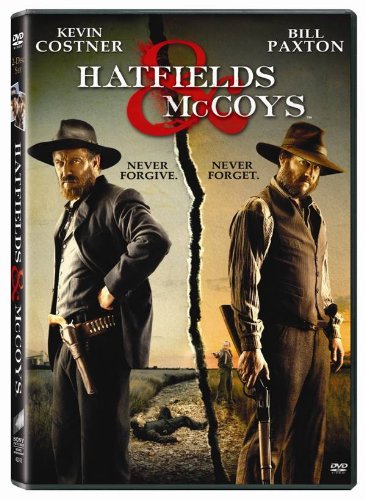 Seat42f and Sony Pictures Home Entertainment have teamed up to give THREE lucky winners a copy of HATFIELDS &amp; MCCOYS on DVD. For a chance to win leave a comment below telling us why you want to add HATFIELDS &amp; MCCOYS to your DVD collection. Only one entry per person. Contest ends August 7th. Winners will be notified on August 8th via email so make sure to use a valid email address when you post your comment.

The highly anticipated HATFIELDS &amp; McCOYS arrives on Blu-rayTM and DVD July 31st from Sony Pictures Home Entertainment (SPHE). Two-time Academy Award® winner Kevin Costner (Best Picture and Best Director, 1991, Dances With Wolves) stars as Anse ‘Devil’ Hatfield, and four-time Golden Globe® nominee Bill Paxton (TV’s “Big Love,” TV’s “A Bright Shining Lie”), stars as Randall McCoy in the epic, true tale of close friends turned enemies. The infamous back country feud that became an American legend begins with Anse Hatfield and Randall McCoy, close friends and comrades until near the end of the Civil War, when they return to their neighboring homes – Hatfield in West Virginia, McCoy just across the Tug River border in Kentucky – to increasing tensions, misunderstandings and resentments that soon explode into all-out warfare between the families. As hostilities grow, friends, neighbors and outside forces join the fight, bringing the two states to the brink of another Civil War.