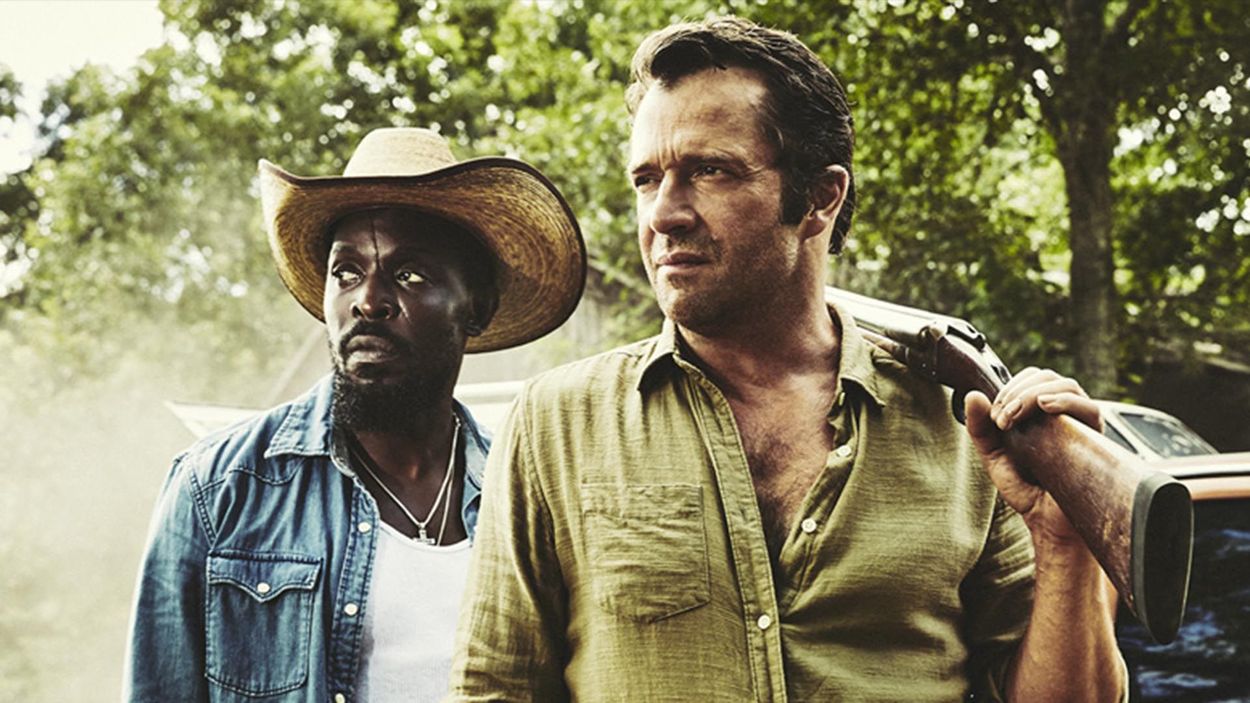 I’ve been missing FX’s Justified something fierce ever since it left the air, but Sundance has a new series that might just fill that void, for awhile anyway. Premiering last night, HAP AND LEONARD is the story of two men in Texas who get roped into a heist. Based on a story by Joe Lansdale (Cold in July), the titular characters inhabit a very specific world that is caring without being showy about it, and violent when it needs to be. It’s hella entertaining.

Leonard (Michael Kenneth Williams, The Wire) and Hap (James Purefoy, The Following) have been friends for a very long time. They work together in the rose fields, they exercise together through boxing, and they accept one another unconditionally as best friends, defending the best interests of the other when someone threatens to interfere with that. They are as close as two men can be.

But that’s not immediately obvious from the first scene. In the modern world, nerds and geeks and metrosexuals have become the new norm, and the macho type isn’t disappearing, exactly, but isn’t as taken for granted as it once was. Leonard and Hap are definitely macho, and their bromance doesn’t fit the current definition of the word, finding a way to display their feelings while not losing this identity.

As a happy nerd myself, I never aspired to be the type of man they are, but Raylan and Boyd on Justified, among others, taught me how cool that type of character could be. HAP AND LEONARD is and are cool in almost every sense of the word.

Yet, they are flawed, complex men, too. There’s a lot more going on with both than what is immediately apparent on the surface.

The story of HAP AND LEONARD begins when Trudy (Christina Hendricks, Mad Men), an ex of Hap’s that Leonard does not like, shows up and offers them a get-rich job. Since they are both out of work and could use the money, they accept, Leonard a heck of a lot more reluctantly than Hap. They’ll have six episodes to get the work done, and viewers will have to wait awhile to see if Trudy and her most recent guy, Howard (Bill Sage, Nurse Jackie), are trustworthy.

I can honestly say, I don’t care if they succeed. I think I could greatly enjoy the run with or without a pot of gold at the end. For me, it’s all about the chemistry between Purefoy and Williams, and that’s enough. I enjoy the dialogue and the interplay between them. I like seeing Leonard open up to Hap and be protective of him. I like seeing Hap return the favor with Leonard’s homophobic uncle (Henry G. Sanders, Dr. Quinn Medicine Woman).

The fact that Leonard is gay is pretty much an afterthought, not a driving plot point, reinforcing the themes mentioned above, and seems so where Hap is concerned, too. Williams has already proven he can buck the stereotype on The Wire, and he does it again here. It’s extremely important to have a variety of homosexual role models on television, and it’s nice HAP AND LEONARD chooses to give us someone as realistic and relatable as Leonard.

HAP AND LEONARD is a period piece that doesn’t feel like one. It’s set in the late 1980s, but aside from the guys not having cell phones, I couldn’t really tell. The setting is one in which you wouldn’t expect to see the latest gadgets or automobiles. It just feels like an authentic place that would resist changing with the times, and I appreciate that.

HAP AND LEONARD airs Wednesdays at 10/9c on Sundance.