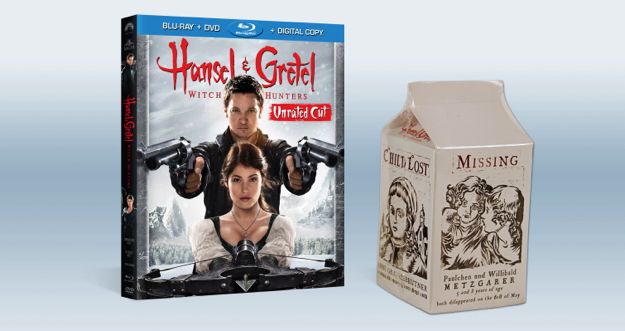 The fabled siblings are all grown up and hell-bent on tracking and killing witches wherever they hide in the no-holds-barred epic of modern action and adventure HANSEL & GRETEL: WITCH HUNTERS, taking flight on Blu-ray, Blu-ray 3D, DVD and On Demand June 11, 2013 from Paramount Home Media Distribution.  The film will also be available early for Digital Download on May 21st.  “Destined for cult status” (Rick Florino, ArtistDirect.com), HANSEL & GRETEL: WITCH HUNTERS is filled with “super crazy action and mind-blowing thrills” (Shawn Edwards, Fox-TV) and stars Jeremy Renner (The Avengers, The Bourne Legacy), Gemma Arterton (Quantum of Solace), Famke Janssen (X-Men), Thomas Mann (Beautiful Creatures) and Peter Stormare (The Big Lebowski).  Written and directed by Tommy Wirkola (Dead Snow), the film earned more than $200 million at the global box office and a sequel is in development.  The sly and ingeniously wicked movie tells the story of the brother and sister team seeking to avenge their parents’ deaths.  But after a lifetime of hunting witches, Hansel and Gretel now must face an evil greater than anything they’ve seen: a terrifying new threat so massive, it could destroy the world as we know it.