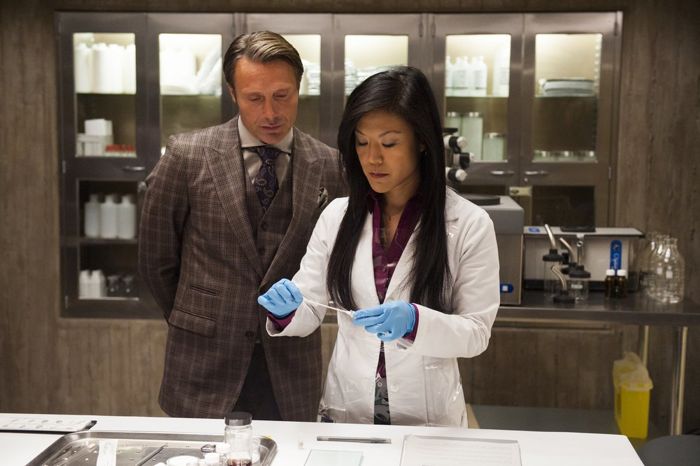 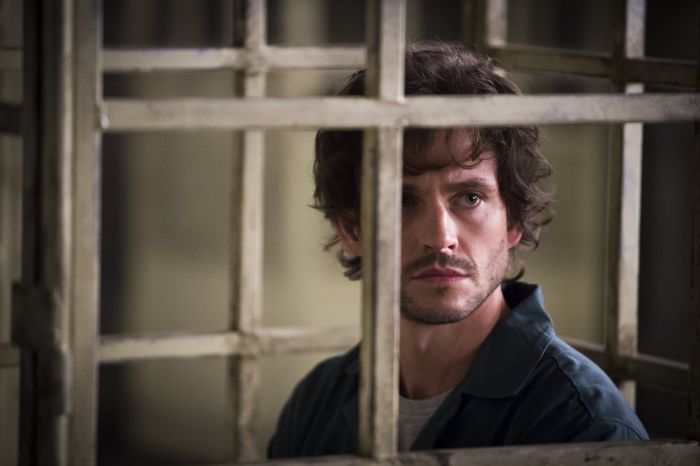 NBC’s HANNIBAL began its second season last night with “Kaiseki.” The word refers to a multi-course Japanese meal, as well as the skill it takes to prepare such a repast. This seems appropriate, as the hour gives us dish after dish of tasty, chewy drama, all; delivered with the beautifully artistry of a television master. It remains not only one of the best written and acted series on the air, but also one of the best visual and auditory productions overall.

Will Graham (Hugh Dancy) is right where we left him – sitting in a jail cell, about to be tried for the murder of several people, more concerned with exposing the truth about Hannibal Lecter (Mads Mikkelsen) than defending himself. To be fair, if Hannibal’s nature is brought to light, Will will get off scot free. But given the care and attention to detail Hannibal puts into covering his tracks and framing Will, that isn’t an easy task.

Jack Crawford (Laurence Fishburne) humors Will, having Beverly (Hettienne Park) swab Hannibal’s DNA and go over his clothing with a fine-toothed comb. But Hannibal is cooperative and seemingly open, making sure Jack never for a moment suspects Will’s accusations are more than the ravings of a mad man.

In fact, everyone seems convinced that Will is crazy. Beverly will consult with him, continuing to recognize his genius, but she’s wary. Dr. Alana Bloom (Caroline Dhavernas) is concerned for Will and shows it by visiting him, taking custody of his dogs, and looking for a plausible defense, but even she thinks he murdered. Her position is that he’s mentally ill and that’s what’s responsible for the horror, not Will himself, but she still doubts him, even though fans know that Will is innocent. Probably.

All of this would make for some really suspenseful drama, waiting for the other show to drop, if “Kaiseki” didn’t screw up the very first scene in the episode. When the premiere opens, Hannibal is slicing some meat and we catch Jack’s reflection in the knife. Then, the two engage in a fight to the death, both slashing and tumbling, before the screen flashes ‘Twelve Weeks Earlier.’ Don’t get me wrong, it’s a wonderful moment, as most of HANNIBAL is, but it’s poorly timed in the narrative arc.

Practically anyone who watches HANNIBAL is already at least vaguely familiar with The Silence of the Lambs and Hannibal films or books, which will (renewal gods willing) make up seasons five and six of this show. As such, we know Hannibal’s misdeeds will be exposed, and we also know that all five of the main characters will survive for quite some time, none being killed off before those seasons. However, this has never detracted from the enjoyment of the show because no one but Bryan Fuller, the brilliant mind behind it, can predict when those revelations will unfold.

“Kaiseki” spoils that. Assuming time in the story matches time in the real world, twelve weeks spells twelve episodes, taking us up to the season two finale. We now can see exactly how the confrontation will play out, and will be able to see it coming. A large part of the pacing is screwed up.

Now, it’s likely this is done for practical reasons. HANNINBAL is a low-rated show, and even with the international partners that help fund it, there’s no guarantee NBC will keep it going. An opener like that will hook those who might complain of slowness, and showing us the end at the start has become a common TV staple. The problem is, it’s now a detestable, predictable trope, and HANNIBAL is way better than that. As someone who doesn’t even watch previews at the end of episodes any more to avoid being spoiled, it really makes me angry they would do this. The only thing that would salvage it a little is if the twelve weeks unexpectedly pass by mid-season, or halfway through season three, rather than leading to the conclusion of this year.

The rest of “Kaiseki” is brilliant. I love the tension between Hannibal and Dr. Bedelia Du Maurier (Gillian Anderson) when he asks her to lie to Jack for him, though the extent of her falsehood is unclear, since how much she knows isn’t revealed. The scene in which Dr. Bloom files a complaint about Jack’s lack of judgment, which the CIA investigator (Cynthia Nixon, Alpha House, The Big C) just wants to make go away, is stellar. Hannibal ‘jokingly’ confessing to Will’s doctor, Frederick Chilton (Raul Esparza), is fun. The moment between Jack and Alana in Will’s house is touching. Finding out Hannibal still considers Will a friend is intriguing. Will’s visions are beautiful, and him recovering a memory is a triumph. Plus, there’s a really cool new killer obsessed with color palettes introduced, which Jack will investigate with the help of Hannibal, who has taken over Will’s job.

The characters are so well defined, and each have moving scenes with others. The cast is fragmented, to be sure, but most people get the chance to interact with most others one on one, pulling us into their dark, twisted world in the best of ways, the subtext as interesting as the dialogue.

I just wish “Kaiseki” hadn’t played to popular bends, and then it would have been perfect.