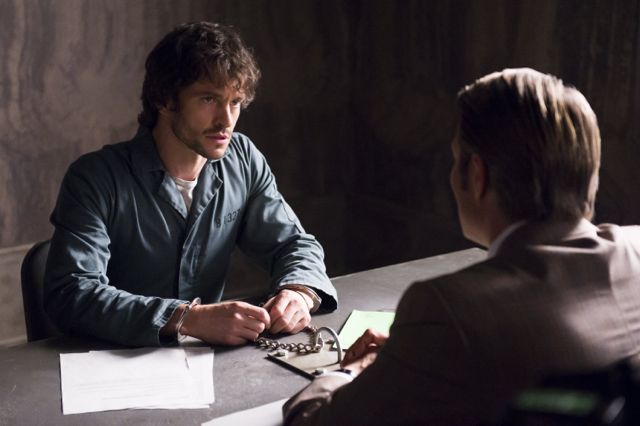 HANNIBAL Episode 2.3 Promo Hassun : WILL GRAHAM’S TRIAL BEGINS, BUT WHEN AN AVID FAN STARTS RECREATING CRIMES SIMILAR TO THOSE WILL IS ACCUSED OF COMMITTING, EVEN WILL’S STRONGEST DETRACTORS ARE FORCED TO RECONSIDER THE CASE AGAINST HIM AS CYNTHIA NIXON GUEST STARS – Will Graham’s (Hugh Dancy) trial begins and he must watch as those closest to him are forced to take sides. Jack Crawford (Laurence Fishburne, already in hot water from Alana Bloom’s (Caroline Dhavernas) scathing report about his conduct with Will, is pulled in conflicting directions. He acknowledges that he may be partially to blame for pushing his star pupil over the edge. To add confusion to an already suspenseful trial, a court bailiff is killed in a Copycat-like manner and those closest to Will start to wonder if they were wrong about him. The outcome of the entire trial hangs in the balance as one last key victim is served up.Also starring Hettienne Park, Aaron Abrams, Scott Thompson and Raúl Esparza.