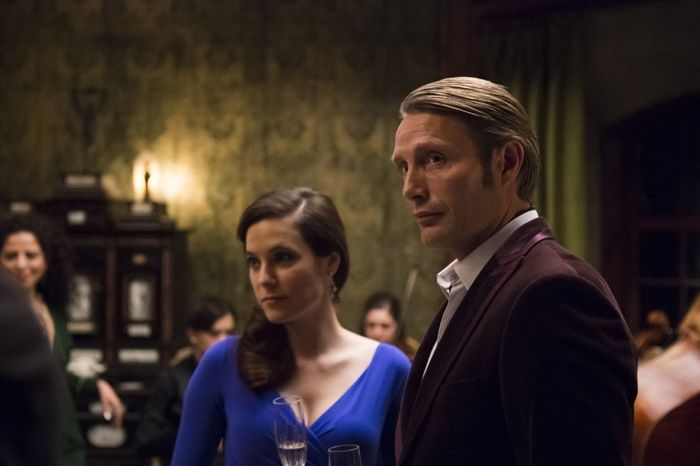 HANNIBAL Episode 2.06 Photos Futamono : SUSPICIONS RISE ABOUT HANNIBAL LECTER (MADS MIKKELSEN) WHEN HE THROWS A DINNER PARTY WHILE THE CHESAPEAKE RIPPER IS ON A KILLING SPREE AS EDDIE IZZARD GUEST STARS When a city councilman’s body is found in a parking lot, intertwined with a tree, the artistry and missing organs suggest the work of the Chesapeake Ripper. Jack (Laurence Fishburne) and the team race against time to catch the Ripper while he’s still on his killing spree. When Will (Hugh Dancy) suggests the possibility that the Ripper is filling his pantry with the victims’ organs, Jack crashes Hannibal Lecter’s (Mads Mikkelsen) dinner party to collect evidence and test the meat for human DNA. Jack’s growing suspicions drive Alana (Caroline Dhavernas) even closer to Hannibal, believing he is the victim of a witch hunt. Meanwhile, clues from the tree man help the BAU zero in on a location they believe the Ripper used. There they discover the most shocking revelation of Jack Crawford’s career—Miriam Lass alive. Also starring Aaron Abrams, Scott Thompson, Raúl Esparza and Anna Chlumsky.