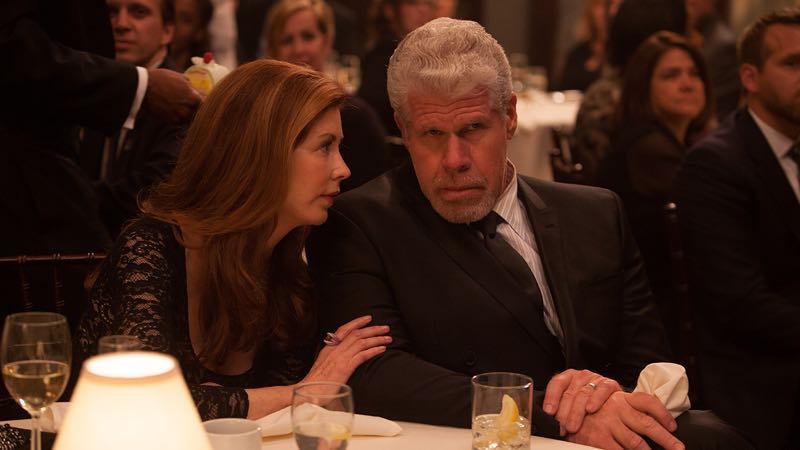 Amazon has released a new drama called HAND OF GOD, the first season of which is available to stream on Amazon’s website now, free for Prime members. It revolves around Judge Pernell Harris (Ron Perlman, Sons of Anarchy), who undergoes a traumatic experience. Pernell begins believing God is speaking to him, asking him to carry out vigilante justice. Is he right, or is he crazy?

HAND OF GOD sets up a relatively complex story. We have Pernell, of course, along with his wife, Crystal (Dana Delany, Body of Proof), who is at the end of her rope, too, but doesn’t speak to a higher power. The catalyst that has brought them to this point is the rape of their daughter-in-law, Jocelyn (Alona Tal, Burn Notice), and the attempted suicide of their son, PJ (Johnny Ferro, Children of God). The second occurs seven months after the first, but is likely related, given that he was forced to watch the assault of his wife.

That would be enough for any couple to endure, and the Harris family is suffering mightily. With PJ in a coma, it’s no wonder Pernell snaps. Or does he?

HAND OF GOD doesn’t tell us for sure if Pernell is insane or righteous, at least not in the pilot. On one hand, he seems to know things that only God could tell him. Or might he be processing clues he doesn’t consciously realize? Or is he a lucky guesser and his luck will run out? The show keeps us guessing, too, taking us from one event to the next in rapid fire.

Besides the central family, there are a number of other people involved in the chaos, wittingly or not. Reverend Paul Curtis (Julian Morris, Pretty Little Liars), formerly a soap opera star, baptizes Pernell, and may be taking advantage of the judge alongside his morally-challenged partner, Alicia Hopkins (Elizabeth McLaughlin, Betrayal). KD (Garret Dillahunt, Raising Hope) is a violent criminal whom the judge decides to free and use for his own purpose. Mayor Robert Boston (Andre Royo, The Wire) is Pernell’s friend and business partner, confused and concerned about the changes Pernell is going through.

Now, how much each of these people know and how pure their motives are is anyone’s guess. None seem innocent, and a couple may be downright evil. But the writers prefer to keep a twisty, dark story going than lay things out for us, so it may take some time before intentions are truly revealed.

I like HAND OF GOD mainly because of the cast. It’s an excellent group, especially Dillahunt and Perlman, and even if the circumstances aren’t great for their characters, alienating the audience with hideous behavior, the performances are worth watching and admiring.

The story, I’m less into. Perhaps because it’s so hard to figure out what’s going on, combined with mainly unlikeable players in the drama, it doesn’t draw one in as other programs do. It’s hard to care if the man that raped Jocelyn will get justice because it doesn’t feel like that will fix anything for the family, not even a little bit. And the religious angle is played pretty cynically. I’m not religious myself, but I’d like to see doubt sewn into the story that god might actually be involved. Considering what happens, Satan may be a better suspect.

Still, it’s quality stuff, well-made, well-acted, and lacking any glaring flaws or plot holes. I think it’s likely worth giving it a few more hours in order to figure out if the show is for me or not. It’s certainly for someone, and not a program I would dismiss for inferior quality, which gives it a leg up on most fare, especially on the broadcast networks. This is better than that stuff, even if it fails to be as compelling as, say, House of Cards or The Walking Dead, in my opinion.