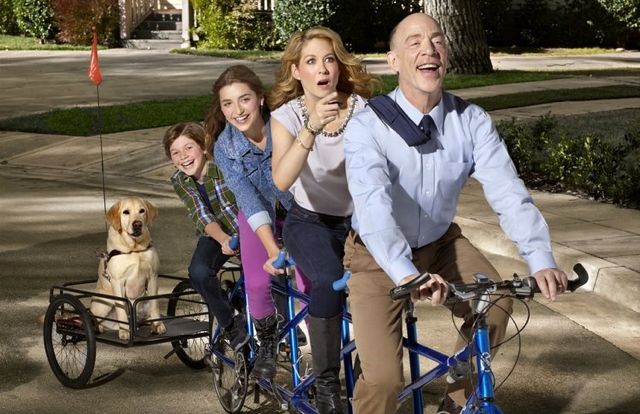 Sunday night, after the Olympics, NBC will be previewing its new sitcom GROWING UP FISHER, which will regularly air on Tuesday nights. It’s the (based-on-a-true) story of Henry Fisher (Eli Baker) and the changes his family goes through when his parents divorce. They don’t have a good marriage, but living separately brings them closer together than ever, as both parents are dedicated to their children.

GROWING UP FISHER reminds me a lot of The Goldbergs. Both tell the tale of an actual family and have voice-over narration, with FISHER’s provided by Jason Bateman (Arrested Development). But FISHER is set in the modern era, adapting the details of the episode to today, rather than recreating an older period, as The Goldbergs do. Still, they both share the same sweet emotional bonds and feeling of authenticity, remixed for laughs.

The Fisher parents are played by Jenna Elfman (1600 Penn, Dharma & Greg) and J.K. Simmons (The Closer, Spiderman), two wonderful comedic actors. Both have been in failed sitcoms lately; it’s about time they get something that works. GROWING UP FISHER has the potential to be that vehicle, even though it’s not that original, because the charm and the love oozing from it are very enticing.

Elfman plays Joyce, a woman who lost out on her young, carefree days by getting pregnant with daughter Katie (Ava Deluca-Verley) on her second date with Mel (Simmons). Joyce is now suffering a mid-life crisis, and so wants to recapture those glory days, buying the same pants that her daughter has, and generally acting immature. It’s this behavior that instigates the divorce, or so it seems, as the series avoids placing blame on anyone, presumably to protect the real people that inspired the show.

The one glaring problem with GROWING UP FISHER stems from Joyce’s arc, though. Elfman is in her 40s, meaning she’s a bit too old to be playing someone who got pregnant too young and whose daughter is now only sixteen. Even if one sets that aside and decides to see Elfman as ten years younger than she is, there’s still the ick factor when one considers Simmons is fifteen years her senior, meaning he would have to have been a creepy old guy preying on a teenager. So this math simply does not work. But I’m willing to ignore that because I really like the performers, and they do do a great job building these parts.

Mel is immature, too, but in a different way. Completely blind since age twelve, Mel fakes his way through the world of people with vision. For years, he manages to trick many into thinking he can see, often with the help of his son, Henry, and he doesn’t let his disability stop him from doing anything, including cutting down trees and parallel parking. He’s inspiring, but also down to earth enough to let his flaws show, making him likeable, not ridiculous.

Some might say that Mel is not a realistic character because of the things he does. It’s true, the outrageous acts he commits make him seem like a cartoon. However, sometimes the least believable story is the most likely to have occurred, and even if the part if exaggerated, Simmons definitely communicates effectively the spirit of the man he is portraying.

Much of the first episode’s story stems from Henry feeling replaced when Mel gets a seeing-eye dog named Elvis. Mel couldn’t have Elvis before because Joyce is allergic to dogs, but now, the dog is guiding Mel in the way that Henry used to. It makes sense for Mel to get Elvis, since Henry won’t be around his dad full-time any more, but it also causes friction, which Mel finds a really neat way to solve, totally in keeping with his character.

I don’t know how many more installments can be built off of this established premise, but family sitcoms seem to have a way of working over time, and given the development that these characters are begging for from the start, GROWING UP FISHER has plenty of room to grow. The writing is witty and the players are entertaining. The end of the premiere even brought a few tears to my eyes. What more can you ask for in a family sitcom?