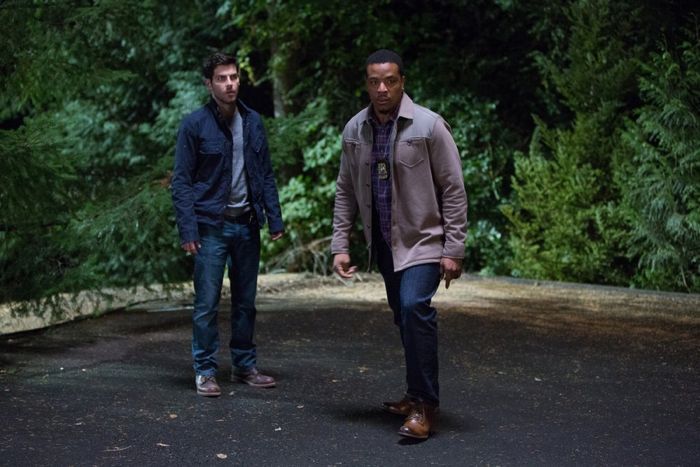 This week’s GRIMM on NBC is called “Cry Luison.” Luison is a variation of the werewolf mythology, used primary in Paraguay and other Guarani-speaking cultures. Which means, roughly, there is a South American werewolf on the loose, terrorizing people. To be more accurate, there are multiple werewolves, and they’re only terrorizing one woman, whom no one believes when she mentions said wolves. But you get the point.

Once more, a large chunk of GRIMM is given over to a formulaic plot. Nick (David Giuntoli) and Hank (Russell Hornsby) investigate the woman’s case in a story that really has nothing to do with the larger mythology, save for letting views know that Blutbads aren’t the only wolf-type Wesen out there. It’s very standard fare, Nick still not having his Grimm powers, and Monroe (Silas Weir Mitchell) just helping out a bit, as is often the case.

I wish GRIMM would stop doing this. There are subplots in “Cry Luison,” which I’ll get to in a minute, that are very good. But GRIMM is a genre show and should start acting like it. Forcing crime procedural stories into this structure is unnecessary and annoying. Perhaps it seems worse this fall after a long-arcing tale last spring that abandoned the standard format. But I’d hoped GRIMM had moved beyond that and am very disappointed that it hasn’t.

Now, while Nick, Monroe, and Hank are off on this, there are a number of other, much more interesting, stories playing out. Juliette (Bitsie Tulloch) has to decide if she wants to temporarily look like Adalind (Claire Coffee) and have sex with Nick so he can be a Grimm again. Adalind is trying to escape a prison that messes with her mind. Trubel (Jacqueline Toboni) secretly protects Nick when Bud (Danny Bruno) blabs about Nick losing his Grimm powers. Renard (Sasha Roiz) speaks to his mom (Louise Lombard) about his daughter. All of these could be expanded and made to fill up an episode, and probably should be.

Juliette’s decision is a hard one. Nick doesn’t want to tell her he misses being a Grimm, but surely she knows him well enough to figure that out. Plus, she overhears the trouble Bud causes, so she’ll see the wisdom in in helping Nick get back to fighting form. But she would like a chance at a normal life, which Nick does want to give her. And she’d have to look like Adalind while having sex with Nick, which brings up oh so many bad emotions, especially jealousy and anger. What will she do?

I think it’s almost certain that Juliette will go through with this. She has to, to keep the premise of the series going. Plus, Nick’s calling is noble, so she would be petty to stand in the way of it. She has her own heroic part to play by sacrificing the life she thinks she wants for Nick. Besides, she has Wesen friends now, too, so surely she doesn’t want to leave them behind, as detestable as the act will be to undo the spell.

Nick’s talk about moving away and giving up the Wesen-hunting calling in “Cry Luison” is only talk. Were he to follow through, there would be no show. However, he really should mention to Monroe how hard it will be to leave friends behind. I feel bad for Monroe when Nick is going on about this choice without bringing up the strong bond they share.

I’ve missed having Bud around, who has been seen sparsely in the past season or so. “Cry Luison” doesn’t make it easy to miss him, though. I know he’s a little talkative and that’s always been a weakness of his. But he has to know that blabbing the particular secret that he does is a huge mistake. Bud feeling bad isn’t enough punishment. GRIMM should take this element and run with it, giving Bud a good story to enact change and growth for himself. They probably won’t, though.

Adalind’s prison experience is cool enough that it doesn’t completely seem like filler, though that’s primarily what it is. Last week’s near-death disaster turns out to be a hallucination, and it isn’t the last one she has. If her going through this ordeal doesn’t convince Viktor (Alexis Denisof) she’s telling the truth, I don’t know what will. I’m actually feeling sorry for her, even when she disobeys the Key, because motherly instinct would be hard to shut out and she doesn’t have a reason to trust him, anyway.

Once more, Wu’s (Reggie Lee) involvement in the supernatural world is kicked down the road. Renard mentions to Nick that Wu’s investigation into Trubel must be stopped, but “Cry Luison” doesn’t go any further than that. Is Wu really content to let things simmer this long? Come on already!

“Cry Luison” has good elements, but isn’t a great episode overall. After some excellent runs, it’s sad to see GRIMM decline in quality this year. I hope the change is temporary.