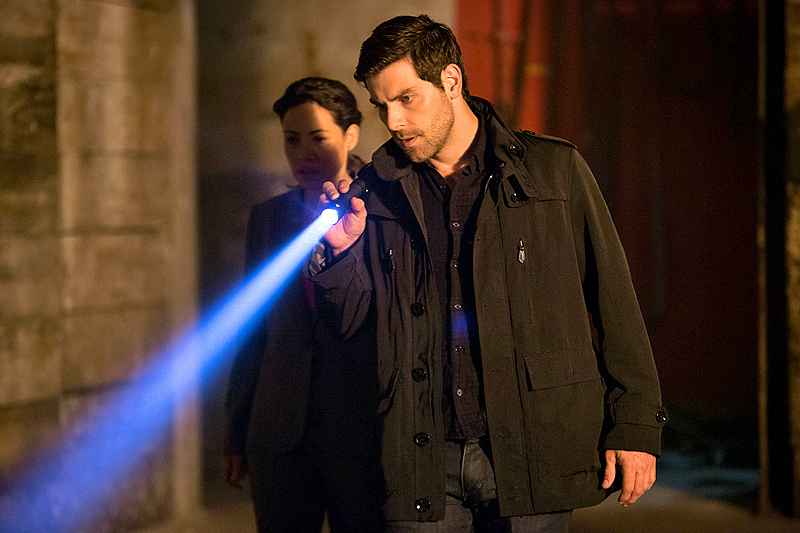 NBC’s GRIMM begins its fifth season this week with “The Grimm Identity.” In it, Nick (David Giuntoli), reeling from the immediate events of last year’s finale, decides to go after Agent Chavez (Elizabeth Rodriguez). With no evidence of Juliette’s (Bitsie Tulloch) death to go by, though, nor anything else Nick accuses Chavez of, Nick’s friends become concerned about his erratic behavior and intention to assault a federal agent. Is Nick going crazy, or is Chavez part of a secret organization with the resources to cover such things up?

“The Grimm Identity” begins with a lot of glimpses of scenes, Nick attending Juliette’s funeral and such. I very much do not understand what is accomplished by this. Obviously, within just a few minutes, it becomes clear that these things aren’t real. Nick is hallucinating and this is what he sees? I know the brain is funny and works in mysterious ways, but I just don’t understand why these particular scenes are chosen.

After that, the hour gets a little better, but only a little. It’s not a case-of-the-week, thank goodness, but a story about Nick’s possible mental stability. Conspiracies and missing bodies and claiming unlikely things are meant to keep viewers guessing whether Nick is truly right or not. Since he sees things in the opening that aren’t real, those glimpses mentioned above, maybe he isn’t right about Juliette and Chavez, either?

Except, I think GRIMM makes it pretty clear early on whether Nick is losing his mind or not. The glimpses aren’t done in the same style as the actual events of “The Grimm Identity,” so it’s pretty easy to draw a conclusion about this and be confident about it. Not that viewers need to mistrust Nick to enjoy the episode; he’s the hero of the piece, so of course we rally behind him. The show could have made us doubt his account, but it doesn’t, and that’s a valid choice to make.

Why, though, do the other characters not believe Nick? I get that he’s behaving a bit unlike himself, but they’ve all known Nick long enough to trust his word, body or no. The fact that others in his group aren’t sure they believe what he’s saying, including thinking Chavez might not be a Wesen, is strange. Presenting “The Grimm Identity” as a mystery is a mistake precisely because there is no mystery, nor should any character believe that there is.

The plot involving Chavez, who kidnaps Trubel (Jacqueline Toboni) and steals Juliette’s body (is she really dead?), is far more interesting. A shady government agency is often used in shows of this genre, but that’s because it’s a good idea, not a bad one, at least when done correctly (I love Buffy the Vampire Slayer, but The Initiative was a misstep). To bring another faction in now feels a little late, but as long as we learn Chavez and her people have been watching Nick longer than Nick knows, that would be fine.

I just don’t know if this is a sign GRIMM will turn things around, though. Last year is dreadful, with the series constantly artificially pushing their arcs into small moments of each installment, and instead concentrating on whatever beast Nick had to fight that week. That’s not what the program does when it’s at its best. There are some intriguing strands of “The Grimm Initiative” that are better storytelling than this, but the way so much of the hour doesn’t make sense, as mentioned above, makes me worry GRIMM won’t find a strong path forward, or was only even going back to a serial narrative half-heartedly. I guess we’ll find out soon enough if the show will fix itself or continue to devolve.