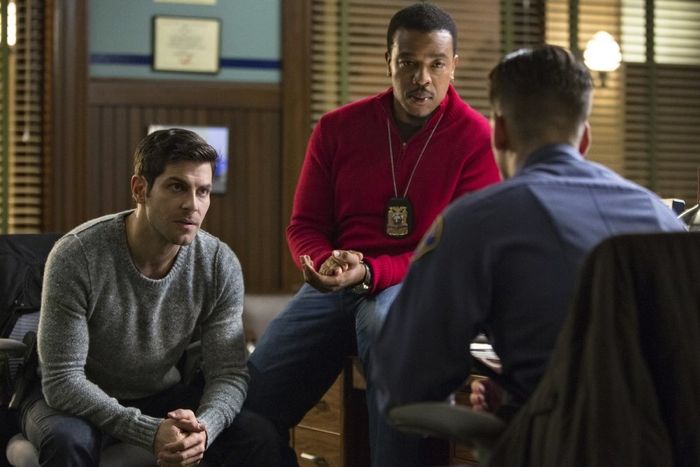 When NBC’s GRIMM took its holiday hiatus, there were a few pretty important cliffhangers left dangling. This week’s return, “Wesenrein,” picks up right where the previous installment left off. Wu (Reggie Lee) is finally getting the truth because it is the only way to save his sanity. Juliette (Bitsie Tulloch) is shocked to find she’s now a Hexenbiest. But both of those things take a backseat because Monroe (Silas Weir Mitchell) has been kidnapped by the titular Wesenrein, a Nazi-like hate group, who intend to punish him for his “sins,” such as marrying a different Wesen species than himself and befriending the enemy of almost all Wesen, a Grimm.

I like “Wesenrein” but I don’t love it, and here’s why. Wu being let in on the Wesen secrets has been stretched out far too long, and then is glossed over too quickly. Having the revelations halted because of an emergency is an understandable plot device. Yet, from Wu’s perspective, as he is not friends with Monroe and doesn’t know about the situation, he should be pushing back more, not least of which because police procedure is being ignored and he’s a good cop. Nick (David Giuntoli) and Hank (Russell Hornsby) tell him they’ll explain more later, but he has no reason to believe them, given how they frequently brush him off. He deserves better and should be demanding it.

There are many interesting ways GRIMM could go now that Wu is brought onto the team. He brings a fresh viewpoint, and the series should be using him to remind us of the wonder of the world that hooked many a fan in the first place. What I fear is that his part won’t expand, and he’ll still just be used as a tool by the main characters, such as when he is sent to guard a person of interest this week. Wu has been wasted enough; it’s time to give him something worthwhile.

I’m less upset about Juliette’s story being placed on the backburner. Monroe is her friend, so of course she’s concerned and wants to be there for Monroe’s distraught wife, Rosalee (Bree Turner). She has something that is deeply upsetting her, but she’s willing to be there for those that need her first because her issue really isn’t quite as important. I assume the show will deal with this next week, which would be fine, as long as they don’t string it out like they have a few other arcs.

I never for a second believed Rosalee was dead because it didn’t make sense for the story, though that was a cool dream sequence. It’s disappointing that it doesn’t even come close to authentic deception, though. Other shows have managed to be unpredictable, and having Juliette accidentally kill Rosalee would have been an earth-shattering event. As much as I’d hate to lose Rosalee, and I think it would mean losing Juliette, too, because she could never come back from that, it would have been really satisfying to see GRIMM take such a big risk. Sadly, it’s this unwillingness to ever do something so shocking that holds GRIMM back from its potential and makes it distinctly inferior to peers such as Buffy the Vampire Slayer.

The meat of the episode, though, is Monroe being a captive of a truly horrific people. It’s impossible to ignore the similarities between this group and Nazi Germany, both in attitude and symbolic style. I feel like GRIMM makes these people too cartoonishly evil, but the terror Monroe feels, and that the viewers feel for him, is authentic and raw. Though I wish for a less straight-forward set up, the stakes are real and tension is built excellently.

Monroe will survive this, of course, but I’m hoping there’s lasting damage. Again, I don’t expect it because the writers almost always play it too safe, but in an event such as this, Monroe should wind up mutilated, emotionally if not physically. There’re few situations worse he could be in. Until Nick can locate and slay the baddies, Monroe doesn’t know he’s going to make it out. I feel that from Mitchell this week, which is why I like “Wesenrein,” despite its flaws.