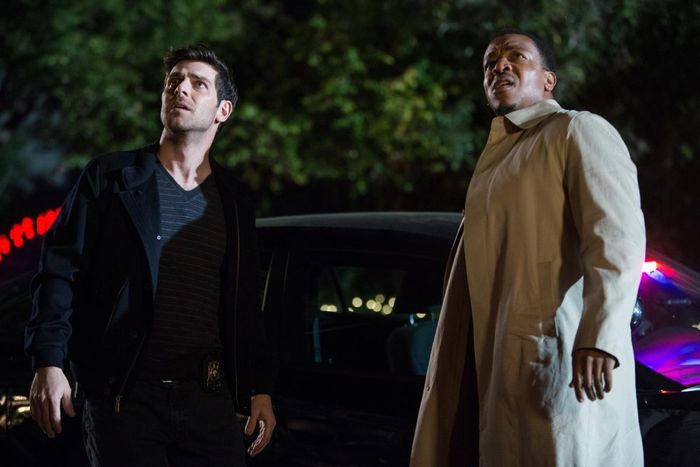 This week’s holiday-themed GRIMM on NBC, “The Grimm Who Stole Christmas,” which is weirdly not the last episode the series will air before December 25th, finds some evil elves destroying decorations. They aren’t actually elves, though. They are Kallikantzaroi, a Greek Wesen that experience twelve nights of hairy puberty somehow linked to this time of year. Get past that strange conceit without explanation, and the hour is better than many this fall, starting to get the show back on track.

GRIMM is best when it’s serial, even if there are strong procedural elements to the show. Recently, many episodes have relied too heavily on the monster-of-the-week format, without enough movement in the character arcs. “The Grimm Who Stole Christmas” strikes a bit better balance, still involving a creature, but also letting several in the ensemble progress a bit.

Nick (David Giuntoli) is back to being a Grimm, a welcome development since his loss of power slowed down the narrative quite a bit. This means Monroe (Silas Weir Mitchell) and Rosalee (Bree Turner) finally feel comfortable leaving town on their honeymoon, which they will be taking next week, not this one. Bud (Danny Bruno) gives the team important clues as to who is terrorizing the happy couple. Juliette (Bitsie Tulloch) may just be pregnant, which might have happened while she looked like Adalind, meaning the baby could be strange. None of these are major plots; well the last one sort of is but not yet featured majorly. Combined, though, they start to give the series the development it needs to move the characters along.

More notably, Josh (Lucas Near-Verbrugghe) decides he wants to go home and Trubel (Jacqueline Toboni) chooses to accompany him. This comes a little out of nowhere, since Josh seems quite satisfied to be there and learn about his dad, and maybe even wants to be a Grimm, too. Trubel, though, is ready for a mission she can undertake without Nick looking over her shoulder. Now that he’s back to normal, it makes sense for her to want to go off on her own, doing something that matters, not just serving as back up from him. Josh provides a convenient way to do so, and given how they leave, it’s likely their story will re-connect with the main one later this season, so no fan should be too disappointed.

This leads to a very touching scene between Nick and Trubel, which is a long time coming, but can really only occur under these circumstances. Personally, I don’t much care for her character, though I like the idea of her. But it’s nearly impossible not to be moved by her teary-eyed farewell, and Nick clearly is. He has done something very important in helping her. Might this be a way to move Nick’s character forward, offering similar assistance to others like Trubel?

Wu’s (Reggie Lee) investigation is brought back up, though it’s still moving frustratingly slow. Next week’s preview indicates this will finally get some focus, and it is long overdue. Renard (Sasha Roiz) tells Nick that whatever Nick tells Wu, Nick shouldn’t tell Wu about Renard, which is slightly puzzling. So Renard is OK with Wu knowing about Wesen, but not about his own captain? Why? Does Renard have some reason not to trust Wu? This dialogue puzzles and intrigues me.

While “The Grimm Who Stole Christmas” does spend at least two-thirds of its running time on the Kallikantzaroi, that story is fun and seasonably appropriate. Add to that a number of wonderful scenes that highlight the cast, which remain a definite draw for the show, and the episode ends up being pretty good. It’s not a perfect installment, but it’s an improvement over what GRIMM has been delivering lately. I appreciate that.

GRIMM next airs this coming Friday at 9 p.m. ET on NBC.