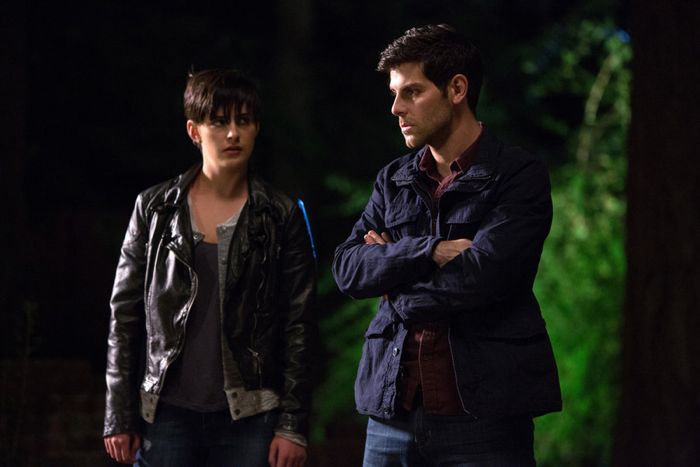 Unfortunately, this week’s installment of NBC’s GRIMM, “Dyin’ on a Prayer,” was another case-of-the-week snooze fest. A Gollum attacks an abusive husband. Nick (David Giuntoli) and Hank (Russell Hornsby) have to investigate, bringing in Trubel (Jacqueline Toboni) when they think a Wesen might be involved, since Nick is still without his Grimm powers. The fact that, while certain people involved in the case are Wesen, the murderer itself is not, makes it even more like every other crime procedural on television.

GRIMM airs Friday nights at NBC. If there were ever a night and time to break the standard formula and do something interesting instead on broadcast television, it’s that one. Add to that, GRIMM has already done several good arcs in the past that depart from the common structure, with a heavy supernatural mythology. Why, early in its fourth season, would it revert to a weaker story makeup? If viewers want a run-of-the-mill police story, they have a plethora of other choices. GRIMM should stick with what makes it special, not try to be like everyone else.

I do like the Rabbi (David Julian Hirsh, Weeds) who calls forth the Gollum to protect his nephew, David (Jakob Salvati, Red Widow). There is massive opportunity for character development here, a man who abhors violence, but accidentally sets it loose, not understanding what he is doing. The Rabbi is very clearly a good man, and is plenty willing to pay for the consequences of his actions. Unfortunately, “Dyin’ on a Prayer” spends very little time exploring that element.

There are subplots that entice this week. Adalind (Claire Coffee) continues her escape from the castle, only to be stymied by a weeping wall which threatens to drown her. Her fate is not shown. Again, this is another cool concept that is actually visually pretty impressive. There are real stakes in these scenes. But they are brief, barely a few minutes of the hour, and underdeveloped.

“Dyin’ on a Prayer” teases us with a story involving Monroe (Silas Weir Mitchell) and Rosalee (Bree Turner) dealing with haters, who don’t believe Wesen should marry a different breed of Wesen. This hate-crime thing is probably a little dated, but when a brick is thrown through the shop window, I sit up and take notice. Unfortunately, that one moment is all GRIMM does with this, not making any effort to show us how the characters deal with the attack.

A third storyline in which Elizabeth Lascelles (Louise Lombard) figures out what Adalind did to Nick is cool. She is an intriguing character, and has some great lines. I don’t know how long she’ll stick around, but she is a welcome addition to the recurring cast. However, in spite of providing a nice capper to the episode, she is also barely used.

A fourth (yes, fourth!) possibility for greatness emerges when Wu (Reggie Lee) brings his suspicions about Trubel to Captain Renard (Sasha Roiz). Renard knows who Trubel is, of course, and must protect her, so doesn’t give anything away to Wu. It is past time Wu is brought into the secret loop, though, and the more he pushes, the more likely that is to happen.

So, in summary, GRIMM gives us four excellent threads (five if you count the Rabbi, which is arguable) in “Dyin’ on a Prayer,” and still chooses to make the vast majority of the episode revolve around the one storyline that is boring and trite. The ingredients for a truly excellent series are present, and the writers tease us with them without delivering on any. How frustrating is it when a show that has been so good in the past stubbornly refuses to maintain that quality on a consistent basis? I can’t wait to get past these crap episodes at the start of the year and to this season’s real plots, which are surely coming, but not nearly quickly enough.