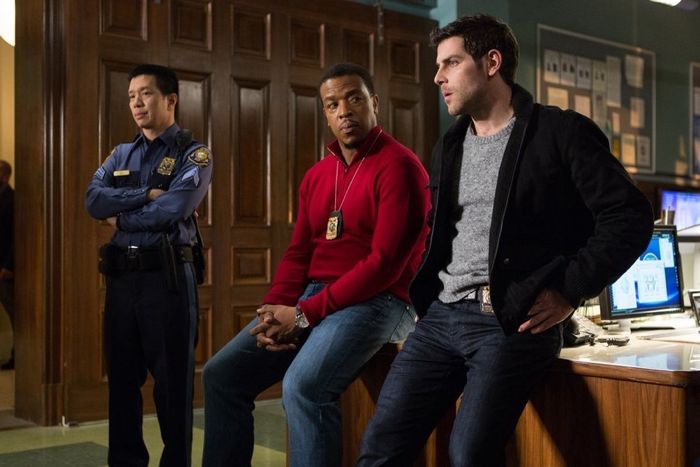 “Tribunal” is the episode of NBC’s GRIMM I’ve been waiting for all through this lackluster fall run. It’s a full-on mythology hour, no case-of-the-week, as everyone scrambles to find Monroe (Silas Weir Mitchell) before the racist Wesenrein can execute him. Thankfully, the ancient group is all about ritual, so our heroes have a bit of time, though, as always happens on television shows, Monroe is not located until the last possible second.

That last sentence may sound a little snarky, but it’s true! Just once, I’d like to see someone rescued with plenty of time to spare, though I guess waiting until everything is down to the wire creates more tension. And since quite literally everyone else does it, I can’t blame Grimm for the same.

As “Tribunal” begins, there are many leads being pursued towards Monroe, but none solid enough to act upon. Later in the episode, the entire group comes together and gets to use their various strengths. Even Bud (Danny Bruno), while not under direct protection, finds a backbone and stands up for his friends! It’s more of an ensemble effort than most adventures, and as I’ve said in the past, this is definitely the path towards making GRIMM a must-watch series. There must be a variety of personalities, each contributing, and each being interesting on their own.

It’s extremely impressive when Nick (David Giuntoli), Hank (Russell Hornsby), Renard (Sasha Roiz), Wu (Reggie Lee), Juliette (Bitsie Tulloch), and Rosalee (Bree Turner) all march into battle together. Badges cast aside, this is a group united by a far more important mission than just upholding the law. What’s more, everyone can contribute; none are dead weight or weaklings that must be protected. When the fight breaks out at the court, Nick is able to stay with the larger group of captured foes while the others give chase on their own through the woods. That’s progress in the structure of the show, and a welcome development.

I don’t know why everyone is OK with Juliette participating, though. Obviously, her now being a Hexenbiest gives her the strength to hold her own, which we get to see in spectacular fashion in “Tribunal.” Except, no one knows she is one yet. Why doesn’t Nick try to convince her to stay behind, or at least ask her to stand by his side instead of chasing the fleeing suspects. Sure, that’s been done before, but it’s not unreasonable for Nick to be a little more cautious with her until he learns about her power.

Speaking of, briefly, NBC presents an absolutely awful preview for next week’s episode, making it seem like Nick would kill Juliette just because she’s a Hexenbiest. That may be the stated job of a Grimm, but when has Nick ever followed that? It’s just stupid, no fan of the show will be fooled, and the network should be ashamed for putting out such a blatantly misleading ad.

The newest member of the Grimm band is Wu, who, after a little training with Bud, goes along on the big takedown. I do think Wu is acting like too much a part of the group too quick, with no one going out of their way to make him feel emotionally included, even after the danger is past and someone should be reaching out. But I’d rather see that than for Wu to remain an outsider, so when he raises a champagne toast and acts too familiar with Monroe and Rosalee, I’m able to forgive it.

At the end, Hank and Nick providing armed escort for Monroe and Rosalee is a humorous touch that makes the episode work. The heavy stuff is past, and now we need to smile a little. It’s a good pivot at the conclusion, and brings the overall-wonderful episode around to a satisfying closure.