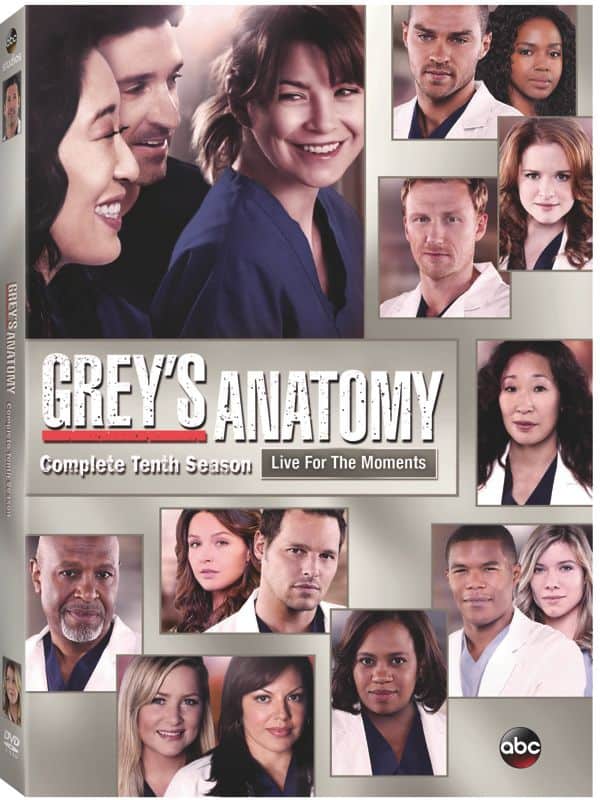 Synopsis: The storm may have passed, but now the relationships and romance of Grey-Sloan Memorial must survive in its wake. Bonds are tested, love is lost and the hospital bids farewell to Dr. Cristina Yang. Experience every heart-stopping moment in the “can’t miss” tenth season of ABC’s “Grey’s Anatomy.”

Following a massive mudslide, the hospital becomes a madhouse, and the lives of two doctors hang in the balance. The drama escalates as Arizona tries desperately to mend her broken marriage, while Derek and Meredith juggle their roles as surgeons and new parents. Meanwhile, a stunning betrayal pits Cristina against Meredith and, as April prepares for her big day, a familiar face returns to town. Big secrets lead to big problems and turn best friends into rivals.

Relive “Grey’s Anatomy: The Complete Tenth Season” like never before with DVD exclusive bonus features that take you behind the scenes and draw you closer into the lives of the unforgettable men and women of “Grey’s Anatomy.”

Extended Episode “Do You Know?”

Spotlight on Sandra Oh – Dr. Cristina Yang is one of the most beloved characters on Grey’s Anatomy. Get to know the actress who plays her as we sit with Sandra and reminisce about her favorite moments and memories, as she winds up her 10-year run.

Medical, Medical – The medical procedures on Grey’s Anatomy have intensified the hospital drama since day one. In this featurette, watch selected cast members get a tutorial from medical producer Linda Klein. From sewing stitches to starting a central line, we’ll see what it takes for the actors to pull off their TV surgical skills.