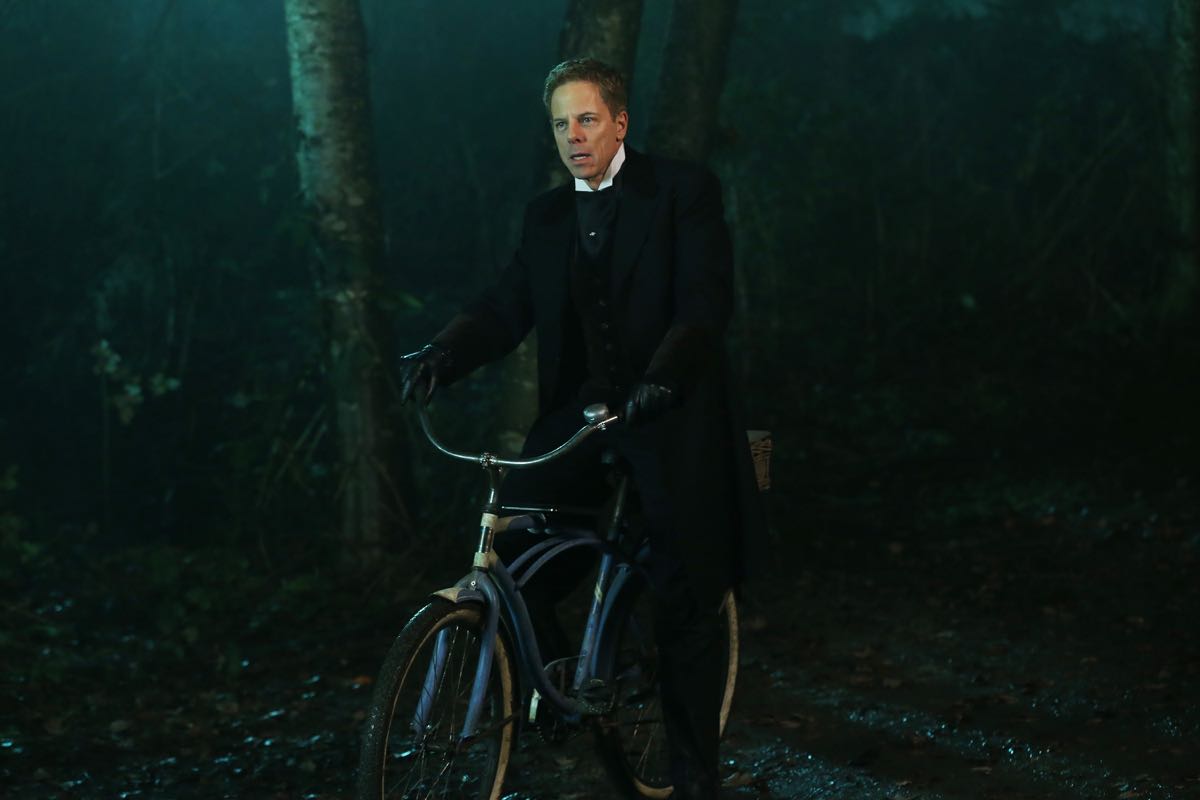 Veteran TV actor Greg Germann, best known for his role on Ally McBeal, is now heating up the screen on ABC’s Once Upon a Time in the devilish role of Hades, King of the Underworld. Germann is clearly relishing his role as the most evil villain of them all, but just because Hades rules the Underworld doesn’t mean he is devoid of humanity. The character has been a breath of much needed sulfuric air to Season 5 and in the Sunday, April 3 outing, Hades is only going to get better as the series delves into his complicated past with Zelena (Rebecca Mader).

Germann recently chatted with Seat42F about Hades’ unexpected love life, why this character is so much fun to play, and much more.

What can you tell us about Hades and Zelena’s relationship?

Germann: I think there is a kind of commonality between the two of them. There is some similarity in how they feel they have been treated in their lives – their lives that have gone on for thousands of years. I think what is great that Adam [Horowitz) and Eddie [Kitsis] do with all of these characters, is they drill down to what is ultimately human about them, as iconic as they are to all of us. So these two, when you meet somebody that you feel like you have a certain amount of simpatico with, that they have survived some of the same things that you have survived, you are drawn to that person powerfully.

Love has always been powerful on Once Upon a Time. Do you think Zelena could be Hades’ weakness?

Germann: All the characters, as powerful as any one of them seems to be, Adam and Eddie also mine the Achilles’ heel of these characters. Whether it is Zelena or something else, you can imagine that someplace in there he has some weakness. If Superman can have kryptonite, Hades can have something and it might be Zelena, but it might not be.

I think it is true that as powerful as Hades seems to be at this moment, it could be that these guys figure out a way to push back. They haven’t figured it out yet.

The series has cycled through a lot of villains — many of them are in the Underworld — how does Hades compare?

Germann: I think you would agree that he is by far the best villain the show has had on, I mean that’s not from me, I think you are clearly writing that down as we speak. I don’t know, I can’t really speak to the other villains, but God, playing this part is so much fun because Adam and Eddie really give you a lot of license to make it your own. I mean Hades is a character in mythology that all of us have some reference to, whether it is the animated version that is recent, or the 2,000 years of mythology behind it. Now what Adam and Eddie do is they put this character up there and then take the shackles of our perception of this character and let them go.

It makes a character like this who seems to be all powerful just so much fun to play. It is just delicious to play. Every script that I’ve gotten is so inventive and there seems to be no limitations of what I can do, and then underneath that as powerful as he is, there is this human quality. Love is in there. Even with a character like Hades, there’s desire and wish fulfillment in there. It just makes a villain like Hades the most fun to play.

What do you enjoy most about your scenes with Mr. Gold, Robert Carlyle?

Germann: I’m the new kid on the block and you jump into a cast like this and all of them – Rebecca, Jennifer [Morrison], Lana [Parrilla], Colin [O’Donoghue], Robert — they are all great actors, and when I saw that I got to play a lot of scenes with Bobby, what an incredible treat. I’ve been a huge fan of his for years and he is a great actor, and then the scenes that they give us to play are just ridiculously fun. It’s like when you get on the court with a great tennis player. He hits the ball back really hard, so you have to raise your game, and hope you can get your racket on it.

What has been your favorite Hades moment or scene?

Germann: There’s stuff coming up that is so much fun. The first day I showed up on set, the first scene I shot was the scene with Barbara Hershey where she is down in the Underworld and I am getting a pedicure. I had called up Eddie and Adam from Canada, they’re out in Los Angeles, and I got the scene, and I was like, I’m in the Underworld and this is where I live, so I should be doing something that I do every day, like maybe getting a pedicure. Without hesitation, they said that is great and right away that set the tone for me that not only are they open to being inventive and of making it my own, but we can kind of push the preconceptions about who this character is and push them out of the window and make it something fresh.

It has made each scene fun to play, but I think back to playing that scene and being able to sit there and get a pedicure while I one up Barbara Hershey that was a really fun way to jump into such a fun show.

What is your all time favorite Disney movie?

Germann: That’s a tough one because from Fantasia to Snow White, the older Disney films still hold up and still are incredible, I wouldn’t even know how to pick. If I had to, I would say Fantasia because it is so extraordinary and is still so extraordinary when you see it on the big screen. It’s quite an experience.

Once Upon a Time airs Sundays at 8/7c on ABC.