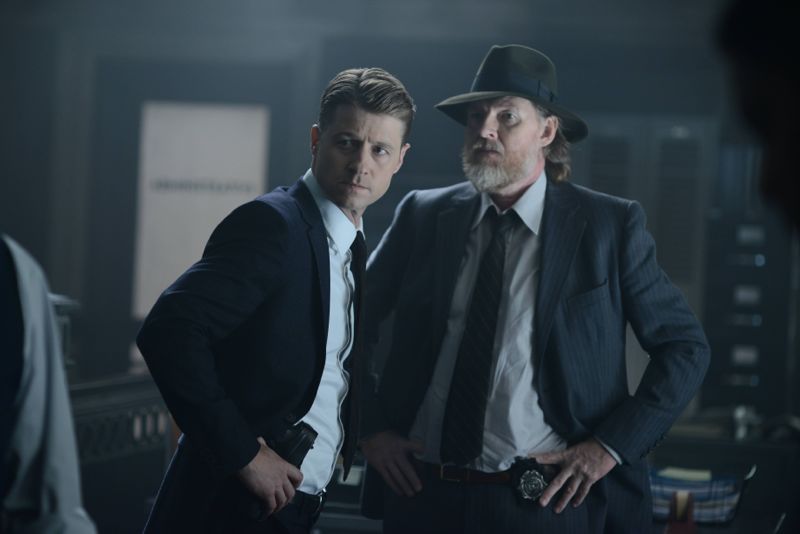 On this week’s GOTHAM, the new police captain, Nathaniel Barnes (Michael Chiklis, American Horror Story: Freak Show), forms a “Strike Force.” He is intent to weed out corruption within the force, and while Harvey (Donal Logue) has his doubts that Barnes will be effective, Barnes is speaking Gordon’s (Ben McKenzie) language. Who will be right?

Barnes is doing what Gordon has been trying to do for two years, and that’s clean things up. But by the time Barnes arrives, Gordon has already made compromises in order to further his goals. Namely, Gordon has done favors for Penguin (Robin Lord Taylor), meaning Gordon is the type of cop Barnes is looking to get rid of. Is this a sign that Barnes is doomed to fail, as even a man as noble as Gordon eventually has to give in to the grime of GOTHAM? Or does this just mean Gordon should be careful what he wishes for?

For now, Barnes believes the persona that Gordon shows. Sure, the new captain is quick to mention that everyone knows Gordon is banging Dr. Thompkins (Morena Baccarin). But Gordon is a soldier, and Barnes puts Gordon in charge of the “Strike Force.” That the force will now be going against the Penguin directly presents a conflict for Gordon, but until they have that showdown, he’s doing all right.

Speaking of the Penguin, he’s a little too busy to give much thought to the police, thinking he has Gordon to watch his back on that front. Instead, he’s concerned about Theo (James Frain) capturing his mother (Carol Kane). The Penguin doesn’t see an immediate way to rescue her and has to play along with Theo for now, as frustrating as that is for the villain. But as the Penguin points out, other bosses have underestimated him in the past and he’s come out on top. Did Theo tick off the wrong guy, or has the Penguin met his match? (My guess is the former.)

While Theo gets Penguin in line, Theo is also running for mayor of GOTHAM. His methods of doing so, having goons kill the competition, are far from noble, which I’m certain tells us what kind of mayor he’s going to be. The question is, what will he do when he’s in power? And will he make it that far?

One thing Theo does is make inroads with Bruce Wayne (David Mazouz) by setting the boy up with a girl his own age, Silver (Natalie Alyn Lind, The Goldbergs). I’d hope that Silver isn’t as wicked as Theo, but one never knows. She’s certainly playing along with Bruce well. One may wonder why Theo wants to endear himself to a kid, but given Bruce’s fortune and family influence, it’s easy to see why Theo would want to get in early with the billionaire.

The one scene in “Strike Force” that doesn’t ring true to me is when Alfred (Sean Pertwee) decks Selina (Camren Bicondova). I get why Alfred hates Selina and thinks she’s a bad influence on Bruce, what with Selina killing Alfred’s friend and all, but is that an excuse to slug a child? Especially a female child? I don’t believe it is, and I don’t see why Alfred would do this. Were his or Bruce’s lives in danger, maybe, but not during an encounter on the street. It is weird.

The budding relationship between Nygma (Cory Michael Smith) and Kristen Kringle (Chelsea Spack) is also a little weird. Sure, she’s attracted to him when he acts tough, but she then reassures him when he shows vulnerability? That feels a little off to me, but I’m still enjoying Nygma’s descent enough to overlook this unevenness, or even wonder if it’s just happening in his head.

Still, for the most part, GOTHAM maintains its web of various heroes and villains struggling for control of a crumbling city in top form. The metropolis has further to fall before it can be saved, but the journey of the fall is fascinating in of itself.