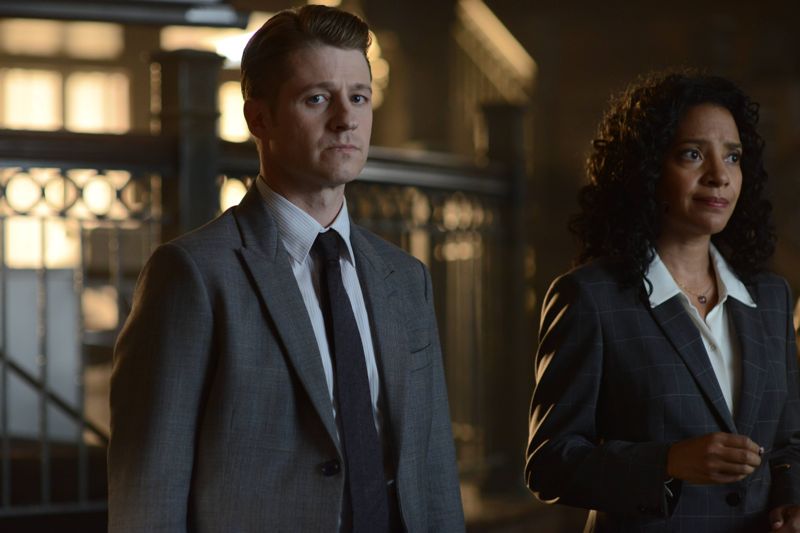 As good as GOTHAM’s sophomore premiere is, the second installment, “Knock, Knock,” is even better. Gordon (Ben McKenzie) attempts to get Bullock (Donal Logue) to come back to work, but his former partner resists the force, happy at home with his fiancé, Scottie (Maria Thayer). Meanwhile, Bruce (David Mazouz) and Alfred (Sean Pertwee) clash in a big way, and Galavan (James Frain) coaches his crew, though will he be able to control them for long?

“Knock, Knock” is the episode in which The Joker breaks out in a big, big way. While it’s true that the moniker has yet to be uttered, there is no mistaking whom Jerome Valeska (Cameron Monaghan, Shameless) is as he gives a chilling, insane performance. Jerome is the villain who surprises, and the one who is hard to predict and understand. His slaughter at the police headquarters is maybe the darkest thing GOTHAM has done thus far, and it sets him up to be the most dangerous personality in a city choked with dangerous personalities, the first to truly give The Penguin (Robin Lord Taylor) a run for his money. I think if Galavan tries to continue to control Jerome, Galavan will not be long for GOTHAM.

I am disappointed to see so many officers get up off the floor at the end of “Knock, Knock.” It is plenty clear that Jerome and his men are not taking prisoners, and while I’ll forgive them for missing Leslie (Morena Baccarin), who hid, and Nygma (Cory Michael Smith), who heroically saved Ms. Kringle (Chelsea Spack), it doesn’t seem like they are leaving many alive at the time of the assault. I can’t help but wonder if the network required the shot of officers standing up to make the whole thing seem less violent for a broadcast network airing. It takes away from the brutality of the attack a bit. But that’s really the only weak spot in an otherwise outstanding episode.

Of course, Jerome’s actions prompt Bullock to return to work, which is super necessary. Essen’s (Zabryna Guevara) death is tragic, but it is also meaningful. We know Gordon and the police force have to be losing the struggle before Batman eventually shows up on scene, and “Knock, Knock” is the first big victory we see for the baddies. By losing Essen, the good side will galvanize and the war should begin to become all-out in the near future.

Speaking of Batman, I still can’t believe GOTHAM won’t show the caped crusader. It is true that Bruce is very young, but he already has Alfred training him and Lucius Fox (Chris Chalk) helping him set up the Batcave. We are in early stages of a superhero here, and I think we need a teenage Batman to enter and join the fight by season three or four. He can train with Ra’s over summer hiatus, no?

I am incredibly surprised at how far Barbara (Erin Richards) has fallen. Hanging around with villains is one thing, but “Knock, Knock” finds her taking an active, willing role in their nefarious deeds. She lures Gordon out of the precinct, allows him to be beaten up, then jumps on his chest and kisses him. She’s not only evil, she also seems crazy. This means that when she claims to ‘not be sick,’ she could very be wrong, and there’s still a chance that, with proper counseling, she could come back to him. But right now, that seems a far-off prospect.

GOTHAM has a lot of personalities to juggle, and the more they add, the less time the others get. Yet, the way “Knock, Knock” manages to serve Essen, Gordon, Bullock, Nygma, Bruce, Alfred, Barbara, and Jerome all so well proves how the writers have become quite adept at balancing everyone. With so much packed into a single episode, the possibilities open in the twenty episodes left this year are many, not to mention the multiple years this show should get in the future. With smart pacing and expertly woven complex webs, GOTHAM has the potential to be around for a long time, and deserves to be if it can keep up what it’s already doing.