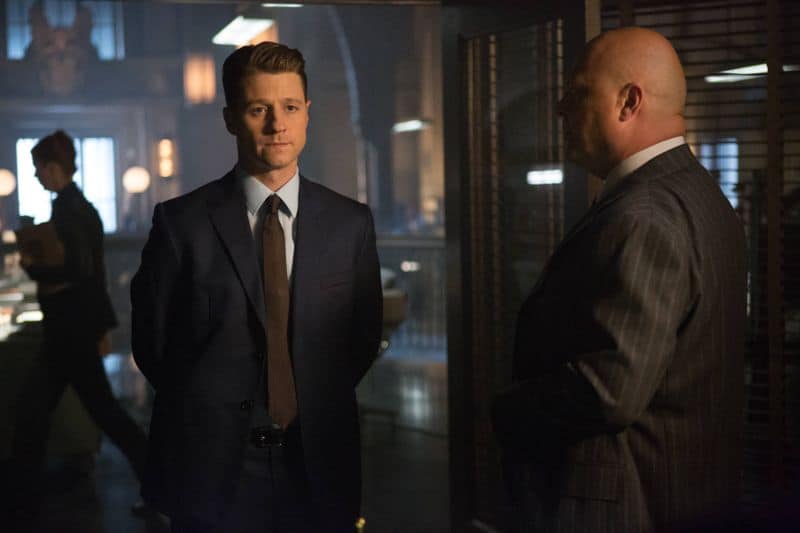 This week’s GOTHAM on FOX, “By Fire,” finds Gordon (Ben McKenzie) tracking down Firefly (Michelle Veintimilla), seeking vengeance for the death of a cop. But when Selina (Camren Bicondova) helps Gordon to see the truth about Bridgit, the girl in the Firefly suit, Gordon promises to do what he can to keep her safe. Too bad Gordon’s promise isn’t enough.

I find “By Fire” really interesting because it shows us the two sides of GOTHAM, while reminding us there is a grey area, much as Captain Barnes (Michael Chiklis) may not want to see it. Until Gordon knows about Bridgit, he sees Firefly as only a masked villain murderer. On the other side, Selina sees Bridgit as merely a friend, not a supervillain that must be stopped. While the truth is in the middle, one side or the other has to win, and that’s where the conflict comes into play.

I do think Gordon genuinely tries to save Bridgit, but not everyone can be saved. Gordon is wise enough to get past his emotions when someone is in need of help. He sees an abused girl that has been pushed too far, where Barnes does not. Unfortunately, Bridgit is even further off the rails than suspected, and there’s no way to bring her in peacefully, per her choice.

The twist at the end, where we find Bridgit is alive in a dark subsidiary of Wayne Enterprises, is interesting. Clearly, Indian Hill, the facility in question, contains many of the secrets that Bruce (David Mazouz) is looking for. We don’t yet know what is going on there or why or who is in control of it, but this is a nice setup for future GOTHAM installments.

Speaking of Bruce, he seems completely taken in by Silver (Natalie Alyn Lind) and her Uncle Theo (James Frain). This is unfortunate, as viewers know the kind face put forward by them in “By Fire” is a lie. I do think Theo is underestimating the rich kid, Bruce’s training with Alfred (Sean Pertwee) progressing nicely, but the question now is, will Bruce realize it before Theo can cause too much damage? And is Silver complicit?

Similarly, Theo is winning against the Penguin (Oswald Cobbleport). Sending Butch (Drew Powell) in to spy is an obvious move, and even with his hand chopped off, Theo sees right through it. Penguin is allowing too much of his emotion to cloud his judgment and he’s not making smart calls, not even realizing when Butch has been turned against him. I still think Penguin will be the one to take Theo down, possibly assisted by Gordon protecting Bruce, but at this time, the Penguin is definitely down in scoring.

While the Penguin is already the villain he’s meant to be, give or take a bit of skill, others in GOTHAM are just getting started. What happens with Bridgit may be a turning point for Selina, who no longer trusts Gordon. Selina is an interesting player because, traditionally, Catwoman has rarely been completely bad. She does bad things, sure, but her flirtation with Bruce shows her humanity and moral center. I can’t help but feel these traits might keep Selina from turning as fully against Gordon as she appears to do, but one never knows. Selina’s positive relationship is usually shown to be with Bruce alone, not the police.

A bigger defining moment in “By Fire” comes when Nygma (Cory Michael Smith) accidentally strangles Kristen (Chelsea Spack). I wondered if this specific event, more or less, might happen when Spack was not promoted to series regular this year, but didn’t expect it so soon. Nygma letting his dark side rob him of the love he so desperately wants is definitely a moment that will change who he is going forward. I expect Nygma’s growth into full-on villain is just around the corner, though he could still be hiding within the police force for awhile, the longer, the better.

Can I just remark how cool it is when Lee (Morena Baccarin) regards Selina and her gun with no concern whatsoever? Obviously, Lee is a worthy partner for Gordon and is on his level, but to barely bat an eye in the face of danger, keeping her cool, is excellent. It’s likely Lee, who is good at reading people, realizes Selina isn’t going to kill her for no reason, but still, very impressive composure.

Excellent character development and a complex villain-of-the-week make “By Fire” another strong installment of this program. Season two is doing exactly what the show needs it to do, and it is definitely worth setting the DVR for.