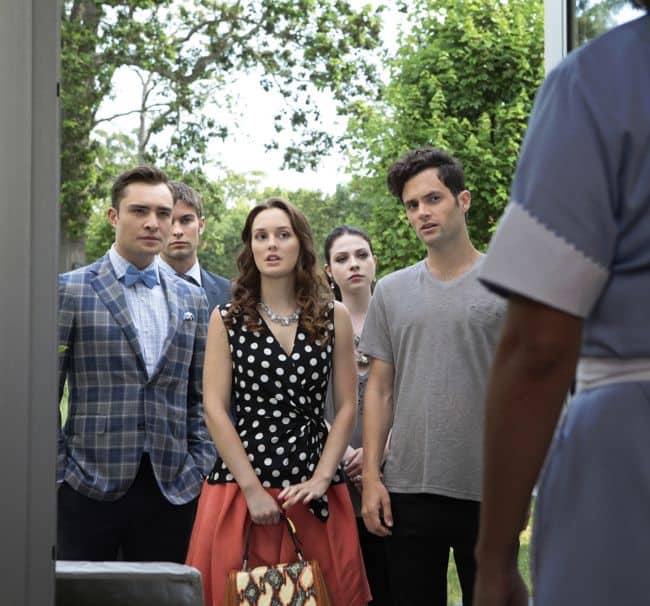 There is a slight whiff of finality in the CW’s GOSSIP GIRL season premiere, “Gone Maybe Gone.” Even Gossip Girl herself (Kristen Bell) admits that this fall will be her last season. But she also promises that the best is yet to come, and considering how messed up just about every character’s life is right now, there is still a lot that needs to happen between now and the last episode.

Dan (Penn Badgley) is the most surprising. He has fled to Rome with Georgina (Michelle Trachtenberg) where he is writing a tell-all book about his “friends” on the Upper East Side. Dan has always been a good guy, and even if his first book, written with pseudonyms, caused some people harm, it wasn’t mean-spirited. Now, he has tossed out his scruples, teamed up with a psycho, and is intent on doing as much damage as he can.

Will Dan really be able to go through with this? Yes, Blair (Leighton Meester) dumping him did leave things for him to work through, especially when, from what he can see, she isn’t even with Chuck (Ed Westwick). And Serena (Blake Lively) is exposed in his eyes now as a manipulative shrew. But Nate (Chace Crawford) never did anything to Dan. Bottom line, I don’t believe Dan has it in him to actually burn all of his bridges because he just isn’t that mean. Sadly, Georgina’s involvement may mean that the decision will not be left up to him.

Does this mean that Dan isn’t destined to end up with either Serena or Blair? Drawn into their world, and having had meaningful relationships with both, it has always appeared that he’ll get one of them in the end. But if this book sees the light of day, it could be years before anyone forgives him, creating a major obstacle to a romantic happy ending for Dan. Unless there is a significant time jump.

Most disappointing is Rufus (Matthew Settle). It is one thing for him to take Ivy (Kaylee Defer) in. It’s quite another for him to sleep with her. Even if, as she points out, she is not a kid, and he is not married, this hook up is as disturbing for viewers as it is for Dan. She is way too young for him. Rufus should know better. It tarnishes his image badly.

It’s too bad Ivy is just using Rufus for some nefarious, unknown purpose that is somehow connected to Lola (Ella Rae Peck). Both Ivy and Lola seemed like good girls. Ivy lied to everyone, but she came to care about them, and tried really hard to prove her attachments were real. She is lonely, and wants someone to care about. Lola doesn’t want anything to do with the slimy world of the rich. Yet, they have targeted Rufus, one of the more upstanding citizens in GOSSIP GIRL. Why?

One of the couples that should be together in the end is Rufus and Lily (Kelly Rutherford). They’ve been through a lot, and since the beginning of the show, many fans have rooted for them to make it work. I blame Lily for most of the problems last spring that preceded their split. She has fully embraced the ugly side of her world, no longer allowing Rufus to positively rub off on her, much as her daughter has, which is what similarly turned Dan against Serena. But now that Rufus is sexually involved with Ivy, this complicates matters even more. Can Rufus and Lily both be redeemed?

When last season ended, Serena is on drugs in a train. Considering that she is found passed out with blood running out of her nose, it seems far-fetched that no one is contacted about her. Surely she was taken to a hospital and next of kin would be notified?

Yet, this can be overlooked when one sees her new life with Steven (Barry Watson, Samantha Who?, 7th Heaven). She alone has escaped Manhattan and all of the bad parts of her life that are rooted there. She has moved past the games, and gotten away, finally ready to start over the way she should.

Or has she? By lying to Steven about who she is, is she really doing any better than before? And with her return to New York at the end of “Gone Maybe Gone” it seems likely that she will fall back into old habits, no matter how much she wants to avoid that. Can Steven be a ticket to happiness for her, or is he a temporary stop before she returns to her old life?

Blair and Chuck’s arrangement is almost as surprising as Serena’s fate. At first, Dan’s perspective seems correct, that they are just making excuses to not be together. Then there’s that so-sweet limo scene, where Chuck lays out exactly what his feelings are, and why he has to do what he’s doing. Even if it requires a sacrifice on Blair’s part, his reasons are noble, and by his attitude, it’s certain that they will truly be together soon. Are we done with the drama between them, finally settled down as a couple? That would actually be welcome, this close to the end.

In fact, in “Gone Maybe Gone” a trend that has been growing stronger over the last couple of years is pretty obvious. No matter what their issues may be, this group of young people, the main characters of GOSSIP GIRL, have formed strong, adult friendships. Even if Serena hides, or Dan considers exposing dirty secrets, they do still all care about each other. The group crashing of the wedding, besides being a great, fun scene, proves that. They have grown up enough not to declare war the way that they used to, and it looks like that GOSSIP GIRL will end with them all on a united front.

United for what? To bring down Gossip Girl? Who is Gossip Girl? She has to be someone we’ve seen before, but pretty much all the main characters have been ruled out, especially Nate, Serena, and Georgina. Does Nate have to honor their deal, considering that she played him again? Will GOSSIP GIRL ever expose who Gossip Girl is? And assuming there is a big reveal, what kind of shift will that cause in the way we view the series as a whole? Lots of reasons to watch this final season.

GOSSIP GIRL airs Mondays at 9 p.m. ET on the CW.