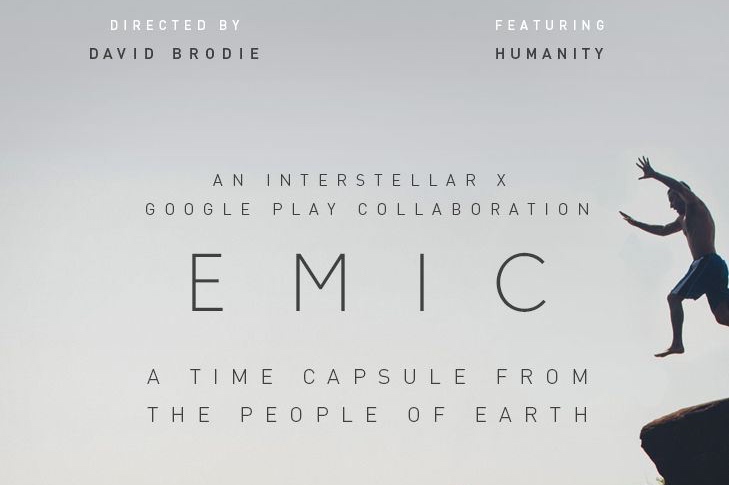 Inspired by Paramount’s Academy Award®-winning epic, Interstellar, Google Play today announced the release of EMIC – a short film comprised of almost 8,000 video submissions from people all around the world, highlighting the human spirit and how that manifests itself around the globe.   From director and editor David Brodie (The Witness, Survivors) and creative director Angus Wall (The Girl with the Dragon Tattoo, The Social Network), the short film will be available to audiences for free on Google Play timed to the digital home entertainment release of Interstellar on March 17, 2015 at g.co/EMIC.

Titled EMIC – after the anthropological term referencing the analysis of culture – the film asked this generation to archive their moment in time by submitting memorable and inspiring photos, music performances, poetry and artwork to give future generations a way to remember Earth as it is today.

Interstellar stars Matthew McConaughey, Anne Hathaway, Jessica Chastain, Bill Irwin, Ellen Burstyn, John Lithgow and Michael Caine. With time on Earth coming to an end, a team of explorers undertakes the most important mission in human history: traveling beyond this galaxy to discover whether mankind has a future among the stars. Directed by Christopher Nolan, written by Jonathan Nolan and Christopher Nolan, and produced by Emma Thomas, Christopher Nolan and Lynda Obst.