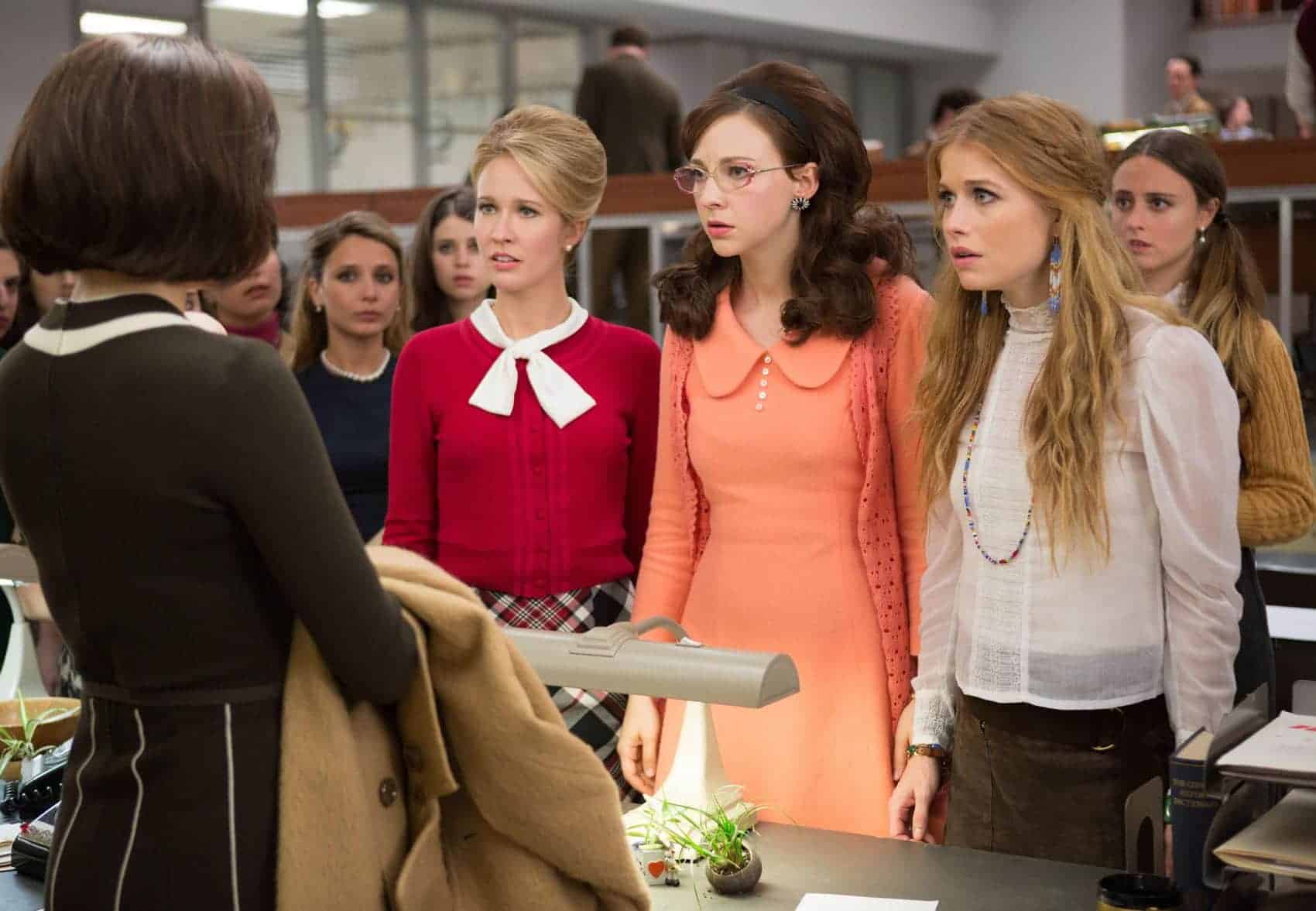 Amazon has a new period drama called GOOD GIRLS REVOLT, which premieres this week. Set in the late 1960s, it’s a drama about the employees of a newsroom for a magazine (similar to Newsweek) called News of the World. Specifically, the characters at the center are women ‘researchers’ who essentially do all the work of writing the articles, but get none of the credit because of the sexism of the time. Now, they’re ready to fight for their rights and recognition.

GOOD GIRVLS REVOLT is confusing because it’s got a lot of real elements, but is not actually a true story. For instance, the events mentioned that are reported on more or less actually happened. Several characters, including Eleanor Holmes Norton (Joy Bryant, Parenthood) and Nora Ephron (Grace Gummer, Mr. Robot, The Newsroom), are real people. Yet, what they are doing isn’t true to life. Ephron did work for Newsweek, but at a different time, and for a longer period than what the show portrays.

Because of the real names and events, viewers are likely to be tricked into thinking this is a true story. I feel like that’s kind of dangerous. It’s absolutely fair to take a little creative license when portraying historical happenings, but GOOD GIRLS REVOLT isn’t doing that. Instead, it’s misleading to lend itself unnecessary and unwarranted authenticity. This is purely personal opinion, but I don’t approve of that sort of element at all.

Taken on its own, I did enjoy the pilot of GOOD GIRLS REVOLT, before I looked into how accurate it was. It’s very easy to get behind two of the three main women, Patti (Genevieve Angelson, Backstrom) and Cindy (Erin Darke, Love & Mercy), and root for them to succeed. It’s also a timely tale as the first female candidate of a major political party runs for office in a race beseeched by sexism, so it seems important to bring these things up.

However, the show is also pretty predictable and one-dimensional. The costumes and music are almost a bit too over the top, and the drug use and penis sculptures just make it seem ridiculous. Could people have acted like this? Perhaps. Did they? Probably not to this extent. This is more a vision of what modern viewers think the 1960s was like, taken in a cartoonish fashion. Even Patti, Cindy, Nora, and Eleanor are more archetypes than complex characters.

The one player that gets a bit of depth, Jane (Anna Camp, The Good Wife, Pitch Perfect), is not likeable. I’m not complaining about the actress; I’ve enjoyed Camp very much in several other projects. But instead of letting us see the internal struggle she is going through, wanting to hold onto the achievements she has made and afraid of rocking the boat, it’s actually surprising when Jane does the right thing in episode one because she’s shown to be such a cold person prior to this. We don’t get any insight into why she makes that decision.

There are men in the show, too, specifically, Chris Diamantopoulos (Silicon Valley), Hunter Parrish (Weeds), and Jim Belushi (According to Jim). They fare no better than the women, coming across as entitled bullies who may like girls that know their place, but certainly aren’t going to join the cause of gender equality. They aren’t outright villains, but are (mostly) quietly prejudiced. They are simply the obstacles in the way that must be toppled.

I do kind of want to see where GOOD GIRLS REVOLT is going. I like enough of the elements to be curious about episode two. Yet, that’s more because of a fascination with an era and the positive feelings I get from watching women kick butt than the show’s own merits enticing me.

GOOD GIRLS REVOLT season one will be released on Amazon this Friday.