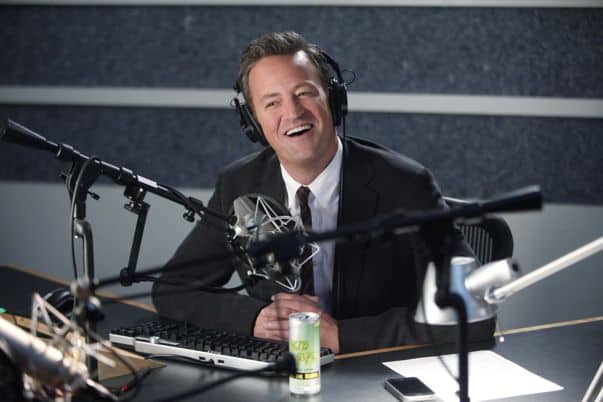 GO ON is about a popular sportscaster named Ryan (Matthew Perry, Friends, Studio 60 On the Sunset Strip) who wants to return to work a month after the death of his wife. Ryan’s boss, Steven (John Cho, Star Trek, Harold & Kumar Go to Whitecastle), tells Ryan to attend ten counseling sessions first, to make sure he’s mentally up to the task. But Ryan doesn’t believe in therapy, making a mockery of the situation, to the delight of the rest of the troubled group. His new therapist, Lauren (Laura Benanti, Eli Stone, The Playboy Club).

This is an excellent series, fully worthy of Perry’s talents. While the actor has struggled in recent years to find a show that stays on the air, GO ON might just be the one to do, if the “Pilot” is any indication. It’s very funny, but the story also goes very dark, allowing Perry to play drama and comedy, sometimes simultaneously. It’s a winning mix, showing vulnerability while making people laugh, and one that should prove popular with television viewers.

Were the series riding on Perry’s wave alone, as excellent as he is, that might not be enough. Instead, Perry is surrounded by a very talented ensemble. Playing the members of his therapy group are Suzy Nakamura (Dodgeball, The West Wing), Brett Gelman (Eagleheart), Tyler James Williams (Everybody Hates Chris), Seth Morris (Happy Endings), Tonita Casto (Funny People), Sarah Baker (Free Radio), Bill Cobbs (Night at the Museum), and Julie White (Grace Under Fire, Transformers). Each plays a pivotal role in the first episode’s success, and coming together, make for a heck of a team.

This therapy group plot does make parts of GO ON seems a little like another NBC sitcom, Community. There is a feel good style of helping each other out and bonding, even though they are brought together from different walks of life. These people may not have sought each other out as friends, but thrust together, they are stronger for the relationships. While GO ON will probably not be goofy and meta like Community, there are a plethora of ways the plot could go with such a strong ensemble.

Of course, there is romantic tension, too. This exists between Ryan and Lauren. At first, this results in a slight bit of ickiness, considering she is the mental health professional assigned to treat him. Until we learn that she’s not exactly so professional. Then, things quickly become acceptable. Ryan is in no position to rush into anything just yet, but the groundwork is already being laid between the two.

Which doesn’t make the series predictable. In fact, nothing about the “Pilot” is all that obvious. There are subtle moments and deep understandings mixed with startling drama and great jokes. It’s hard to predict each zig and zag, but the developments feel natural and flow well. It’s some seriously good storytelling, perhaps more sophisticated than most half hour comedies.

GO ON lags when focusing on Ryan’s job. Cho does OK, and Allison Miller (Terra Nova, Kings) is fine as Ryan’s assistant. But every time these characters are on screen, and Perry goes back to reality, the story lags just a bit. Sure, viewers need to see how Perry will cope with the real world, as he can’t stay in his happy bubble forever. These parts just aren’t developed as well as the group scenes. Perhaps this will change in time, or maybe Ryan’s work just won’t be a huge focus.

In all, GO ON works extremely well, for all of the aforementioned reasons. There is a broad enough appeal that it should have no trouble finding an audience, and avoids serving any niche too fully. Yet, it still has a very high addictive quality because it is so well made, so it’s not just fluff for the masses. Check out GO ON tonight after the Olympics, and when it premieres on September 11th.