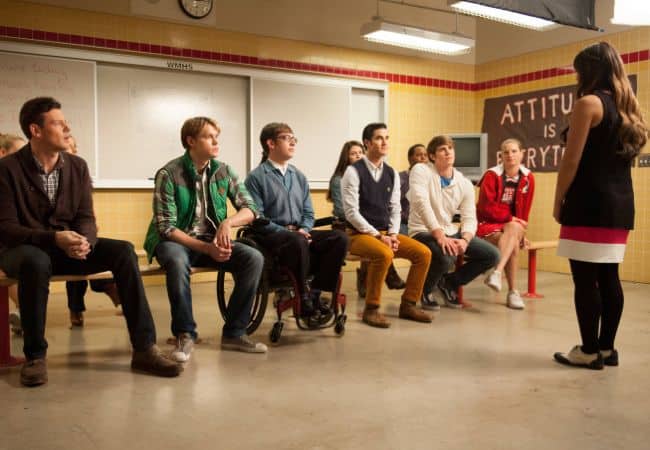 “GLEE debuted as the first and only successful musical comedy series on television, and more than four years later, it continues to defy genres, break new ground and have a significant impact on popular culture,” said Reilly. “Week in and week out, Ryan Murphy, Brad Falchuk, Ian Brennan, Dante DiLoreto and the entire GLEE team deliver a series that not only delights and surprises fans, but also inspires them to talk about, share, debate and engage with the show – and I’m absolutely thrilled to have them on board for another two seasons.”

“GLEE has been a signature series for the studio since its launch four years ago and we couldn’t be happier that FOX has ordered two more seasons,” commented Twentieth Century Fox Television Chairmen Dana Walden and Gary Newman. “Ryan, Brad, Ian and Dante have created something that is far larger than a television show; it’s a global entertainment brand which continues to touch millions around the world. From its chart-topping musical numbers to its inventive storytelling and rich, complex characters, GLEE rewrote the rules of what network television could be, and we are enormously proud to be the studio behind it.”

“I am very grateful to Kevin, Dana and Gary for their incredible support of this series from the beginning,” added Murphy. “But I also want to thank our loyal audience, whose passion and enthusiasm continue to amaze and inspire us.”

Over the past four seasons, GLEE has built a loyal fan base of “Gleeks”; made tracksuits, musicals and outcasts cool again; attracted A-list guest stars from Kate Hudson and Katey Sagal to Sarah Jessica Parker and Gwyneth Paltrow; covered music from Michael Jackson, Lady Gaga, Madonna and Stevie Wonder; and received prestigious awards and nominations, from the Golden Globes to the Writers Guild. This hit series and its extraordinary characters have become an indelible part of pop culture and will continue entertaining fans through 2015.

Last month, the series reached its milestone 500th performance with a rendition of the anthem, “Shout.” GLEE music continues to shatter records with more than 53 million GLEE tracks digitally downloaded and more than 13 million albums sold worldwide. GLEE albums have garnered two platinum albums (sales in excess of 1 million units) and five gold albums (sales in excess of 500,000 units). Also, the GLEE cast holds the record for most singles to ever enter the Billboard Hot 100 chart (203 tracks to date), surpassing records previously held by Elvis Presley, the Beatles and James Brown.