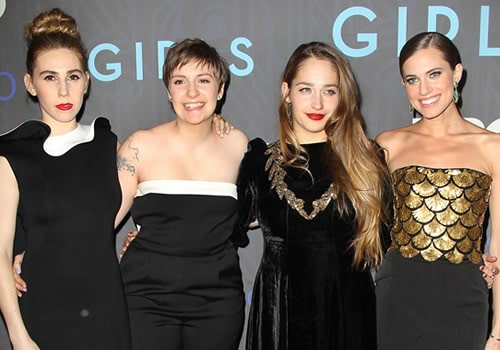 HBO’s GIRLS is back this Sunday, January 13th at 9 p.m. ET with “It’s About Time.” And while the titular characters may be slightly older, they are still far too immature to be called women, no matter what they do sexually.

Hannah (Lena Dunham) just cannot make up her mind about what she wants. Should she keep taking care of Adam (Adam Driver), who has been hit by a truck, and is now fully admitting his love for her, or should she hook up some more with the new guy (Donald Glover, Community) that she’s been seeing on the side?

Why can’t Hannah make a decision? She is plenty confident in picking a party theme idea, or stripping off her dress without hesitation, but she has no will to choose a man to be with. It’s not that she’s not getting enough sex with Adam, or that he’s still being mean; it’s more that she doesn’t know what she wants, so she can’t let herself be happy with what she has. Adam seems like a good match for her, but she isn’t willing to admit that, so she bed hops.

Unfortunately, it’s not fair to either of the guys. Adam has the biggest right to feel betrayed, considering how he has been sleeping with her for awhile, and has expressed his feelings. The newbie, meanwhile, seems to know about Adam, and doesn’t mind what’s going on, but only because Hannah presents the impression that she no longer cares for Adam. It’ll be interesting to see how Hannah eventually deals with being the unlikely (though I’m sure she expected it) center of a love triangle.

Thankfully, Hannah’s uncertainty doesn’t extend to her friends. She is careless with their emotions, as Marnie (Allison Williams) finds out when Hannah dismisses her feelings of loneliness. But Hannah does say she still loves Marnie, and wants to be good friends, despite their fight last year, so that’s something.

Marnie is sad because she has no guy and no job. Things aren’t made any easier when Hannah doesn’t have time for her and her ex, Charlie (Christopher Abbott), brings his new girl to Hannah’s party. This excuses Marnie’s almost hook-up with Hannah’s gay roommate, Elijah (The New Normal’s Andrew Rannells), which fails to happen because of him, not her. One cannot help but feel sorry for her, being in as depressing a place as she is in “It’s About Time,” and with no end in sight.

Still, is that an excuse for her to crawl back into Charlie’s bed? As unhappy as Charlie may be with his current girlfriend, he should never let Marnie sleep over until a break up happens. And Marnie should know better. But I guess that’s the folly of the young, and why they are still called GIRLS.

One thing that does seem odd in the episode is that Marnie continually makes a point to keep her boobs blocked from the camera during her semi-sex scene with Elijah. I respect that the actress doesn’t want to do the nude scenes, and no one is asking her to act like Dunham, completely free-wheeling. But when she holds her arm a certain way, then pulls her dress back up, as Elijah commits fully to the moment, and her character  is portrayed as wanting the intercourse, her modesty just feels awkward and wrong. Either she needs to show more skin, or her character shouldn’t have these types of scenes.

Speaking of sex, Shoshanna (Zosia Mamet) has been trying to get over her one night stand with Ray (Alex Karpovsky), even though, to paraphrase, she feels like something is missing without her hymen. Her resolve to avoid him, though, predictably breaks down when they meet in the bedroom during the party, and they end up making out.

What is the hesitation here? Yes, Shoshanna works best on the series in small doses, but Ray doesn’t seem to mind her personality. Why not let them be a couple? It would be very interesting to see how Shoshanna behaves when she begins to get regular sex, and we could use a little more Ray (or any decent guy) on screen.

If you’re a fan of Jessa (Jemima Kirke) and Thomas-John (Chris O’Dowd), I’m sorry to report that there’s really nothing to say about them in “It’s About Time.” However, given the end of the episode, that probably won’t be the case for long.

I admit, I was missing GIRLS, and “It’s About Time” it came back! It’s a quirky, unique, certain-of-itself show that doesn’t hold back, and always entertains. Even when a scene ventures too far into something I don’t really want to see, I don’t regret watching because the pay off is fantastic. The characters are authentic and more real than what exists in most of television. Overall, few complaints can be made. Welcome back, GIRLS!