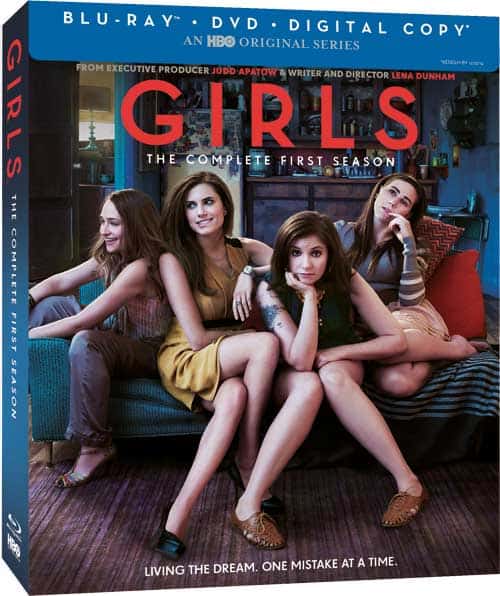 Seat42f and HBO have teamed up to give THREE lucky winners a copy of  GIRLS Season 1 on BLURAY. For a chance to win leave a comment below telling us why you want to add GIRLS Season 1 to your BLURAY collection. Only one entry per person. Contest ends December 21st. Winners will be notified on December 22nd via email so make sure to use a valid email address when you post your comment.

The latest breakout comedy series from HBO® – Girls® – debuts on home entertainment this winter, just in time for holiday gift giving and a few weeks before the premiere of season two. Created by and starring Lena Dunham, who also executive produced along with Emmy® winner Judd Apatow (Bridesmaids) and Jenni Konner (Help Me Help You), Girlstakes a comic look at the assorted humiliations and rare triumphs of a group of girls in their early 20s.Girls: The Complete First Season, releases on Blu-ray with HBO Select ($49.99), DVD ($39.98) and Digital Download on December 11, 2012 and features insightful and hilarious bonus features including gag reels, deleted scenes, cast interviews and much more.

Girls was nominated for five 2012 Emmy® Awards: Outstanding Comedy Series, Outstanding Lead Actress (Dunham), Outstanding Directing (Dunham), Outstanding Writing (Dunham) and Outstanding Casting. Hailed as “brilliant…perfect” (People Magazine) and “a revelation…hilarious” (New York Magazine), the series follows the lives of four twenty something’s – Hannah, Marnie, Jessa and Shoshanna – who are trying to figure life out. They’ve been living in New York for a couple of years, but they’re still not sure what they want – from boys, from each other, from themselves. And things aren’t getting any clearer. The answers aren’t always easy, but the search is profoundly relatable and infinitely amusing.