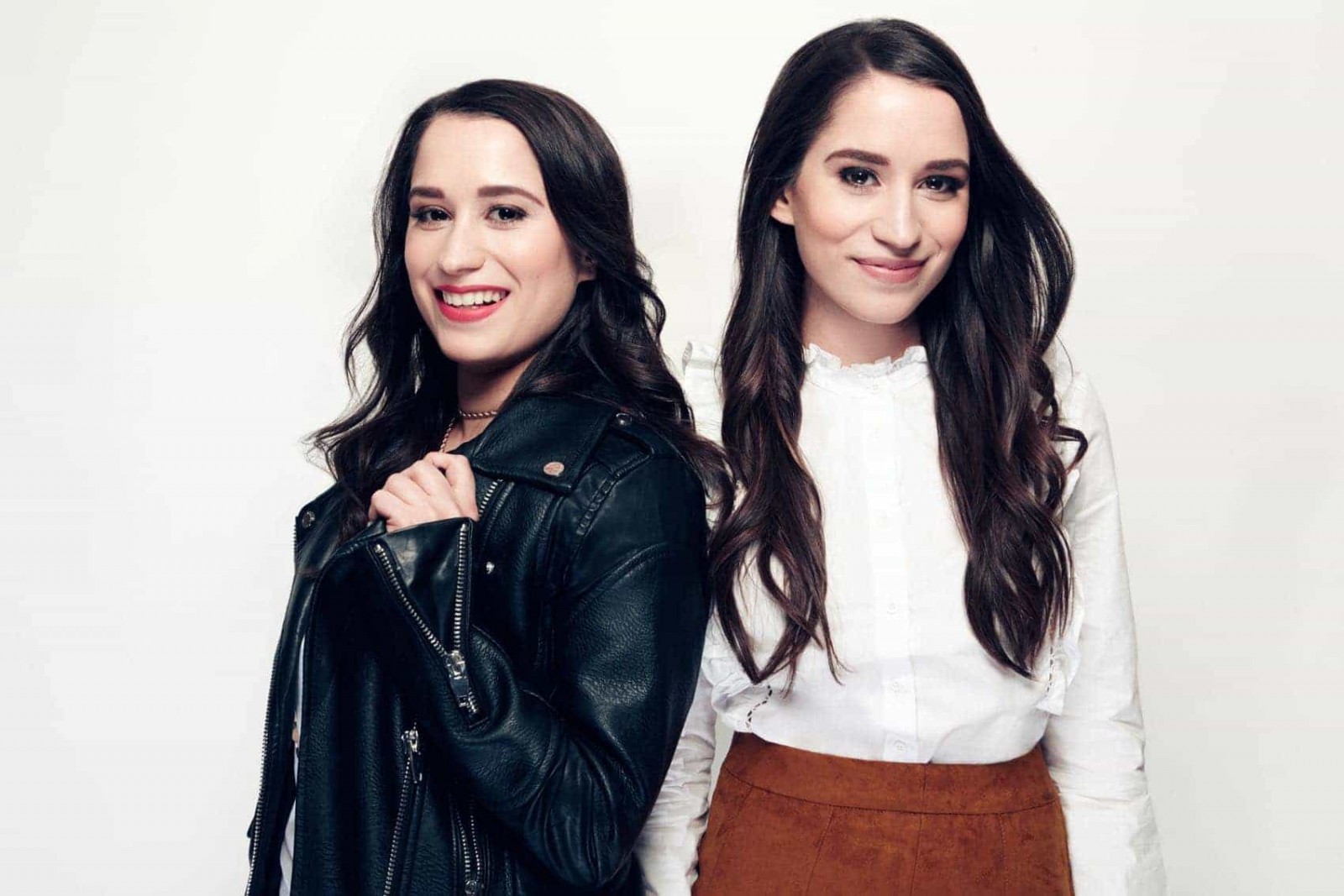 Living every girl’s teenage dream of being in an indie band, Melissa and Michelle Macedo not only portray characters in an indie band in Netflix’s new dramedy series GIRLBOSS, they are living the dream headlining their own indie band MACEDO.  In a perfect collision of reality blending with fiction, Michelle and Melissa happily embrace the musical mirroring that life has presented for them.  In an exclusive interview, Melissa and Michelle talk about the appeal of working on GIRLBOSS and the incredible opportunities arising through their music.

What initially appealed to you about the roles of Stacie and Stephanie and working on Netflix’s series GIRLBOSS?
MELISSA and MICHELLE:  We love the entire message behind the show and were instantly attracted to the characters and the series. It’s all about female empowerment and portraying women as human beings who are messy and flawed as opposed to an impossible ideal women have to live up to. We play a band on the show called “Animated Discussion.” We are the lead singers/guitarists of the band and Johnny Simmons (who plays Shane) is our drummer.

What do you most admire and/or like about your characters Stacie and Stephanie?
MELISSA and MICHELLE:  We think Stacie and Stephanie are badass ladies doing what they love and working hard at it, although there was a small moral lapse of judgment on Stephanie’s part.

How would you describe Stacie and Stephanie’s relationships with the other ladies in GIRLBOSS?
MELISSA and MICHELLE:  We don’t want to give too much away , but let’s just say there is a conflict with Sophia (Britt Robertson) on the show! We get along great with Shane (Johnny Simmons) and the rest of the band, played by Kimmy Shields and Becky Poole. We have great chemistry in the band and filming it was like hanging out with friends all day. We could talk about anything with them.

What was your favorite part about working on GIRLBOSS?
MELISSA and MICHELLE:  Our favorite part on working on GIRLBOSS was getting to work with all of the kickass women. Not only is Kay Cannon extremely intelligent, but she is witty and incredibly kind. Britt and Ellie are so kind, talented and hard working. It was truly an honor to watch all of these amazing women work.

What is it like working with the talented ensemble of actors, like Britt Robertson, Dean Norris and Johnny Simmons in GIRLBOSS?
MELISSA and MICHELLE:  It truly was an amazing set, no egos, everyone was kind to each other and treated each other well. That precedent was set by these true professionals. People were having a great time. You really can’t ask for better than that! Johnny Simmons was so much fun, always joking, and he was very respectful during our intimate moment.

What do you think audiences will enjoy about GIRLBOSS?
MELISSA and MICHELLE:  I think it will be refreshing for people to see a real, flawed woman who has moments of struggle and doubt yet stays resilient in the face of challenges. It really is so rare to see a woman who is messy and unapologetic for it, it’s a wonderful change and it is represents real life.

Do you get to sing in GIRLBOSS and if so, what songs?
MELISSA and MICHELLE:  We get to perform the songs not sing them (they are not our songs). They had that figured out before we even got to set. The songs were a blast to perform. We are releasing our original material right now!

What initially drew you into the world of song and performance?
MELISSA and MICHELLE:  Ever since we were little we’ve been performing and writing music together, it’s just something that came naturally to us and there was no question that we wanted to pursue it as a career. We come from a very musical family. Our dad introduced us to music in every genre imaginable. That is how we fell in love with jazz, classical, soul, pop and folk. Our childhood was filled with everything from Sam Cooke and Otis Redding to Debussy to The Beatles. Our maternal grandmother played piano and our dad plays as well. There really isn’t a genre we didn’t grow up listening to. We both grew up playing piano and some violin. Michelle started playing guitar when she was about 11 years old.  Today, Michelle plays the piano in the band and we both sing. We have sung together for as long as we can remember. We were always harmonizing and writing songs together. We grew up hitting up the local music scene and started to play live around L.A. when we were 16.

What was the moment when you realize that you had finally “made it” as singers and performers?
MELISSA and MICHELLE:  I would say the moment was when we decided that we believed in our talent and work ethic enough to truly pursue it. We both trained in theatre and grew up playing instruments and when we decided we were actually going to go for it professionally we had to make the decision to believe in ourselves. That’s the decision that really changes you, when you know you’re going to commit to yourself 100 percent, even when you fail, you get back up and keep going. I would say that was a GIRLBOSS moment.

How would you describe your style of music?
MELISSA and MICHELLE:  Indie pop. Feist meets Regina Spektor with some soul.

What continues to be your source of inspiration in your music?
MELISSA and MICHELLE:  Observing real life situations and relationships around us, sometimes Michelle or I will be in a situation and the other one of us will feel inspired to write about it. Also writing about difficult times in our own lives can be very therapeutic and cathartic. It’s helpful to turn something difficult into something beautiful, like alchemy, that’s an amazing gift that art can provide.

What do you think you have learned from your professional journey so far?
MELISSA and MICHELLE:  I think most importantly, it’s to keep going, believe in yourself, and not to pay attention to the naysayers who are operating out of fear. Always make decisions out of a place of love and be kind to yourself and others.

Are there any cool perks of where you are in your career right now?
MELISSA and MICHELLE:  The cool perk is having the privilege to work on amazing projects with talented people. Also, we love being able to choose talented people we love to work with on music videos, photo shoots, etc. We have so many talented friends and love to give other artists a chance to be creative.

Do any of your projects ever leave a lasting impression on you?
MELISSA and MICHELLE:  Absolutely, all of them do. We recently were leads in a movie with James Franco called “Blood Heist” and that was another amazing experience of being able to watch a true artist work. Also, every set or project is like a different little family, you get really close with everyone and you always keep that special experience with you. We also co-created a theatre show (with Shaheen Vaaz) called “Dirty Talk” about sexual assault on college campuses and we toured campuses doing it. It was an incredibly powerful experience.

If there were one project you would like to revisit, which would it be and why?
MELISSA and MICHELLE:  I would say we learn something valuable in every project and push ourselves to be better, I think there’s not one to revisit because each experience is valuable to learn from and then move on. We’re excited for what’s to come.

Has there been any great advice you have gotten?
MELISSA and MICHELLE:  The best advice we’ve gotten is to stick with it, keep your head down, keep going and focus on the work, on what inspires you. Treat yourself kindly through the whole journey, you’re exactly where you’re supposed to be.

What advice would you offer to other upcoming and aspiring singers/performers?
MELISSA and MICHELLE:  To keep focused on the work and getting better and to try and enjoy the journey.

What do you consider to be one of your proudest accomplishments as a singer/performer?
MELISSA and MICHELLE:  On the music side of things, I think we’re proudest of this upcoming album, we really stood up for what we believed in and worked hard to make every single song what we wanted. In terms of the performing side, the privilege to work with James Franco in “Blood Heist” and all of the fantastic people on GIRLBOSS, Kay Cannon, Britt Robertson, Ellie Reed and Johnny Simmons. We’re very proud of those accomplishments.

Do you have any other upcoming projects that you can share that fans should keep an eye out for?
MELISSA and MICHELLE:  As we mentioned before, we’re leads in the upcoming James Franco movie, “Blood Heist,” directed by Jenna Cavelle and we’re starring alongside Edy Ganem, Carlitos Olivero, Shakira Barrera and Dakota Love. There’s no release date for it yet, but there should be one soon!

At a time when women’s voices are rising to be heard and respected around the country and world, what do you recommend your fans do to lend support in that endeavor?
MELISSA and MICHELLE:  We identify as activists and feminists and are all about supporting women’s voices. We would say the bravest thing women can do right now is to unapologetically be yourself, commit to yourself, believe in yourself and your value. You are worthy and your voice is worthy of respect, do what you love and hold your power. It’s so important at a time when people are trying to disempower women, stand tall, be strong and support each other, you’ve got this! It’s ok to mess up, it’s ok to not be perfect.

What do you recommend your fans get involved with in order to further support musical artists?
MELISSA and MICHELLE:  Go out and see shows, buy songs/albums, just get out there and support art, it’s not a luxury, it’s a necessity. Art can inspire and truly help people, as it has done with us.

Where can fans find out more about you and your music?
MELISSA and MICHELLE:  They can go to macedomusic.com or any of our social media pages on Twitter are @macedomusic and our individual Twitter accounts are @MichelleMacedoM and @MelissaMacedoM

To see more of Melissa and Michelle’s fun performances, be sure to check out Season 1 of GIRLBOSS, which is available now for binge-watching on Netflix.  Also here are a few of MACEDO’s songs featured currently on YouTube:

Hallmark Renews WHEN CALLS THE HEART For Season 5

TBS Renews THE DETOUR For Season 3