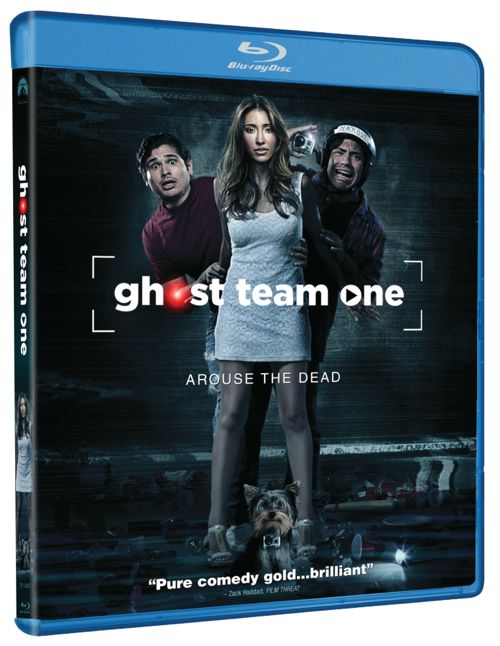 Seat42f and Paramount Home Entertainment have teamed up to give THREE lucky winners a copy of GHOST TEAM ONE on BLURAY. For a chance to win leave a comment below telling us why you want to add GHOST TEAM ONE to your BLURAY collection. Only one entry per person. Contest ends December 26th. Winners will be notified on December 27th via email so make sure to use a valid email address when you post your comment.

The outrageous and subversive horror send-up GHOST TEAM ONE will be summoned up on Blu-ray and DVD December 17, 2013 from Paramount Home Media Distribution.  Hailed as “pure comedy gold” (Film Threat) and “a film that will definitely show up on my Best Horror Film of the Year list” (Ain’t It Cool News), the cross-genre sensation has drawn raves from critics and was an official selection at the 2013 Slamdance Film Festival.

Directed by Scott Rutherford (writer on “Workaholics”) and Ben Peyser (“Sucks Less with Kevin Smith”) and featuring an outstanding ensemble cast of fresh talent including actor and comedian Carlos Santos (host of MTV Tr3s’ “Mi TRL”),  J.R. Villarreal (“Akeelah and the Bee”), Tony Cavalero (“Son of a Pitch”) and Fernanda Romero (“RPM Miami”), GHOST TEAM ONE follows two friends who are both trying to impress a girl who believes the spirit of a vengeful madam is haunting their home.  They set out to make a documentary about a murder that took place in their house decades ago and, much to their surprise, soon capture some terrifying—and uproarious—supernatural activity that leads them to believe that the ghost is not only real…she’s also into them.

The GHOST TEAM ONE Blu-ray and DVD feature spirited bonus material including deleted/extended scenes, Chuck’s Video Diary, bloopers and a behind-the-scenes featurette.  The Blu-ray available for purchase is enabled with UltraViolet, a new way to collect, access and enjoy movies.  With UltraViolet, consumers can add movies to their digital collection in the cloud, and then stream or download them – reliably and securely – to a variety of devices.