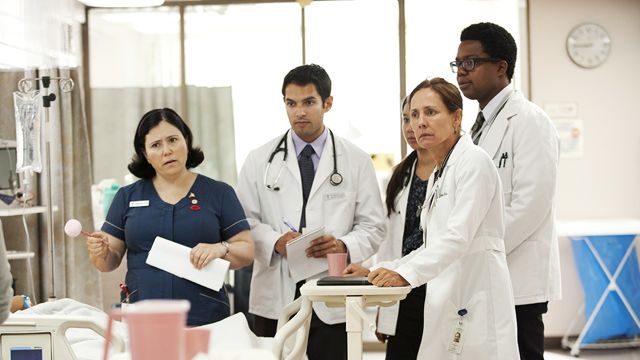 HBO’s GETTING ON, premiering this week, is a very dark comedy. So dark you might not realize you’re supposed to be laughing until late in the episode. Based on the British series of the same name, and running only six episodes (at least for now), it follows the doctors and nurses in the elderly care wing of a hospital that’s having hard times. Their jobs suck, they are forced to do things they don’t like, and they are neither the brightest nor the most compassionate people in the industry, jaded and exhausted.

This actually gives it a feel of realism. We’re used to our doctors being beautiful and energetic and our nurses being sexy and sassy on the small screen. GETTING ON actually downplays the looks of its cast. Not that anyone on the series is ugly at all, but they come across as regular people, concerned with real things. This label applies to both the hospital’s staff and its patients, though the former get much more of the focus.

As the pilot, “Born On the Fourth of July,” begins, it’s Independence Day and Doctor Jenna James (Laurie Metcalf, The Big Bang Theory, Roseanne) is stuck running the wing again. She doesn’t consider this duty part of her “real” job, but it’s been three months since the department lost its overseer, and she’s frequently been forced to pull shifts here.

Also working the floor are Nurse Dawn (Alex Borstein, Family Guy), a by-the-book suck-up and coward, new staff member Nurse DiDi (Niecy Nash, Reno 911!), who is caring and has sense, and Beverly (Telma Hopkins, Family Matters), who does not get along well with Jenna at all. By the end of the day, this beleaguered crew of four will be down to three, though that is just as depressing as everything else going on.

Yet, as sad as the lives presented are, there is something humorous behind the events of “Born On the Fourth of July.” It may be misunderstandings, or debates over meaningless things, or the way you just know things are going to get worse before they get better, but there’s a constant flow of energy that will amuse.

I credit this to the performers. Sure, the writing has to be excellent to make this all come together right, but if the actresses were dropping the ball even a little, or not so darned talented at punching up small things in sly ways, it also wouldn’t flow. A look or a mannerism has as much to do with the humor of GETTING ON as a line of dialogue does.

Not that GETTING ON is terribly complex. One might read much into it and come up with an in-depth explanation, but the surface is enough because it’s a layered, nuanced surface. The characters are weird, but familiar. It’s very accessible, and while not everyone will laugh out loud while watching it, most people should find something to connect to.

There are some poop jokes at the very beginning, if you’re into that sort of thing, which I’m not. But thankfully, the rest of the comedy tends to skew a bit smarter, including the continuing use of the fecal situation for comic effect, which goes on for quite some time, but develops in more interesting ways than first expected.

Honestly, I find it hard to pinpoint exactly what the best elements of “Born On the Fourth of July” are. But I know I liked it, and I know I want to watch more. And I also smell some Emmy bait in a short-season dramedy sure to set itself apart from the competition and showcase the amazing skills of some wonderful ladies.

GETTING ON premieres Sunday at 10 p.m. ET on HBO.