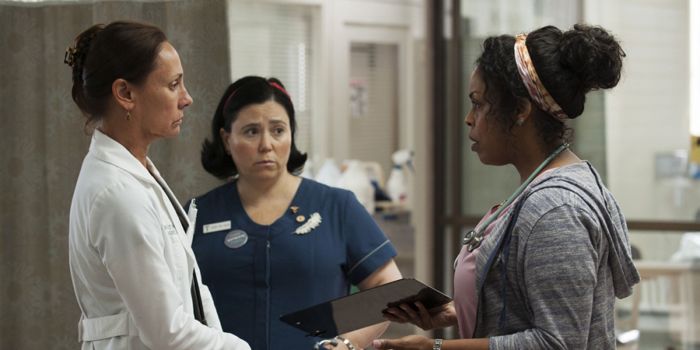 HBO’s GETTING ON is back! For those that missed the six-episode first season a year ago, feel free to jump on into season two when the premiere episode, “No Such Thing as Idealized Genitalia,” airs this weekend, no prior knowledge needed. But for fans, you’ll delight in seeing the staff of the Billy Barnes Extended Care Unit of Mt. Palms Hospital in Long Beach, California again, who are basically up to the same things they were when last seen.

Dawn Forchette (Alex Borstein) is continuing to work for Dr. Jenna James’ (Laurie Metcalf) research study. Dawn doesn’t like working for Dr. James, and why should she? Dr. James is emotionally abusive and takes advantage of Dawn whenever she can. But for Dawn, who isn’t feeling well (something explored with a very unexpected twist late in the episode, and that will extend to future installments), she’s tired of bending over backwards to fit Dr. James’ requests in with her regular work and getting absolutely no appreciation for the effort. In fact, Dr. James expresses the opposite of appreciation.

Dr. James is under a lot of stress, admittedly. She is still fighting Dr. Paul Stickley (Mark Harelik) to get her research funded, something far from a certainty in her business. She has to put up with the hospice corporate vulture she hates (Jayma Mays, Glee) trying to make inroads in the hospital (again, something that will continue throughout the season because of another beautiful twist). She is drawn into a fight with an obnoxious patient (played by a familiar face I can’t quite remember – feel free to let me know who she is in the comments) for bed space. And she has to deal with the annoyance of Nurse Patsy de la Serda’s (Mel Rodriguez) “green” program, which results in lights turning off in the bathroom after mere seconds. But does that justify her behavior towards Dawn? Nope.

Technically, GETTING ON is a comedy. The laughs come at the characters’ expense, though. Is it fun to see Dawn get dumped on my Dr. James? No, but there’s something inherently amusing in the way Borstein shows the pathos of the downtrodden character. Does one laugh at Dr. James issues in the bathroom? Of course not, but again, there are some sight gags that will elicit a smile, even as we feel sorry for her. It’s smart, slow-burn comedy.

In “No Such Thing as Idealized Genitalia,” Nurse Didi Ortley (Niecy Nash) emerges as the heart of the show. This is something she’s been seen as before, but the role is reinforced in her behavior this week. Whether it’s taking care of her family or her co-workers, whether they could actually be called friends or not, Didi is a person who has compassion for others. This, all while making next to no money, and meeting much resistance for requesting even the smallest of raises.

This hospital highlights the ridiculousness of bureaucracy and the flawed nature of human beings. It does so without judgment, reflecting familiar traits in slightly exaggerated ways. There are very few moments you’ll laugh out loud at, but you will be amused as much as depressed by the proceedings. Though a scene where the characters finally get to air some grievances will come close to getting a chuckle.

In considering quality television, GETTING ON excels. It’s an authentic piece with nuanced characters. The cast is across-the-board excellent, both the stars and the supporting players. The world is well-developed, and if anything has changed in season two, it’s that the writers know their parameters better, making for a more fully realized premise. I highly recommend checking it out.