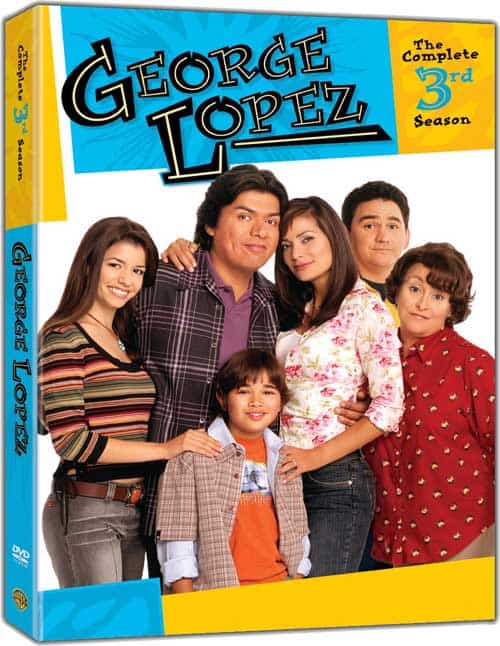 Seat42f and Warner Home Video have teamed up to give FIVE lucky winners a copy of GEORGE LOPEZ Season 3 on DVD. For a chance to win leave a comment below telling us why you want to add GEORGE LOPEZ Season 3 to your DVD collection. Only one entry per person. Contest ends July 23rd. Winners will be notified on July 24th via email so make sure to use a valid email address when you post your comment.

Get set for non-stop laughter and good times when Warner Bros. Home Entertainment (WBHE) brings the third season of the groundbreaking hit television series George Lopez to DVD July 16, 2013. Starring multi-talented entertainer, George Lopez, as the head of the delightfully hilarious Lopez household, George Lopez follows the exploits of an endearing and uproarious blue-collar Hispanic family living in the suburbs of Los Angeles.  Titled George Lopez: The Complete Third Season, this three disc set will include 28 half-hour episodes and will retail for $29.98 SRP.

George Lopez stars popular stand-up comedian George Lopez (Beverly Hills Chihuahua, Real Women Have Curves) as an assembly line worker who brings a blue-collar outlook and laughs to a white-collar job, when he’s promoted to manage a Los Angeles airplane parts factory.    Presenting a constant challenge both at work and at home is George’s tough and acerbic but loving mother Benny (Belita Moreno, Diary of a Wimpy Kid, Melrose Place). Fortunately, George’s devoted wife, Angie (Constance Marie, Switched at Birth, For Your Love), possesses the patience of a saint and copes surprisingly well with Benny’s questionable behavior and insensitive wisecracks.  George and Angie’s son Max (Luis Armand Garcia, A Day Without a Mexican) is dyslexic and a sarcastic ball of energy, while their teenage daughter, Carmen (Masiela Lusha, Clifford’s Puppy Days), struggles against her parents to assert her own independence while dealing with the tribulations of being a teenage high school girl.

In Season Three of George Lopez, George’s life hasn’t become any less complicated. Benny starts dating a younger man named Randy. George learns his father is in need of kidney transplant. Max forges his parent’s signatures to cover up that he’s failing in school, and Benny is blamed after the aviation factory George works in is vandalized. Other unexpected surprises that make this season a must-watch include a long lost sister, a trip to “the happiest place on Earth” and a guest appearance by Sandra Bullock.

“George Lopez is a gifted comedian who kept the show fresh and exciting with his unique brand of comedy. That is one of the reasons why the series was such a success,” said Rosemary Markson, WBHE Senior Vice President, TV and Special Interest Marketing. She added, “We are delighted to bring another season of this program to consumers. It’s a must-own title for anyone who enjoys well-crafted, heart-warming family comedies.”

George Lopez originally premiered on ABC in 2002 and enjoyed a successful run until 2007. During its run, George Lopez was recognized with a number of distinguished Imagen Awards in such categories as Best Primetime Comedy, Best Actor, Best Actress and Best Supporting Actress.