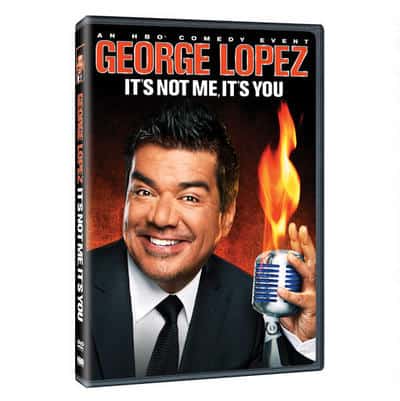 Seat42f and HBO have teamed up to give FOUR lucky winners a copy of GEORGE LOPEZ : IT’S NOT ME, IT’S YOU on DVD. For a chance to win leave a comment below telling us why you want to add GEORGE LOPEZ : IT’S NOT ME, IT’S YOU to your DVD collection. Only one entry per person. Contest ends January 15th. Winners will be notified on January 16th via email so make sure to use a valid email address when you post your comment.

George Lopez, one of the country’s most popular stand-up comics, returns to HBO® for his third solo special It’s Not Me, It’s You. The high-spirited stand-up event is presented from the famed Nokia Theater L.A. LIVE, which he has previously sold out 24 times (a record for the venue), and features Lopez in performance before a live audience. George Lopez: It’s Not Me, It’s You on DVD will arrive in stores on January 8, 2013 for the suggested retail price of $19.97 and includes a bonus behind-the-scenes feature “The Road to It’s Not Me, It’s You.”

In the all-new special,Lopez discusses the state of Latinos in the United States and covers topics such as dating and marriage, alcohol and drugs, parenting, irritating pets, Latino environmental firsts, getting old, the behavior of children today and the importance of teaching them “the hard way.” He also talks politics and reveals his thoughts on his visit to the White House.

A Los Angeles native, Lopez was the first Mexican-American to star in his own self-titled hit sitcom and talk show. He’s hosted the Latin Emmy® Awards twice, co-hosted the Emmy® Awards, received Grammy® nominations for his CDs “Team Leader” and “El Mas Chignon” and wrote the best-selling autobiography “Why You Crying?.” His HBO credits include 2009’s Tall, Dark & Chicano, which was the highest rated stand-up special on the network in five years; America’s Mexican, his first live HBO special; Comic Relief™ 2006 and the HBO Films® presentation Real Women Have Curves. Feature film credits include Beverly Hills Chihuahua, Marmaduke, Rio and The Smurfs. Lopez has also received numerous honors for his talents and charitable endeavors. Most recently, he hosted the provocative broadcast network dating series Take Me Out.