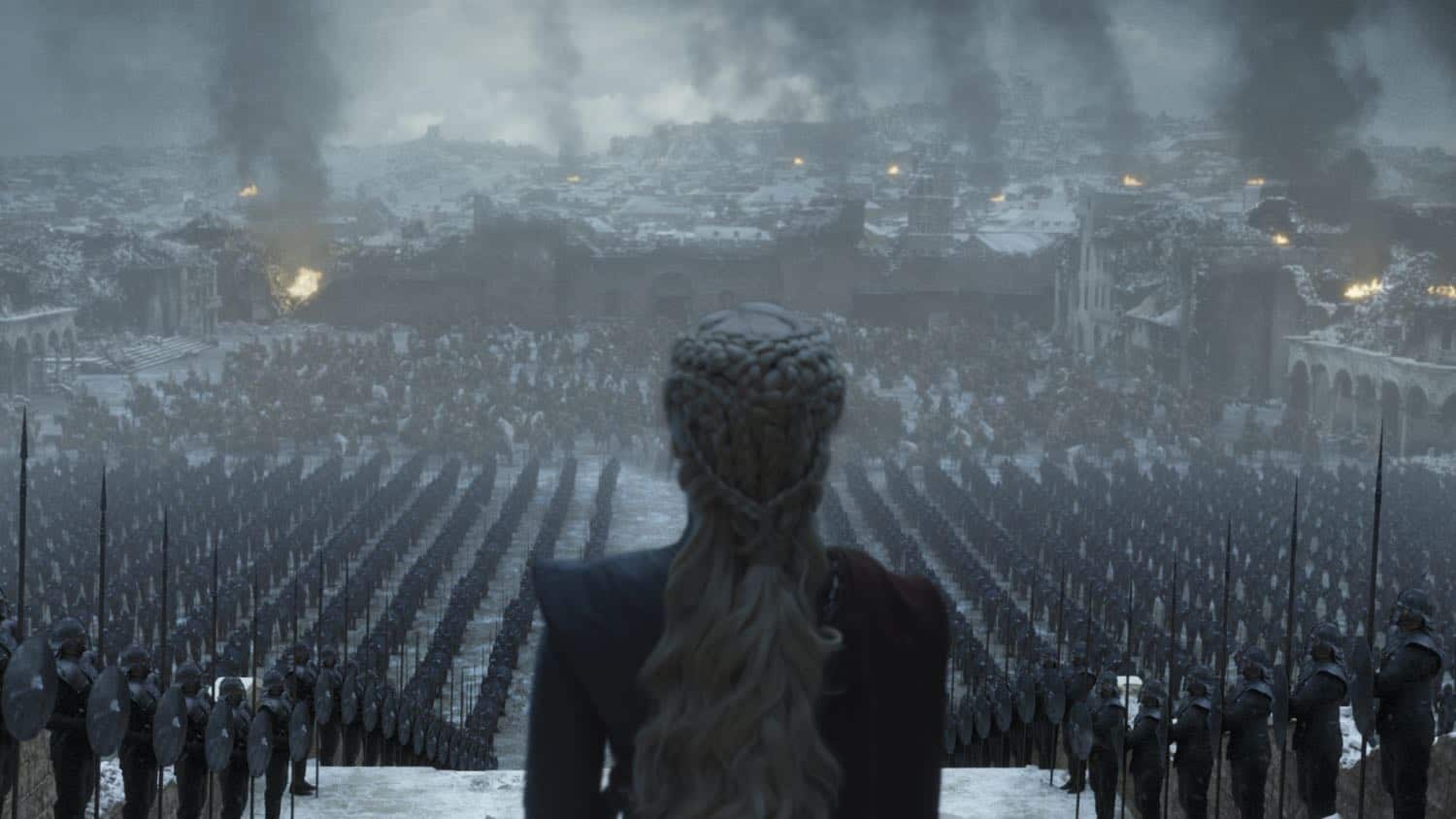 In its series finale, GAME OF THRONES served up a bleak reminder that no one wins in the game of thrones — that there are only survivors. Yet against all reason, as fans, viewers were hopeful that the series ending would deliver one thing: a happy ending. Alas, the ending that was offered in the GAME OF THRONES finale cannot be described as that. It was not a happy ending.  It was a tragedy.  It was perhaps foolish and naive to believe that a show, that had consistently delivered tragedy upon tragedy among its constant churning of political alliances and dire prophecies, that there was any room for happiness.

In a world of premised upon arranged-marriages and strategic alliances, there was literally no place for love. Rather a “happy ending” in the GAME OF THRONES world was simply regaining a power balance and perhaps to dream of future peaceful transitions of power. GAME OF THRONES was never about a search for love.  Yet, for the audience and fans of the show, a happy ending traditionally means the beloved characters would indeed find love.

As WYNONNA EARP creator and showrunner Emily Andras (@emtothea) insightfully noted after watching finale, “Love is the only truth. Our greatest stories, from Christ to Romeo & Juliet; Star Wars to Harry Potter, reflect that. If a story ends without love, how can it truly represent what it is to be human? So at this end, I say, with wistful gratitude: close, but . . . loveless.”

Similarly, writer Jordan Rudner (@jrud) commented after seeing the finale, “Something that struck me about the Game of Thrones finale: the complete absence of intimate relationships of any kind for nearly all the main characters as the series ends. It made the episode feel almost sterile – and lonely.”

It was a bit of dark foreshadowing when, in Season 1, Grand Maester Aemon (Peter Vaughn) had told Jon Snow (Kit Harrington), “Did you ever wonder why the men of the Night’s Watch take no wives and father no children? So they will not love —  for love is the bane of honor, the death of duty.”  It was meant to be a pledge to keep the men of the Night’s Watch dedicated to protecting the realm of men from the Night King and the horde of the undead — to be free from distractions and romantic entanglements, to have no loyalty to any one person, just a solemn oath to swear fealty to the sacred duty, and not to love.

So when Jon shared this memory with Tyrion (Peter Dinklage) in the finale, Jon quietly acknowledged, “Love is the death of duty.”  To which Tyrion resignedly replied, “Duty is the death of love.”  Jon was admitting that his love of Daenerys had clouded his judgment and allowed him to bend the knee to a woman determined to conquer the world by force and rule by fear, heedless of the cost of human life in the process. Tyrion’s reply reminded Jon that he had a duty to protect all men regardless of his love for Daenerys. The weight of this responsibility lay a heavy burden on both of them as they equally had been instrumental in assisting Daenerys in her savage quest to rule the Seven Kingdoms. Each had succumbed to their personal motivations and shirked their duty to protect all men for too long and they could no longer let their love for Daenerys be the ruin, destruction, and death of every castle and keep in Westeros. There were simply too many lives at risk, lives that would soon be lost, and the destruction of an entire civilization would forever hang on their shoulders.

As Jon wrestled with the quandary of duty versus his love, Tyrion hoped that his reminder would not only sway Jon, but would convince Jon to do the one thing his head and heart were at war over: to kill his queen and the woman he loved.  It was for the good of the realm and the good of every living person in Westeros. Daenerys in her blood-lust and quest to rule everything and everyone could no longer be trusted to let people live — not the innocent, not those who surrendered, and not those who were only interested in preserving life, such as Varys.  Daenerys’ birthright was not only to conquer and rule, but to slay anyone in her way.  Just like the Night King, Daenerys believed to her core that killing everyone who did not offer strict abeyance to her deserved to die.  In the end, Jon conscience demanded that he do his duty to free and protect them all from a tyrannical, blood-thirsty ruler who no longer viewed men, women, and children as human beings. It broke his heart and shattered it into a million little pieces. But it was a pain that Jon had endured before when he had abandoned Ygritte (Rose Leslie) and her resulting death during an attack on Castle Black.

GAME OF THRONES had always offered great love stories throughout its eight season journey. Time and time again, viewers fell in love, just as the characters did. First there was Danereys and Khal Drogo (Jason Momoa), Robb (Richard Madden) and Talisa (Oona Castilla Chaplin), Myrcella (Neil Tiger Free) and Trystane (Toby Sebastian), Tyrion and Shae (Sibel Kekill), Arya (Maisie Williams) and Gendry (Joe Demise), Sam (John Bradley) and Gilly (Hannah Murray), Brienne (Gwendoline Christie) and Jaime (Nikolaj Coster-Waldau), Jon and Ygritte, Sansa (Sophie Turner) and Theon (Alfie Allen), Grey Worm (Jacob Anderson) and Missandei (Nathalie Emmanuel), Rhaegar (Wilf Scolding) and Lyanna (Aisling Franciosi), and finally Jon and Deanerys.  The show did not spare in the romance department. It was just that the majority of its romances ended so tragically.  Khal Drogo was poisoned, Robb and Talisa slaughtered at the Red Wedding, Myrcella poisoned, Shae strangled, Ygritte killed by arrow, Theon died defending Bran from the Night King, Missandei beheaded, Rhaegar died in battle and Lyanna died in childbirth, and Daenerys ultimately stabbed in the heart by Jon.  For those who lived, Tyrion was made Hand of the King for Bran over his protests, Arya forsake a lifetime by Gendry’s side to sail beyond Westeros, Brienne was left in charge of the King’s Guard after Jaime abandoned her to die in the rubble of King’s Landing with Cersei, Sansa was crowned Queen of the North, Grey Worm sailed with the Unsullied for Naath in honor of Missandei, and Jon was sent back to serve out the remainder of his life with the Night’s Watch and last seen trekking beyond the Wall northward with the surviving Wildings.

Some may believe that the fact that so many of the Starks ended up surviving and thriving — not only delivering vengeance upon their enemies, but also to end up ruling the North and the remaining Six Kingdoms, along with Gendy getting Storm’s End, Bronn (Jerome Flynn) getting High Garden, Brienne and Podrick (Daniel Portman) admitted to Knighthood and in the King’s Guard, while Sam serves as Grand Maester with Gilly by his side, and Jon free to return to to land beyond the wall, as a happy ending.  But is it really? Perhaps in the harsh world of castles, knights, dragons, and its ruthless “game of thrones,” it is.  But did any of them grow up dreaming of anything more than what they ended up with? Definitely not.  Each had in fact achieved a life that was significantly better off than before; and even those, who were slain prematurely ultimately, lived a life that they were grateful for.

GAME OF THRONES never shied away from the harsh existence that its characters were born into, and yet it rewarded each in unique ways.  It is just that — as fans — viewers were hoping and dreaming of a “happy ending” where love won. Was it too much to hope that each of the romantic couples could find a way to carve out a corner of a kingdom in Westeros and live out their lives happy, healthy and blissfully in love?

Alas, to discover love, in GAME OF THRONES, is to know that all love is lost in the end— whether claimed by old age, by disease, by wrath or by unfortunate and tragic circumstances.  It is perhaps a greater gift to have “loved and lost” than to have never loved at all.  Even Sansa got a small taste of love in her feelings for Theon, which was evident during their warm reunion at Winterfell and her subsequent raw weeping over his funeral pyre.  As for Tyrion, he was cursed with always falling in love with women who could never love him back, but I imagine he too was grateful for the chance to love in his lifetime.  The same with Jaime, who probably did not truly deserve Brienne’s love, but who was a better man for it.  Brienne also had earned a chance at love and was quick to claim it when offered, as one night of heaven is better than an eternity without one second of love.

As for the rest who survived, their stories are not over yet. Who is to say that they did not ultimately find love again?  That is the amazing thing about life, happiness usually comes around again if one’s heart is open to it. Maybe Gendry is out there rowing in search of Arya on the high seas, or maybe Arya returns to Storm’s End settle after her adventures are done.  Maybe Tyrion finds love again as Hand to the King or he and his former wife Sansa decide to give their arranged-marriage another try upon discovering their mutual admiration and affection for each other.  Maybe Brienne finds another knight worthy of her time and company in bed. And surely, Bronn and Podrick will pursue love in their lives beyond the temporary companionship offered in the brothels.  Every one of them deserves to be happy and how are we to know that they did not pursue happiness as tenaciously as they pursued their own survival.  After all, they survived the Great War, the war between the Living and the Dead, and dodged a fiery death at the hands of Daenerys’ dragons, which was sure too come if any of them were deemed traitors to the queen.

Was GAME OF THRONES a tale of “love lost” or was it a tale of great love that we were privileged to witness and share in for eight glorious seasons?  It is all a matter of how you look at it.  The series finale was either a sad ending without the root-worthy relationships alive to celebrate, or it was a magnificent ending for the survivors who will undoubtedly find a reason to love again, never forgetting the love that opened their hearts, has opened their eyes to the possibilities that life continues to offer them.

Love may have lost, but we should remain hopeful that it will be discovered again. That is the cycle and promise of life: love will win in the end.