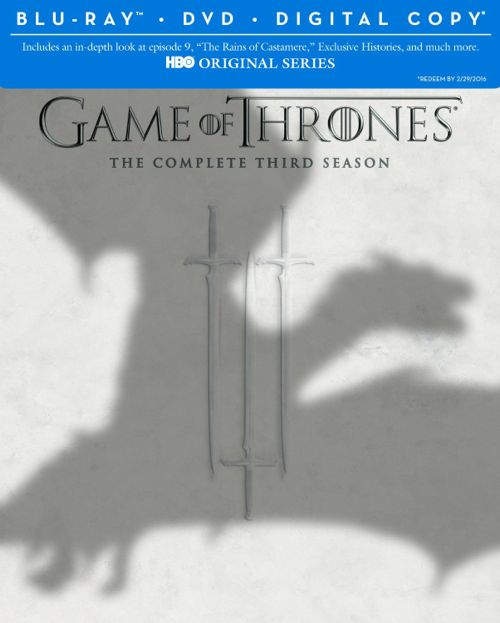 Seat42f and HBO Home Entertainment have teamed up to give THREE lucky winners a copy of GAME OF THRONES Season 3 on Blu-ray/DVD Combo Pack. For a chance to win leave a comment below telling us why you want to add GAME OF THRONES Season 3 to your Blu-ray/DVD collection. Only one entry per person. Contest ends March 11th. Winners will be notified on March 12th via email so make sure to use a valid email address when you post your comment.

Featuring one of the most shocking episodes of all time, the third season of the HBO® series Game of Thrones captured headlines and captivated audiences with its gruesome battles and political intrigue. The season was “bigger than ever” (Entertainment Weekly) – and the most nominated series at the 2013 Emmy® Awards. Bring home a piece of TV history when Game of Thrones: The Complete Third Season makes its highly anticipated debut on Blu-ray with HBO Select ($79.98), DVD ($59.99) and Digital Download on February 18, 2014. Game of Thrones is consistently the hottest BD/DVD title on the home entertainment charts, with seasons one and two currently ranked as the fastest-selling TV-on-BD releases of all time. The BD and DVD sets are packed with special features that further explore the characters, families and politics that populate the richly drawn world of Westeros.

In Season 3, the battling families of the Seven Kingdoms continue to fight for power as bonds are strained, loyalties are tested and cruel fates are met. The Lannisters barely hold on to power after a savage naval onslaught from Stannis Baratheon, while stirrings in the North threaten to alter the overall balance of power. Robb Stark, King in the North, faces major calamity in his efforts to build on his victories over the Lannisters, and beyond the Wall, Mance Rayder and his huge army of wildlings continue their inexorable march south. Across the Narrow Sea, Daenerys Targaryen – reunited with her three fast-maturing dragons – attempts to raise an army to sail with her from Essos, in hopes of eventually claiming the Iron Throne for herself.

Bonus Material
The Blu-ray with HBO Select and DVD bonus materials in Game of Thrones: The Complete Third Season contain multiple featurettes, extended and deleted scenes, and audio commentaries. Additional features on the BD release include interactive guides, illustrated histories, and an extensive feature on the creation of “The Rains of Castamere,” containing nearly two hours of never-before-seen material, as well as new looks at the infamous “Red Wedding.”

ONCE UPON A TIME Episode 3.12 Photos New York City Serenade

SCANDAL Episode 3.12 Photos We Do Not Touch the First Ladies