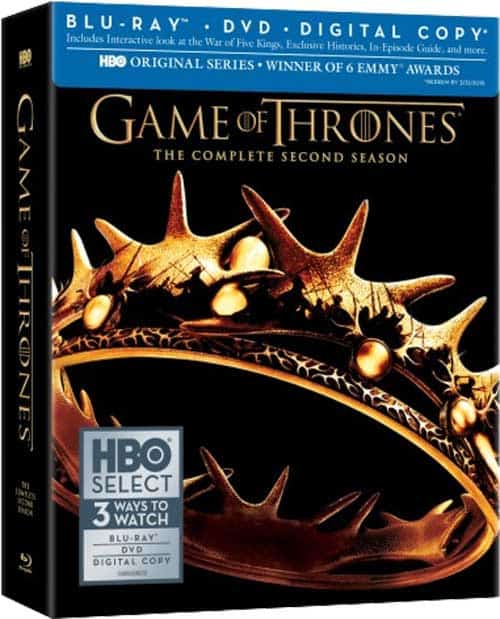 The second season of the “thrilling” (Entertainment Weekly) and “magnificent” (Wall Street Journal) HBO series Game of Thrones makes its highly-anticipated Blu-ray with HBO Select, DVD and Digital Download debut on February 19, 2013. Based on George R.R. Martin’s best-selling series A Song of Ice and Fire, the first season of the epic series became the home entertainment industry’s best-selling television title for 2012 as well as the fastest selling TV on Blu-ray title of all time. Game of Thrones: The Complete Second Season five-disc Blu-ray with HBO Select ($79.98) and DVD ($59.99) sets contain a monumental array of exclusive bonus materials and interactive features that will thrill fans of the series and new viewers alike.

The second season of Game of Thrones was nominated for 11 2012 Emmy® awards (including Outstanding Drama Series) winning six. In this season, the coveted Iron Throne is occupied by cruel young Joffrey Baratheon, counseled by his conniving mother Cersei and his uncle Tyrion, who has been appointed Hand of the King. However, the Lannister hold on the Throne is under assault on many fronts. Robb Stark seeks autonomy in the North and has taken Cersei’s brother Jaime prisoner in battle. Daenerys Targaryen looks to shore up her depleted power in the East with her three newborn dragons. Stannis Baratheon rejects Joffrey’s legitimacy and aligns with a powerful priestess to raise a naval attack while his brother Renly has maintained his own claim since fleeing King’s Landing. North of the Wall a new leader is rising among the wildlings adding new perils for Jon Snow and the Night’s Watch.

Bonus Material
The Blu-ray with HBO Select and DVD bonus materials included in Game of Thrones: The Complete Second Season contains extensive never-before-seen features. Highlights include a comprehensive “making of” the penultimate episode “Blackwater,” an in-depth look into the War of the Five Kings and meticulous histories and character profiles which explore the amazing production elements that went into making the second season so compelling. Content includes:

Blu-ray with HBO Select – includes all DVD features plus: