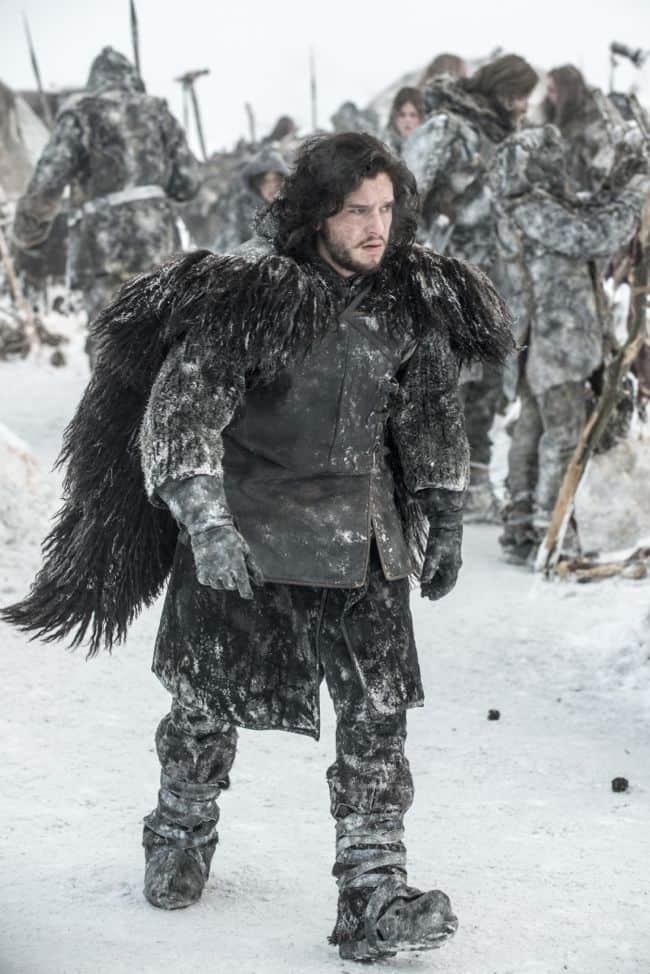 There are many fans of HBO’s GAME OF THRONES out there, eagerly awaiting the start of the series’ third season this weekend. Having viewed the premiere, “Valar Dohaeris, I can report that it is back in the fine form we are accustomed to seeing, and those holding their breaths can finally let them out. Without spoiling anything important, here are my thoughts on the latest installment.

“Valar Dohaeris” is very accessible. I really wanted to refresh my memory with a reviewing of season two’s finale, remembering how dense season one was, and having re-watched the entire first season to prepare for the second, but didn’t have time. However, this episode, without quite recapping, doesn’t take long to get you back up to speed. There are enough references and callbacks to last year’s finale to connect the threads, yet not so much that they slow down the pacing of the return. This is much appreciated.

There isn’t a sense of urgency in this week’s episode. It takes its time, showing us one or two characters at a time, and very few get a second glimpse. In this way, we get to check in, be reminded of the trajectories, delight in a few extended dialogue exchanges, and don’t have to struggle to keep up. There’s a whole season ahead of us, and “Valar Dohaeris” doesn’t push anything too big forward, letting fans get back into the swing of things before trying to drop a huge shocker.

Among those mentioned exchanges, one of the best is between Tyrion (Peter Dinklage) and Tywin (Charles Dance). The relationship between these two is definitely one of my favorite parts of GAME OF THRONES. We’re familiar with their past beef, and Tywin’s ongoing disappointment in his halfling son. The scene between them this week is not exactly a rehash of their previous conflict, but it definitely lets us know where they stand now, and how things may or may not move forward between them.

Dinklage and Dance slay this bit. Dinklage’s awards for the role are well deserved, and I would argue that he comes across as the most intelligent and compassionate character on the series. This shines through here, in stark contrast to Dance’s icy father, likely a deliberate choice on Dance’s part that serves the chemistry well. I do think, at some point, things will come to a head between the two. But it’s interesting to see Dinklage mix a need to win his father’s approval with a strong spirit that is willing to stand up to Dad, played with masterful nuance.

Tyrion also gets a tense scene with Cersei (Lena Headey). The siblings have a complicated relationship, to say the least, and the events of last year’s finale have left them on shaky ground with one another. “Valar Dohaeris” addresses this, and reminds me that Headey may be one of the more underrated performers on GAME OF THRONES.

The MVP of this episode, for once, may not be Dinklage, though, instead going to Natalie Dormer. Margaery Tyrell has little to do in the second season, but that will definitely not be the case in the near future. She immediately establishes herself as a very familiar political sort, and her public persona is deliciously crafted. I cannot wait for a true power struggle between her and Cersei, as Joffrey (Jack Gleeson) now has two women who seek to manipulate him for their own purposes and gains.

I also like the introduction of Mance Rayder (Ciaran Hinds, Political Animals, Munich), the King Behind the Wall. We don’t know a lot about him yet, but his early interaction with Jon Snow (Kit Harington) is layered and intriguing, setting up yet another ruler in a land already crowded with them. The casting choice here is inspired.

Among the other treats of the episode, we see more of the aftermath of the loss in Stannis’s (Stephen Dillane) camp, Robb’s (Richard Madden) anger at his mother, Catelyn (Michelle Fairley), is unabated, Daenerys (Emilia Clarke) has at least three tantalizing bits, Ghost saves a life, and Littlefinger (Aidan Gillen) makes an uncharacteristic generous offer (or does he?).

Sadly, the slower pace and lingering conversations means that not every fan favorite character shows up in “Valar Dohaeris.” Several of the most central players are completely absent, which leaves one very much wanting more at the end of the hour. However, this is understandable with such a large cast, not unprecedented in past entries, and it’s not like any minute within the episode is wasted, so it’s more a testament to how beloved these people have become, and how much we want to see them, rather than a complaint about the storytelling.

The effects are also quite excellent this week. From a creepy little girl who is more than she appears, to the fast-growing dragons, there are quite a few CGI elements present, all seamlessly incorporated into the fabric of the show. Clearly, much care and expense has gone into making these feel like everything else in this world, and they are remarkable for how well they blend with the actors and scenery, rather than stick out like a sore thumb.

Overall, I am left incredibly satisfied with the premiere, and stoked to watch more episodes. GAME OF THRONES’ third season airs Sundays at 9 p.m. ET on HBO beginning this week.