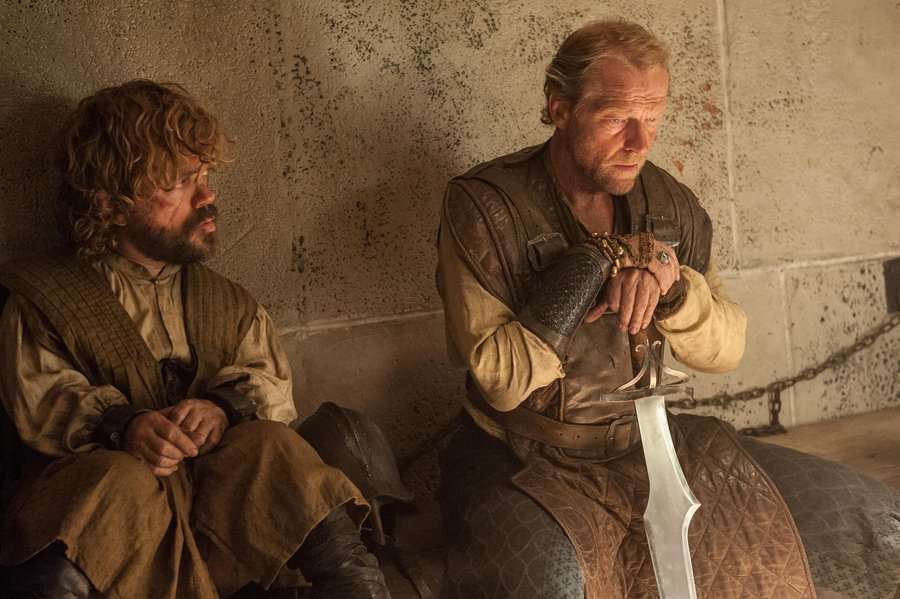 This week’s GAME OF THRONES gives us “The Gift” of great story, albeit one that is leaving the book series behind quite rapidly. Right now, there aren’t many big offensives sweeping the Seven Kingdoms, nor armies clashing on the field of battle. The characters are all mainly concerned with what is happening in their own locale. But this is important, resolving a number of smaller plots before the tale goes big picture again, as must inevitably happen.

Let’s start with, in my opinion, the most affecting thread this week, which involves Sansa (Sophie Turner) asking Theon (Alfie Allen) for help. Viewers may feel sympathy for Theon last week when he cries while he watches Sansa be assaulted, though he frustratingly does not act. When Sansa reminds him who he is and begs him to signal for help, he agrees, but quickly betrays her to Ramsay (Iwan Rheon).

Theon is truly Reek now, too terrified of Ramsay to act. Those tears may have been sympathy, but they were not a sign that he would turn on his master. As Theon tells Sansa, there are worse things that being killed and Theon has lived through them. Compared to his existence a year or two ago, Theon is relatively comfortable now. He doesn’t want to risk going back to the worse.

So how can Sansa escape? Brienne (Gwendoline Christie) remains outside of Winterfell, waiting for a sign that won’t be coming. Theon is Sansa’s only hope that she knows of, no one else being granted access to visit her locked room besides Ramsay himself, and Theon no longer seems a viable option. Sansa has shown more of a spine this season, and her grabbing the corkscrew in “The Gift” might prove she’s willing to take matters into her own hands. Not well experienced, though, can she be successful with such a venture?

Speaking of strong women, Tyene Sand (Rosabell Laurenti Sellers, Mia and Me) taunts Bronn (Jerome Flynn) through the bars of their respective prisons. Tyene reveals how dangerous she is when her scratch almost kills Bronn. But she’s not cruel enough to let him die, so I can’t hate her, at least not yet. GAME OF THRONES hasn’t given us enough of the Sand Snakes yet to really judge them, but this interaction is a fun, tense scene that makes for good entertainment.

While Tyene and Sansa display their resolve, Cersei (Lena Headey) does the opposite. She thinks she is at the top of her game, reveling in the imprisonment of Margaery (Natalie Dormer) and rubbing the victory in the young queen’s face. (I believe Cersei is sincere about her devotion to Tommen (Dean Charles-Chapman) but not in her promise to help his wife.) However, that leaves Cersei vulnerable, too pleased with herself to watch her back. And so, as has been anticipated by fans for weeks, “The Gift” finds the High Sparrow (Jonathan Pryce) locking Cersei herself up by the end of the hour.

The High Sparrow has quickly proven to be a very dangerous man. He’s not mean, but he has strong opinions and beliefs and lives by them fully. If he could be persuaded to compromise by anyone, Olenna (Diana Rigg) would have been the one to do it, but he remains completely unmoved by her pleas, logic, and threats alike. Being so rigid means the High Sparrow will give no credence to anyone’s advice but his own, and that means, righteous or not, he’s an enemy that cannot be reasoned with.

At the Wall, Jon Snow (Kit Harington) leaves, almost as stubborn in his mission, not convinced by the likes of his First Ranger and others to change course on the Wildlings. To be fair, Jon is in the right, but being in the right doesn’t help Samwell (John Bradley), who struggles to protect Gilly (Hannah Murray) from his own black brothers when he doesn’t have many friends left around to help him. Might it be time for Sam to break his vows, and could Jon ever forgive such an action, no matter how true Sam’s intentions, when the punishment for such is death?

These are just some of the plots in “The Gift,” as GAME OF THRONES has a lot of moving parts at all times. Other highlights of the hour include Sam’s touching eulogy for the departed Maester Aemon (Peter Vaughan), Tyrion (Peter Dinklage) convincing someone to buy him, Jorah (Iain Glen) fighting for the attention of Daenerys (Emilie Clarke), Daario (Michiel Huisman) pointing out to Daenerys that she’s the only one in Mereen not free, and Stannis (Stephen Dillane) firmly shutting down Melisandre’s (Carice van Houten) suggestion that he sacrifice his daughter. There’s a lot going on, and as usual, it’s quite good.

My only complaint, and this is an ongoing one, is that GAME OF THRONES starts off very faithful to the books, and now has been completely disregarding them. It’s something I’ve decided I have to let go, taking the television show completely on its own from this point forward. There are likely to still be some similarities between the two, but now the differences vastly outnumber those. I still feel betrayed by those making the show, since this does not seem to be their game plan at the beginning, but I do still think the TV program is excellent.

GAME OF THRONES airs Sundays at 9 p.m. ET on HBO.