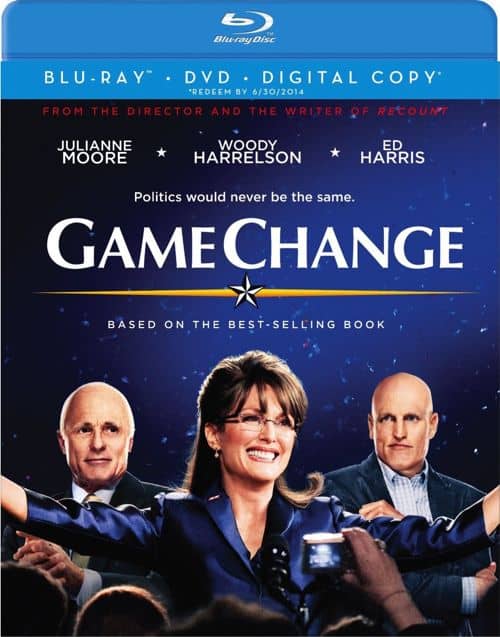 Seat42f and HBO have teamed up to give FOUR lucky winners a copy of GAME CHANGE on BLURAY. For a chance to win leave a comment below telling us why you want to add GAME CHANGE to your BLURAY collection. Only one entry per person. Contest ends January 15th. Winners will be notified on January 16th via email so make sure to use a valid email address when you post your comment.

Featuring an all-star cast lead by Academy Award® nominees Julianne Moore, Woody Harrelson and Ed Harris, Game Change revisits a defining moment in U.S. politics with a searing, behind-the scenes look at John McCain’s beleaguered 2008 presidential campaign – from the decision to select Alaska Governor Sarah Palin as a running mate to the ticket’s ultimate defeat in the general elections. Game Change on Blu-ray with HBO Select* (Blu-ray, DVD & Digital Copy, $24.99), DVD ($19.97) and Digital Download releases on January 8, 2013. The Blu-ray with HBO Select and DVD copies include bonus materials that explore the reality of “creating a candidate” and the phenomenon of the book on which the film is based.

Based on the best-selling book of the same name, the film examines the chain of events that determines the leadership of the country, ultimately offering a unique glimpse into the inner workings of how we choose our leaders. It pulls back the curtain on the intense human drama surrounding the McCain team, the critical decisions made behind closed doors and how the choice was made to bring Palin on the ticket.