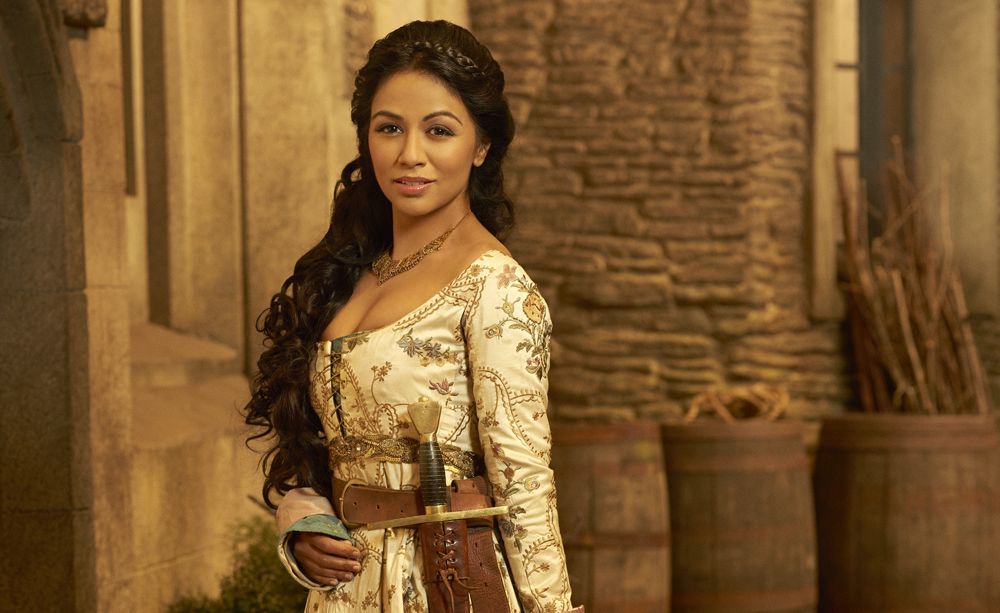 Reminiscent of a Monty Python/Princess Bride mash-up, GALAVANT has wooed fans with its off-the-cuff fantasy tale of a reluctant hero by the name of Galavant (Joshua Sasse) pushed into saving damsels and kingdoms.  As the show nears the end of its second season, the show with its infectious energy has earned a spot in the hearts of those who enjoy light-hearted drama with a dash of humor and song mixed in. Portraying a princess like no other, actress Karen David is having the time of her life portraying Princess Isabella Maria Lucia Elizabetta of Valencia on ABC’s GALAVANT.  In an exclusive interview, Karen David talks about the fun she is having and whether the path to true love still lies within the grasp of Princess Isabella and Galavant despite the many obstacles thrown their way.What initially drew you to GALAVANT?KAREN:  It’s the people involved with it, like Dan Fogelman, Alan Menken, John Hoberg, Kat Likkel and the rest of the team.  They just have that magic touch.  At the time we were doing the pilot, it was just something I had never seen done before — and that was not knowing what was to come — just being able to sing and act and dance and be silly and funny with all these talented actors, it was just immediately attractive.  Having portrayed Isabella for a couple of seasons now, what do you really admire about her?KAREN:   I love that Izzy is very much an atypical princess. She is not something that is unattainable or unapproachable.  She is very much a people’s princess and she has the biggest heart.  She is also so feisty and a bit of a spitfire.  I love that she seems to always be the frustrated character on the show.  She always feels like she has to put things right and she has the weight of the world on her shoulders.  In Season 1, it was about trying to find Galavant and bringing him and the Jewel of Valencia back to Richard (Timothy Omundson) in order to save the lives of her parents and the kingdom of Valencia; and while she has that in forefront of her mind in Season 2, it also about finding the way back to the one she loves:  Galavant — who I am pretty sure has been the only love of her life.  But for now, Prince Harry of Hortensia is indeed trouble.  And I just love the fact we get to see different sides of Izzy.  She’s gone from being the heart-broken and depressed princess to falling under an evil spell and now having to find the strength and courage on her own without Galavant.  She is very much on her own and she is trying to strategize and lead Hortensia into war and hope that they will all survive it and that she will come away regaining the throne of Valencia for her parents.  It is a helluva lot for right now.  But most of what I love about her is that she has this huge heart and at the end of the day she is just like any other girl who has fallen deeply in love with someone she loves.At this point it seems like Isabella and Galavant have such a star-crossed love and are at such different places in their journeys.  Is there hope for their relationship?  Is that what the show is working towards?KAREN:  [Laughs] What is that Shakespeare quote? “The course of true love never runs smooth.”  That is certainly the case of Galabella.  What I love about the show is that it pokes fun at the whole fairytale genre.  But at the same time, what I love about Galavant and Isabella’s relationship is that is very realistic.  It makes it more like a fairytale because it is not fairytale like in the sense is it as a really clear picture of how two people from totally opposite worlds have come together, got to know each other, know every flaw about each other and embrace the good parts of each other.  There is just something between them that they connect with and ardently love each other.  When you first heard “Love Is Strange” in Season 1 as a wedding song, that was perfect because love is not perfect and there are going to be days when you want to strangle each other and you are not going to see eye to eye and you’re going to have to pick up dirty laundry and socks scattered into the corner — and that’s love.  This season, after introducing “World’s Best Kiss” and having the situation which we can all relate — where we are being apart from the one we love or having long-distance relationships, that you just wish and dream and miss each other so much — and this is the height of Galavant and Isabella being in love and they are obsessed that the kiss might not have been good.  Things are perfectly imperfect between these two, so why would their journey be any different?  Should it be easy and simple? No, that would be bloody boring.  It would be way too easy.  So I love that.  I know it is frustrating for the viewers to watch — and it is for all of us, trust me — their love and commitment to each other is going to be tested.  But you know what?  It is good for them because if they can get through all that has happened, then there is truly nothing these two won’t do to find their way to each other.  That says a lot.  That final scene in episode 208, when Richard and Galavant mount their horses and they say, “For love!” and the music swells up, it just gives me goosebumps because Isabella’s hero is finally on the way to go and be with her.

Another endearing moment in the show I thought was between Galavant and his father in episode 206 and he looks over at Galavant and finally gives his blessing and says, “Go rescue your princess. You’re doing the right thing. Go rescue her and marry her and be the husband to her that she deserves.”  Even though Isabella doesn’t know any of this, to me watching it, it just makes things even more hopeful.  Wouldn’t it be wonderful for them to have this fairytale happily-ever-after?  It would be nice for them, especially after what they have been through.  It would nice to see them reunite and be let be.  Galavant will apologize profusely to Izzy and proclaim that he loves her ardently and that she is the love of his life.  It would be good to see them together and being happy.With only 2 more episodes this season, do you think the show will give fans a happy ending or will it leave them hanging until next season?KAREN:  [Laughs] I can’t say too much because that would ruin everything!  Our showrunners are so funny and very cheeky.  That’s why you have the show that you have. I should say they are going to tease everyone a little bit and they are going to enjoy every minute of it.  I know last year are fans were bummed having to wait a whole year to see what happens because there were so many cliffhangers.  I know our showrunners wanted to give something back to the fans so I think there is going to be a bit of something for everyone.  I think everyone will be happy with what they see.  But, at the same time, they left storylines open.  Looking at the finale, what can you tease to get the fans excited?KAREN:  Grab the tissues.  Definitely grab the tissues.  You are going to laugh out loud, as usual.  You are going to sing along.  Your heart is going to be so warm and fuzzy, and at the same time, it is going to be very bittersweet too.  So you’d better grab the tissues as there might be some teary moments. I think it is so emotional for all of us because it has been such a journey.  If the fans could only see behind the scenes and how much fun we are having.  We are having the time of our lives.  Shows like this don’t happen every day.  We hope we will go for more seasons, but we don’t know yet.  But what matters most is that the fans enjoy the show.  Long may it continue, because it is such a wonderful show.To see where the Season 2 finale leaves the star-crossed lovers, be sure to tune in for the final two episodes of GALAVANT on Sunday, January 31st at 8:00 p.m. on ABC.