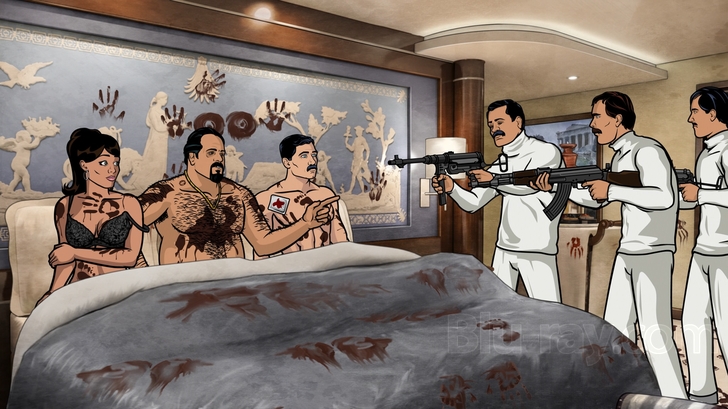 FXX will host a Season 1 marathon of the hit animated comedy Archer on Saturday, August 15th from 9 PM – 2 AM. With Archer set to return for its seventh season next year, join Sterling Archer and his fellow agents for an uninterrupted look back at the season that started it all:

Archer is an animated, half-hour comedy that revolves around an international spy agency and the lives of its employees. Although their work of espionage, reconnaissance missions, wiretapping and undercover surveillance is daunting and dangerous, every covert operation and global crisis is actually just another excuse for the staff to undermine, sabotage and betray each other for personal gain.

The Archer Season 1 Marathon will feature the following episodes:

9:00pm            Episode 1        Mole Hunt
Archer goes to great lengths to cover up discrepancies in his expense account as he attempts to access the agency’s mainframe computer.  Cyril and Lana’s Friday night dinner date is interrupted by work.

9:30pm            Episode 2        Training Day
Lana’s residual lust for Archer prompts Malory to promote Cyril to field agent. Archer then trains his new competition as only he can, whilst Malory frets over her own past and her son’s future.

10:00pm          Episode 4        Diversity Hire
A new field agent makes a splash, but Archer and Lana suspect there may be something all too perfect about their new diversity hire.

10:30pm          Episode 3        Killing Utne
Malory hosts a dinner party for the UN intelligence chairman, Torvald Utne, in an effort to get a new weapons contract. Unfortunately, a group of rival assassins have targeted Mr. Utne for elimination.

11:00pm          Episode 5        Honeypot
Malory’s career is threatened when a sensitive videotape falls into the hands of a rogue (and roguish) Cuban agent, so she calls on Archer’s expertise in seduction to turn the tables on her blackmailer.

11:30pm          Episode 6        Skorpio
Archer must rescue Lana from the clutches of Skorpio, the infamous arms dealer. Meanwhile, Cyril fears not only for his girlfriend’s life, but her succumbing to the seductive nature of Archer’s heroics.

12:00am          Episode 7        Skytanic
When a bomb threat jeopardizes the maiden voyage of the luxury airship Excelsior, Archer and the crew must battle the clock (and each other) to avert disaster.

12:30am          Episode 8        Rock, The
After the spy agency loses yet another lucrative contract to rival agency ODIN, Malory assigns Archer and Lana to embarrass ODIN by stealing a priceless diamond from their biggest client.

1:30am            Episode 10      Dial M for Mother
Questions about the identity of Archer’s real father lead him into a perilous trap… and an explosive confrontation with Malory.