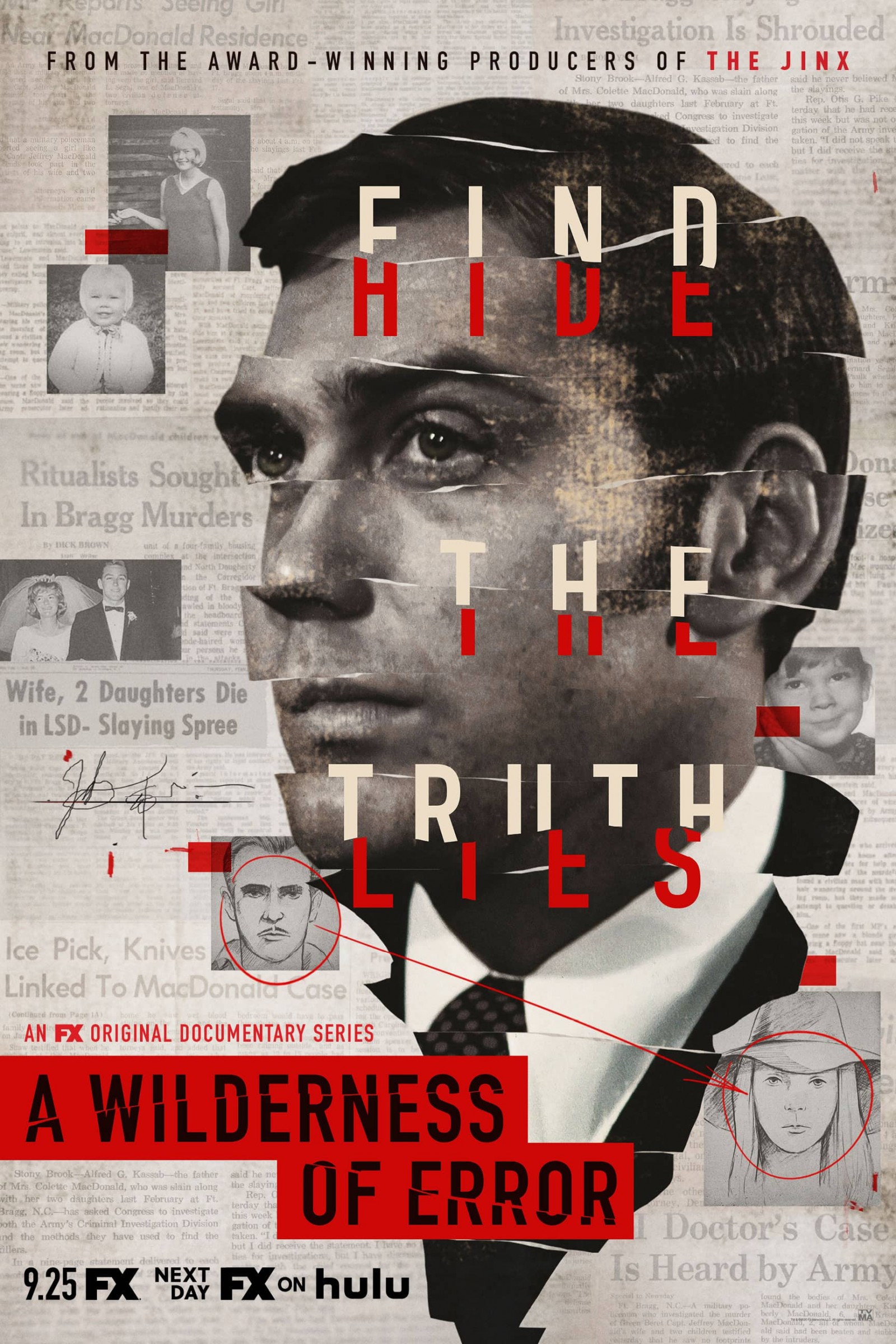 FX today announced that A Wilderness of Error, the latest in its slate of docuseries and documentary features, will premiere Friday, September 25, at 8 p.m. ET/PT on FX, and the following day on FX on Hulu. The premiere will include the first three episodes airing back-to-back-to-back from 8 p.m. – 11:30 p.m. ET/PT, with the final two episodes airing the following week.

From Emmy Award-winning producer Marc Smerling and Emmy Award-winning executive producer Jason Blum, producers of the groundbreaking and award-winning series The Jinx, comes a five-part documentary series, A Wilderness of Error, based on the best-selling book by Errol Morris who also appears in the series. Smerling directs and executive produces the series under his recently launched production company Truth Media, alongside executive producers Blumhouse Television (The Jinx, The Loudest Voice, The Good Lord Bird) and UCP (Unspeakable Crime: The Killing of Jessica Chambers, Mr. Robot, The Act), a division of Universal Studio Group. When Army surgeon Jeffrey MacDonald is sent to prison for killing his family, a storm of swirling narratives challenges our very ability to find the truth all the while overshadowing a chilling possibility: MacDonald may be an innocent man. Additional executive producers include Michael Jackson, Rachael Horovitz, Jeremy Gold, Marci Wiseman, Mary Lisio, Dawn Olmstead and Jessica Grimshaw. Jackson and Horovitz (Patrick Melrose) acquired the rights to the book and brought the project to Blumhouse.

In addition, Smerling in partnership with Sony Music Entertainment will be launching a companion podcast, Morally (In)Defensible, which follows the story of journalist Joe McGinniss in the writing of his smash best seller Fatal Vision, also about the MacDonald murders, prior to the airing of the docuseries.

A Wilderness of Error is the next entry in FX Networks’ growing library of docuseries and documentary features. It follows the success of The Most Dangerous Animal of All and AKA Jane Roe.

FX is the flagship general entertainment basic cable channel of FX Networks. Launched in June of 1994, FX is carried in 85 million homes. The diverse schedule features a growing roster of critically-acclaimed and award-winning hit drama series including Snowfall, Pose, Mayans M.C., Taboo and the upcoming Redeemer; the critically-acclaimed limited series American Horror Story, Fargo, American Crime Story, FEUD, Fosse/Verdon and the upcoming Shōgun, and Great Expectations;acclaimed hit comedy series including Atlanta, Better Things, What We Do in the Shadows and Breeders; the half-hour series Mr Inbetween and the Untitled B.J. Novak Project; a slate of docuseries and documentary features, including The Most Dangerous Animal of All, AKA Jane Roe and the upcoming A Wilderness of Error; and the FX Original Movie A Christmas Carol. FX is the former home of the critically-acclaimed and award-winning hit drama series The Shield, Nip/Tuck, Rescue Me, Damages, Sons of Anarchy, Justified and The Americans. The network’s library of acquired box-office hit movies is unmatched by any ad-supported television network.

Blumhouse Television has earned critical acclaim and numerous honors for its dark, edgy fare including Emmy awards for its productions of HBO’s The Normal Heart and The Jinx, as well as the prestigious Peabody award for The Jinx and the documentary How to Dance in Ohio. Blumhouse Television launched as an independent studio in 2017 with funding from ITV. Projects since the studio launch include Golden Globe® and Emmy nominated HBO limited series Sharp Objects; Golden Globe, Critics’ Choice and Writers Guild award nominated Showtime limited series The Loudest Voice; upcoming Showtime limited series The Good Lord Bird starring and executive produced by Ethan Hawke and based on the award-winning novel by James McBride; and an eight-film anthology for Amazon Prime premiering 2020. The studio produced The Purge on USA Network from writer/director/producer James DeMonaco and based on the popular film franchise; the holiday themed anthology event series Into the Dark for Hulu; and anthology series Sacred Lies created by Emmy nominee Raelle Tucker. Blumhouse continues its true crime docuseries tradition with No One Saw a Thing on Sundance Channel, upcoming A Wilderness of Error for FX from Marc Smerling and with Errol Morris, and projects in development at Netflix, Oxygen and Epix. The studio continues to develop award-winning and critically acclaimed documentary films including A Secret Love produced with Ryan Murphy for Netflix; Pray Away, an official selection of the 2020 Tribeca Film Festival; and Pharma Bro, an official selection of this year’s Hot Docs Festival about “the most hated man in America,” Martin Shkreli. Past documentary films include Writers Guild Award® winner Bathtubs Over Broadway and winner of the 2018 Sundance Audience Award This is Home. Blumhouse Television is the latest venture from Jason Blum, founder of Blumhouse Productions, which is widely recognized for its pioneering model of producing high-quality micro-budget films including The Purge, Get Out, The Invisible Man and Halloween.

UCP, a division of Universal Studio Group, is a premium content studio that operates with a curated indie sensibility, while simultaneously leveraging the power and scale of NBCUniversal. As advocates for creators with an eclectic point of view, the UCP team develops pioneering and award-winning scripted and documentary programming.  UCP’s content library also features more than 800 hours of award-winning and critically-acclaimed content. The studio’s podcast platform UCP Audio produces original scripted and unscripted podcasts.

Truth Media is a podcast and television production company founded by Marc Smerling, the Emmy Award winning and Academy Award nominated producer, writer, director and cinematographer who has been a pioneer in telling true crime stories,  With a focus to develop projects that continue to expand how people think of true crime, Smerling opened Truth Media in 2018 out of an old factory building in Brooklyn now converted into a full-service production and post-production facility. In an exclusive partnership with Sony Music Entertainment, his team will create investigative podcasts, including the upcoming Morally (In)Defensible, a companion to Smerling’s nonfiction television series, A Wilderness Of Error, with Errol Morris, and produced in partnership with Blumhouse Television for FX Networks.

Smerling’s credits include producing the landmark documentary film Capturing the Friedmans (2003), which was nominated for an Academy Award for Best Documentary Feature and won 18 major international prizes including the Grand Jury Prize at the Sundance Festival and the New York Film Critics Circle Best Non-Fiction Film award.  He produced and shot The Jinx – The Life and Deaths of Robert Durst, a six-part series about Robert Durst, which aired on HBO in 2015, that received six Primetime Emmys nominations including Best Cinematography for Smerling and won for Outstanding Documentary or Nonfiction Series. The Jinx also won a Peabody Award and led to the arrest of Mr. Durst for the murder of his best friend in California. Smerling also co-wrote and produced the narrative feature All Good Things (2010) starring Ryan Gosling, Kirsten Dunst and Frank Langella, and produced the acclaimed documentary Catfish (2010) released by Universal Pictures. He is also executive producer of Catfish: The TV Series.

In addition, Smerling laid the path for the explosion and popularity of true crime podcasts when he created and hosted Crimetown with Zac Stuart-Pontier and Gimlet Media in 2016. The second season of Crimetown (2019) featured Detroit’s controversial mayor, Kwame Kilpatrick, who is currently serving a 28-year sentence in federal prison. Crimetown has almost 100 million downloads worldwide. Smerling also produced The Ballad of Billy Balls, ranked No. 2 on The Atlantic Monthly’s Top  100 podcasts of 2019, and The RFK Tapes. Both Crimetown: Providence and The Ballad of Billy Balls are being developed for scripted television series at major studios.

Tags
A Wilderness of Error FX