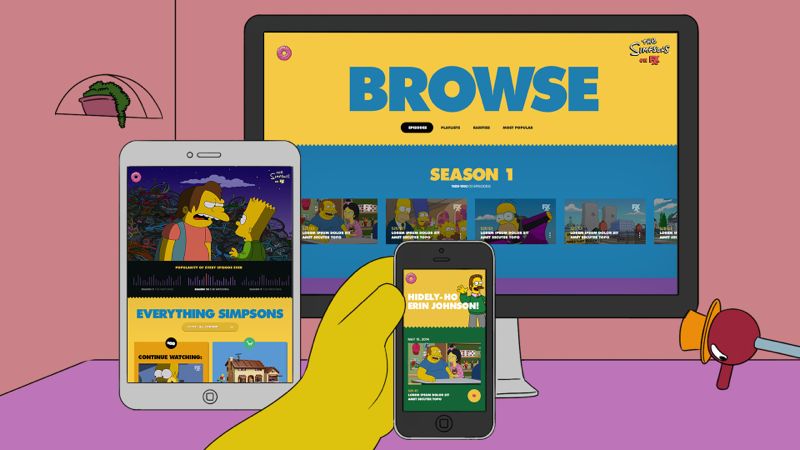 FX Networks will unveil “Simpsons World,” a new immersive, interactive digital and online experience centered on the legendary Emmy® Award winning animated television series The Simpsons, tomorrow, October 21.  Offering a unique experience for both casual and super fans, “Simpsons World” will provide authenticated users with the most user-friendly, comprehensive hub for all things Simpsons.  It will include a deep catalog of clips, fun facts and, for the first time ever, instant and on-demand access to every single Simpsons episode – all 552 episodes (25 Seasons) – and each new episode from the current 26th season will be available for viewing the day after its original broadcast on FOX.   The tailored Simpsons experience will be available via SimpsonsWorld.com, as well as the FXNOW app for iPhone, iPad, Android phones and tablets, Xbox One, Xbox 360, AppleTV, and Samsung Smart TVs.

“We are thrilled to offer Simpsons fans a rich and immersive experience unlike any other,” said Chuck Saftler, President of Program Strategy and COO, FX Networks. “Featuring an unprecedented amount of digital content at their fingertips, ‘Simpsons World’ allows users to engage with this beloved property in a whole new way and we’re excited to see how this dynamic experience is embraced by fans.”

“The Simpsons is one of the greatest shows ever made and our goal was to create a site that pays homage to this classic iconic brand while delivering a rich, personal experience,” said Stephanie Gibbons, President of Marketing and On-Air Promotions, FX Networks. “Fans will be able to seamlessly move in and out of the deepest digital archive of any TV series online ever – wherever they are and however they want – and dive deeper into this colorful world through many additional features built into this site.”

“Simpsons World” features include:
·         Video content that will greet users the moment they enter the experience
·         All 25 Seasons of The Simpsons and each new episode from the current season (one day after its original broadcast on FOX) will be available at users’ fingertips
·         “Everything Simpsons,” a dynamic newsfeed showcasing the latest Simpsons news, social media updates, “Did You Know” fun facts, featured episode playlists and clips
·         “The Simpsons Heartbeat” which organizes the complete catalogue of episodes by popularity
·         A premium video player that will provide recommendations to other clips and episodes users would enjoy as well as the ability for users to share content on their social networks
·         A simple, intuitive way to browse through the catalogue by season, playlist, most popular episodes and exclusive video content
·         A responsive search function allowing users to find video of their favorite characters and guest stars in the entire catalogue or any of the nearly 3,000 clips

“Simpsons World” will continue to expand its premium content in early 2015 with additional exclusive offerings including “Explore Characters” featuring special character moments, character bios, images, etc.; “Episode Guide” offering time-synced “Did You Know”/“You May Have Missed” fun facts and a script view allowing users to follow along with the episode and share their favorite quotes on social media; and “Advance Search” making every word of dialog from every single episode searchable so that so users can engage with the experience in new ways.

The FXNOW App is available to download for free on the App Store for iPhone, iPad and iPod touch or at www.AppStore.com.

Android Phone and Tablet users can download the FXNOW App on Google Play.