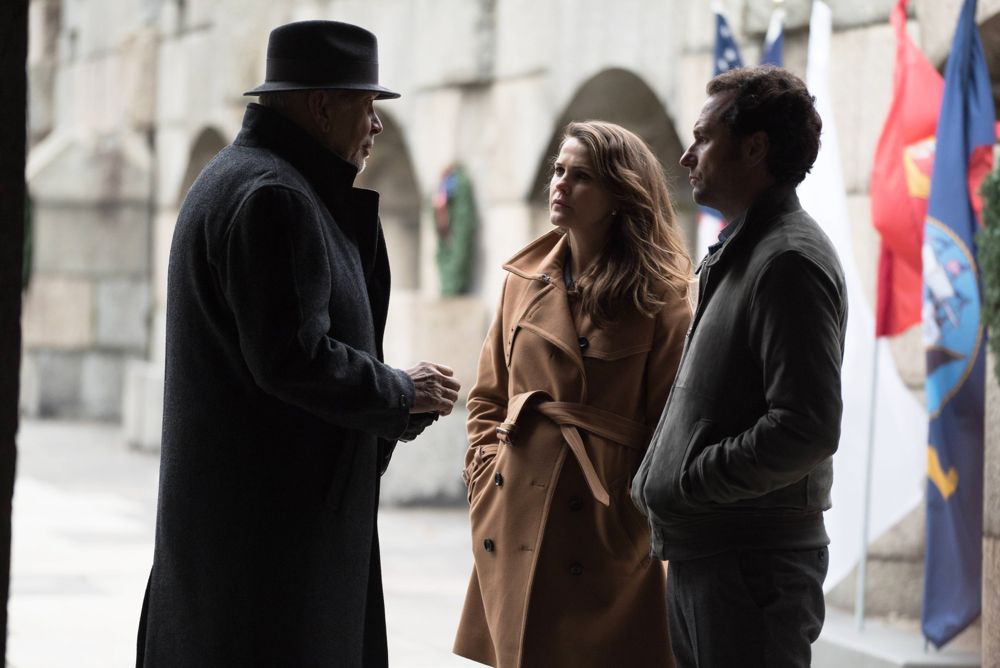 Ryan Murphy serves as Executive Producer along with Executive Producers Tim Minear, Alexis Martin Woodall, and Dede Gardner and Brad Pitt of Plan B Entertainment. The series is produced by Fox 21 Television Studios.

The Americans will return for its fifth season on a new night, moving to Tuesdays starting on March 7 at 10 PM ET/PT. The Peabody-winning, Emmy-nominated series from Joe Weisberg and Joel Fields has been named an AFI TV Program of the Year for each of its first four seasons. The series also received the Television Critics Association (TCA) Award for Outstanding Achievement in Drama in each of the past two years and continues to be one of the most critically-acclaimed series on television.

Set in the 1980s at the height of the Cold War, The Americans is a period drama about the complex marriage of two KGB spies posing as Americans in suburban Washington D.C. The arranged marriage of Philip (Matthew Rhys) and Elizabeth Jennings (Keri Russell) grows more passionate and genuine by the day, but as the pressures and demands of the job grow heavier, the personal toll becomes almost too exhausting to bear.  Having revealed their true identities to their teenage daughter, Paige (Holly Taylor), Philip and Elizabeth’s ability to protect their cover and their family’s safety has become even more tenuous. Even as Paige pushes her parents to bring her deeper into their confidence, Philip and Elizabeth struggle to maintain normalcy in their family, especially around their son, Henry (Keidrich Sellati).  Paige’s budding romance with Matthew, the son of their neighbor, FBI Agent Stan Beeman (Noah Emmerich), further complicates matters since Stan – Philip’s best friend – remains the greatest threat to the Jennings’ safety.  He and his partner, Agent Dennis Aderholt (Brandon J. Dirden) are on the task force that seeks to uncover the Soviet Illegals living among them. After Stan’s KGB lover/asset Nina was sent back to Moscow and executed for treason, he cultivated a relationship with KGB officer Oleg Burov (Costa Ronin), who, torn between duty and conscience, shared top Soviet secret intel with Stan that allowed the FBI to avert a potentially catastrophic loss of life.  Disillusioned with the KGB, Oleg returned home to Russia, but he is finding it harder to escape his past transgressions than he had hoped.  As the Cold War rages on, paranoia on both sides reaches new heights, making Philip and Elizabeth’s work increasingly vital – and eminently more perilous.

The Americans was created by Joe Weisberg who, along with Joel Fields, serves as an Executive Producer and Writer. Graham Yost, Chris Long and Stephen Schiff are also Executive Producers, along with Amblin Television heads Justin Falvey and Darryl Frank, and Joshua Brand is Consulting Producer. The Americans is produced by Fox 21 Television Studios and FX Productions.

Archer moves to FXX for its eighth season on Wednesdays, starting April 5 at 10 PM ET/PT. Archer is an animated, half-hour comedy that revolves around the hardboiled private eye Sterling Archer and his quest to find his partner’s killer in 1947 Los Angeles. The case proves to be more difficult than expected after Archer quickly gets mixed up in a deadly game of tug of war between Los Angeles’ most powerful crime bosses. Every clue leads Archer further away from his goal and deeper into a mystery involving kidnapping, prostitution and drug addiction. The series features the voices of H. Jon Benjamin, Jessica Walter, Aisha Tyler, Judy Greer, Chris Parnell, Amber Nash, Adam Reed and Lucky Yates.

Archer was created by Adam Reed and Floyd County Productions and is executive produced by Reed and Matt Thompson. Archer recently received the Emmy® for Outstanding Animated Program. The show is produced by FX Productions.