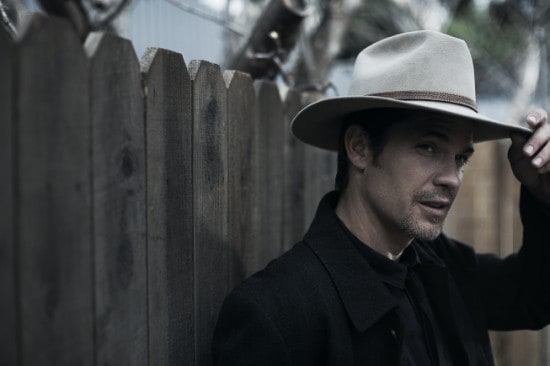 The Emmy® Award-winning Justified returns for its fourth season on January 8, and will continue to run Tuesdays at 10 PM ET/PT.  Developed by Graham Yost and starring Timothy Olyphant, Justified is based on the works of crime novelist Elmore Leonard, including Leonard’s short story “Fire in the Hole.”  In Season 3, Deputy US Marshal Raylan Givens (Olyphant) faced off against dirty politics, hidden fortunes, a mysterious criminal ringleader named Limehouse, and Quarles, an ambitious gangster from the underbelly of Motor City. This January, Raylan will start to pick at the thread of a cold case over 30 years in the making, unraveling a riddle that echoes all the way back to his boyhood and his criminal father’s bad dealings. Meanwhile, Boyd Crowder (Walton Goggins) finds his grip on Harlan loosening due to a Pentecostal preacher with a penchant for theatrics and a knack for manipulation to rival his own.  Yost is an Executive Producer, along with Leonard, Carl Beverly, Sarah Timberman and Fred Golan. Justified is produced by Sony Pictures Television and FX Productions.

Anger Management will begin its back-90 run on Thursday, January 17 with consecutive episodes at 9:00 & 9:30PM before moving to its regularly scheduled timeslot of Thursdays at 9:30 PM ET/PT.  Charlie Sheen stars as “Charlie,” a non-traditional therapist specializing in anger management.  He has a successful private practice, holding sessions with his group of primary patient regulars each week, as well as performing pro bono counseling for an inmate group at a state prison. Charlie thrives on the chaos in his life while still battling his own anger issues.  His life is complicated by his relationships with his own therapist/best friend, an ex-wife whose positive outlook but poor choice in men frustrates Charlie, and their 13-year-old daughter who has OCD.

FX’s acclaimed animated series Archer returns for its fourth season starting January 17 and will air Thursdays at 10 PM ET/PT.  Archer is an animated, half-hour comedy that revolves around the International Secret Intelligence Service (ISIS) and the lives of its employees. Although their work of espionage, reconnaissance missions, wiretapping and undercover surveillance is daunting and dangerous, every covert operation and global crisis is actually just another excuse for the ISIS staff to undermine, sabotage and betray each other for personal gain.  The series features the voices of H. Jon Benjamin as the highly skilled and incredibly vain master spy “Sterling Archer;” Aisha Tyler as Archer’s fellow agent and ex-girlfriend “Lana Kane;” Jessica Walter as Archer’s domineering mother and the director of ISIS, “Malory Archer;” Chris Parnell as the easily intimidated comptroller-turned ISIS agent “Cyril Figgis;” Judy Greer as Malory’s loquacious secretary, “Cheryl;” Amber Nash as the discordant director of human resources for ISIS, “Pam Poovey;” Adam Reed as the gay voice of reason at ISIS, “Ray Gillette;” Lucky Yates as ISIS’s possibly mad scientist, “Krieger;” and George Coe as Archer’s elderly and always exploited butler, “Woodhouse.”

FX will premiere its newest original comedy series Legit, on January 17 at 10:30 ET/PT immediately following Archer. In Legit, Jim Jefferies is an edgy, foul-mouthed stand-up comedian from Australia, in his mid-30s and living in LA, struggling to make his life and career more “legit,” only to find it a difficult, uncomfortable uphill struggle every step of the way. Jim is encouraged in his quest by Steve (Dan Bakkedahl), his neurotic best friend and roommate, a cyber-law library salesman who struggles to stay on his feet in the wake of a divorce, and Steve’s brother, Billy (DJ Qualls), who suffers from advanced staged Muscular Dystrophy and is confined to a wheelchair. Legit stars Jim Jefferies as ‘Jim,’ Dan Bakkedahl as ‘Steve’ and DJ Qualls as ‘Billy.’ Peter O’Fallon, Jim Jefferies, Rick Cleveland and Lisa Blum serve as Executive Producers. The series is produced by FX Productions. FX has ordered 13 episodes of Legit.

SPARTACUS WAR OF THE DAMNED Poster